Rudy Cullen: The jazz-tinged singer / songwriter with a passion for worship

Tony Cummings met up with one of the worship leaders at KingsGate Community Church, RUDY CULLEN 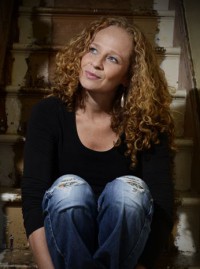 New Zealand-born, Cambridge-based Rudy Cullen is a heartening example of how possessing a huge musical talent but never having come to any level of high profile "success" has not left her with any trace of bitterness towards a music industry which can sometimes bestow accolades and financial rewards on artists of far less musical abilities. In fact, this singer, songwriter, music teacher and worship leader exudes a joyfulness and inner contentment which is truly appealing. Her rich, soulful, jazz-imbued voice, after years of being heard in churches, concert halls, jazz clubs and all manner of venues, finally got showcased with the release in 2013 of her solo album appropriately called 'Set The Record Straight'. And now her powerful tones will soon be heard on a worship album to be released by KingsGate Community Church, the second such album on which Rudy has featured as one of the church's worship leaders.

Rudy was born in Palmerston North, New Zealand to a British mother and a Kiwi father. She became a Christian when she was 16. She met her future husband, Jon, while at school and she and her husband were powerfully affected by the Parachute Music Festival - for many years the largest Christian music event held outside the USA. Rudy remembers, "[They were] happy days for us; we just hung out there every summer. Some guys who were heavily involved with Parachute, Wayne and Libby, were youth leaders when we were youth, so we had the privilege of learning about God with incredible leaders who were also phenomenal musicians - and absolutely still an inspiration. They've just released two books on worship, which I've read. They are still working with the Body of Christ, in worship with young people. Faithful people."

Mr and Mrs Cullen left New Zealand to live in Peru. Rudy explains, "Our initial intention was to live and work in a Third World country with a local church. We had sponsorship connections through Tear Fund in New Zealand, and children we had connections with in Peru, Bolivia and Guatemala; so we made that a travel itinerary. Our intention was that one of us would earn money, and the other would work for the local church in whatever capacity was helpful. That was about as solid as the plan was. As it turn out, I got a job. I'd trained as a music teacher - I've got a music degree and a teaching degree - so I worked in Lima for just under five years teaching music in an international secondary school. We didn't know Spanish until we got to Peru but living within the culture a year, we were pretty fluent. My husband went and learned Spanish in a language school, and I just picked up street Spanish."

Rudy was soon leading worship in Spanish in a local church. She recalls, "It was a lot of joy. That's when you learn to rely on the Holy Spirit, because you don't know what anybody is saying - one steep learning curve! I'd begun writing songs at school; I wrote my first song for some school project. For me our time in Peru was more about work and teaching."

Rudy and Jon came to England in 2005. Says Rudy, "My husband, who is an engineer, had begun to do some work in sustainability with the community in Peru and recognised there was a whole body of research around sustainability. His interest led him to get scholarships in Cambridge University, so we came initially for him to study, and now here we are 12 years and three children later - Leni (10), Mabel (six) and Vera (three). She quite likes being on the stage!" 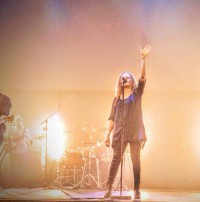 The KingsGate Community Church where Rudy serves has three centres, in Peterborough, Cambridge and Leicester. The pastor at the Cambridge centre is Simon Deeks with KingsGate's senior pastors Dave and Karen Smith. In 2013 the church released the live worship album 'Faithful'. It was produced by KingsGate's head of worship Simon Benn and among the songwriters and worship leaders featured on the project was Rudy with the song "Bow Before", written by another of the church's gifted singer/songwriters, Keith Hammond. Rudy also co-wrote with Simon Benn the song "Remembering".

Also in 2013 Rudy's 'Set The Record Straight' album was released, a project which represented three years of songwriting and recording. It was enthusiastically received by Cross Rhythms who wrote, "Her songs are deft observations on life and the Kingdom with the haunting "Light" and the moving "Call Heaven Home" particular standouts" while a customer review on iTunes enthused that Rudy's was "one of the most amazing voices that one can hear. . . very soulful and inspirational. . . and will blow a fresh wind through the genres of gospel and jazz."

In recent times Rudy has been concentrating on writing songs specifically for congregational worship. She responds to the question as to what inspires the songwriting process, "A daily walk with the Lord means daily time with him. I do read the Bible every day and have devotion time; in the same breath, I've got a book that sits in my bag that's always with me and I'm always writing. Every conversation, someone might say something and I'll think, 'That's a great way to say that'. I'll come home and work on one line; I sort of say, 'Every day is a great day for a new line'. My friends are used to it now. If I stop listening halfway through a conversation, it means a song idea has come and I'm not actually listening to them anymore. I don't think I can separate the two."

At the end of October 2015 Rudy was one of the worship leaders recording the new KCC album. Rudy was hugely touched by her involvement in the project. She explains, "This album is far more large scale than 'Faithful', more ambitious musically and in some ways more intimate. It also became a faith statement during the course of its completion. Many songs resonate with the idea that no matter what we face in life, we will stand firm and peaceful in the love of our very great God. There were double the amount of people in the congregation for the recording night. Before a note was played there was joy and expectancy in the room. We were praying as a team with our Senior Pastors about an hour before we began and the presence of God in the prayer meeting was very strong. At one point the team broke out into a spontaneous chorus of 'All Glory to God who is able. All power and praise'. There was a sense right then of remembering that although there was a lot to concentrate and focus on, this album, these songs are first and foremost worship." 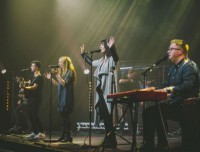 Rudy speaks about two of the songs on which she sings lead featured on the album which, like its predecessor, was produced by Simon Benn and will be released around March next year. "[The song] 'Now, More Than Ever' is a declaration of our persevering faith. Every 10 weeks our church fasts for three days and we end the fast with a praise and worship night. This particular night we had a visiting pastor with us and he began praying and prophesying, speaking life into words, prayers, dreams that we as a church have not yet seen come to pass. He kept repeating this phrase, 'Now, more than ever'. It immediately sounded rhythmic to me, and the song was written before the meeting ended. Some songs write themselves!"

Rudy continues, "Others you have to fight for. I wrote 'Still Small Voice' and rewrote it 15 times before we landed the version you will hear on the album! It is a prayer. I began writing it one day when I felt burdened about things happening to ones I love. I felt like I had no solutions, nothing to say to help, no idea of a way around their situations. We had a house full of people that day and I remember locking myself in the bathroom and leaning against the door saying, 'Lord just give me a moment, one moment, it will be enough, let me hear your still small voice... I don't need to know the answers, I just need to know you're here'. Later that night I took that to my piano and wrote the chorus for that song. 'It's your still small voice I'm listening for/Let me hear, let me hear, let me hear it/It's your holy presence I adore/I draw near, I draw near. . .'"

I had the privilege of attending the live recording of KCC Now more than ever album.
Rudy is an amazing worship leader who not only has great vocal cord ability but a real heart, a real anointing to bring the tangible presence of Our Great God and Saviour Jesus Christ to earth.
Now more than ever The Christian Church needs worship leaders like Rudy who know their identity in Christ and who are passionate about touching heaven and bring Christâs Kingdom to earth.