Jazz is gradually being reclaimed for God and award-winning vocalist RUTH NAOMI FLOYD is helping lead the charge. She spoke to George Luke. 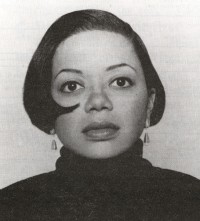 Every now and then an artist comes along who completely redefines the musical genre to which they belong. For years, what constitutes jazz gospel has leaned more towards the Kenny G end of the jazz spectrum than, say, the Billie Holiday end. That could all change now, thanks to the belated UK release of 'Paradigms For Desolate Times', the debut from jazz songstress Ruth Naomi Floyd.

Ruth was born and raised in Philadelphia, daughter of the Rev Melvin Floyd, a local minister noted for his unconventional methods (which include placing a fake corpse on top of his church van to emphasize the dangers of drug taking). While still very young, Ruth sang in choirs and with her sisters as a trio, the Floyd Sisters.

"Our parents wanted us to have a strong foundation in classical music," Ruth recalls. "I started studying classical music at age eight with piano. A year later, I moved on to flute, and three years later to bassoon. My mother's the one who purposed in her heart that her children would know music, and she really sacrificed. We'd sometimes have to sacrifice dinners in order to make the music lessons.

"I became a Christian at age seven, and in the teenage years I said, 'Okay, I want to make sure I have an understanding of what I was living in, and who I believed in.' So I took a week or two to do that; some self-evaluation and made sure it was something I deeply desired and wanted to do."

In 1993, Ruth had the opportunity to go to France as a guest vocalist with a French band, the Cocktail Madison Trio. She went with Bill Edgar - a resident minister and professor of theology, as well as a jazz pianist. The French were ecstatic; in the town of Peyrolles Ruth was awarded the Peyrolles-En-Provence Town Medal.

"While in France I decided that I wanted to communicate a positive, spiritual message - and most importantly, a Christian one - through lyrics with the style of jazz as the music base," Ruth says. "I'd studied jazz all through high school; I went to an all girls school and was in a girls' jazz band. I really began listening to jazz seriously in high school and in my early 20s.
"I'd been singing all my life, but I really wanted to communicate the gift of salvation through Jesus Christ, and a message of hope, in the musical style of jazz, because that's so culturally aligning in American tradition - it's one of the purest forms of American music there is, and I wanted to present a kind of a hybrid - but with original compositions; that was real important. I wanted to keep fresh ideas, fresh jazz music and original compositions, geared towards a Christian message."

The result was the 12-song set 'Paradigms For Desolate Times', recorded in 1994 and premiered at the Painted Bride Arts Centre in Philadelphia in December of that year. Almost immediately, Ruth's music met with disapproval from Christians, with one minister accusing her of 'contaminating' the gospel message with jazz music.

"The resentment towards jazz goes back to American history," Ruth explains. "When jazz music first came around, it became a competition between the church and the bars round the corner for the young people in the neighbourhood.

In the '40s and '50s, it became labelled as the devil's music, because it was associated with gambling, shady characters and drinking. People believed what was printed - and in some cases, evidenced in some of the great jazz leaders of our time - of substance abuse and things like that. They just threw the baby out with the bath water.

"Where I grew up, we didn't listen to jazz; we listened to gospel or classical. Jazz was deemed as equal to rock and roll. That was the minister's feelings; he felt that the message was good, but I was contaminating it with 'secular' music. I told him that from a cultural aspect, it was all derived from a time when our people (African Americans) were oppressed, from the spirituals. All these beautiful types of music come out of that oppression; jazz, blues, gospel - spirituals laid the foundation for all those types of music, but trying to get that across didn't work well. And then I've had people who just won't accept the album or play it, because they believe it's compromising."

On the other hand, the secular jazz industry has been very accepting. "I've not had any sort of comments or attacks from them at all. They'll listen and say, 'She's singing about her Christian faith. Okay, cool,' because there are a lot of jazz musicians who proclaim their different beliefs, whether it's new age, or Bhuddism. It's totally acceptable and embraced by that industry, but not by Christians -which is a little sad, but didn't surprise me."

Unique Ruth's style might be, but, as she points out, "This kind of jazz gospel is nothing new. Mahalia Jackson sand 'Come Sunday'; Marion Williams recorded an album with Ray Brown and Milt Jackson in 1964, and also recorded with Wynton Marsalis on 'In This House On This Morning', so it's been done before, but not that much."

Getting radio airplay brought its own problems. "We approached a couple of (Christian) radio stations that were at first interested; they loved the message, looked at the CD jacket and said, 'Okay, these are Bible based lyrics and this is a message of hope based on the Gospel, great.' They heard it and they were like, 'Oh!' (especially with 'Or Truth', which is a really aggressive jazz track)

'We don't know what to do with this kind of music' When they thought of jazz, they were thinking of a couple of jazz chords here and there, or a jazz arrangement of a spiritual, but they weren't used to original compositions done in a true sense of jazz music composition and playing, where the instrumentalists are allowed to solo and bring their own experience and knowledge to the tune, and then it comes back to the vocalist. Given that format, I think it was something of an enigma to the Christian music industry. Even today, it's tough to get some of the tunes airplay on Christian stations, because the music is just too jazz for them."