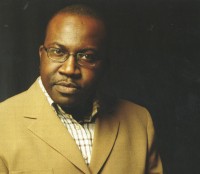 Tony:Â  I have got with me today Pastor David Daniel and we are timing it with a brand new album which has just come out called "Praise Goes First", and also David will be telling me about his history in gospel music.Â  David, do I call you David or do I call you Pastor?

Tony:Â  David, you've have got quite a history yourself in gospel music.Â  Before we are getting started talking about the new album, could you fill me in a bit on some of the gaps.Â  How did you get involved in gospel music?

David:Â  For me it started actually in my church, as a youngster in the youth choirs and it kind of started from there.Â  In our church it didn't start off as a mainstream pentecostal church, it was a brethren church and it is now an evangelical church and so hymns were our heritage, and together with, you know, the word of God and everything, I kind of started off singing with the choir as we tried to do a bit of gospel music.Â  As time went by I was playing the trumpet, I joined a group, a gospel jazz funk group when I was in my teens called "Clarity".

David:Â  I believe so.Â  I believe Simon is doing quite a bit of ministry now as well, a lot of preaching in his church.

Tony:Â  You were a member of Clarity - they were real pioneers, because of course back then the church could not really get on with the whole funk idea could they?

Tony:Â  You were a seriously funky band!

David:Â  We tried to be.Â  We were just doing the music of our time and we were just trying our best.Â  We were very sincere and was just trying to get the message into people's lives and to try and communicate.Â  You see, yet many churches didn't really appreciate the music so sometimes we were at youth clubs and places like that.Â  It was a fantastic time.Â  It's from doing Clarity I got to meet some of the members of the Lapwing
and from that I became part of the LCGC.

David: Well actually I was head-hunted so I came at the very beginning.

Gospel music digs deeper than any other music throughout the world today. And those who make it so, and those who have made it so in the past, form an uncompromising band of Christian saints men and women, who have spent decades in contention with all manner of difficult circumstances.

Few performers have had it quite so tough as gospel singers and it shows in the way they commit themselves within a song: The Christian vision of deliverance from spiritual and social shackles has always held out the greatest hope to those with least to lose and the gospel song is essentially a song of deliverance. The real, breathtaking power of gospel singing cannot be understood as anything less than the ecstatic victory shout of a soul set free at last. There is no music quite like that of gospel music, no drama like the drama of Christians rejoicing, the sinners moaning and repenting, the tambourines shaking, and all those voices coming together in unity, crying holy unto, the LORD. I have never seen anything during my Ministerial life as an Evangelist, to equal the fire and excitement that gospel music carries, without warning can fill a church with the awesome power of God's glory.

Nothing that has happened to me since, can equal the majestic power and the glory that I sometimes feel when, in the middle of a worship song, I knew that I was somehow, by some miracle, really carrying, really singing, as they say, the WORD, when the church and I are singing and dancing, in anguish and rejoicing at the foot of the altar. So let your heart exult wordlessly into joyous song by breaking down all barriers in the immeasurable fullness of your countenance by the words of your songs, whether at the harvest table, in the vineyards, or elsewhere. For true, really, true gospel singers, groups or bands they will always worship God in Spirit and in Truth, and recognise that He and He alone gets all the glory, AMEN