Indianapolis singer/songwriter SALLY ANTHONY caught the ear of Mike Rimmer. Here he tells you why. 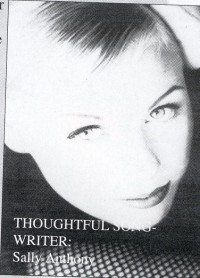 Hailing from Indianapolis, singer/songwriter Sally Anthony has produced a five track EP with the intriguing title 'One Word Poetry Contest'. I have to confess that it was the title itself that originally made me want to find out more!

Sally begins by telling me where she got the idea. "I was actually driving down a road in Tampa, Florida," she says, "and I saw the title on a small sign. It had been put up there with those little square plastic letters as the quote for the week. I thought it was such an interesting concept to have a poetry contest using only one word. It inspired me that a single word can mean so much and so many things to different people. Anyway, I decided at that point to name the CD after this concept, and with the advice of a friend, to have one-word titles for all of the songs. I love the title and would like to do more with it some day." She laughs, "You never know, maybe one day you'll hear about Sally Anthony's famous One Word Poetry Contest where you can win prizes like toasters and coffee mugs."

Like many independent artists, Sally is working hard taking care of both the business and creative angles of her music. With two others, she is running Elsie Records and taking a grassroots approach to the music industry. She states confidently, "Throughout the day, we take care of all the business associated with bringing my music to the public. Approaching it in this way allows us creative freedom and the ability to oversee our own business affairs." That creative freedom has paid dividends as already two songs from her EP, "Mary" and "Phil 4:11", have been used on a film soundtrack. She says, "The film stars Lauren Hutton and Burt Young and was directed by Jean Marc Vallee. As far as how the songs were chosen, while living in New York I had an encounter with producer/A&M recording artist AH Theodore. At that first meeting he asked me to send him a copy of the CD when it was finished. About a year later, I did just that, and he called me the day he got it explaining that he was the music producer for the movie, Loser Love, and he wanted to use my music in the film. Contracts went flying from the East Coast to the Midwest, and a couple months later, I was on my way to New York for the premiere."

Not many independent Christian music artists have such opportunities. I wondered how she felt. "The premiere was very exciting!" Sally responds. "First of all, it gave me an excuse to go back to NYC, which was cool in itself. The premiere was at a theatre in the Chelsea district of New York. It was very interesting to watch the actors on the big screen while sitting next to them. Let me tell you, you really had to be careful what you said! No comments on the physical appearance or acting ability of any of the actors, because most likely they could hear you or at least their mothers could! The best part of the entire experience was hearing the songs in the movie. That was a great feeling."

"Theysay" has been the song that grabbed me most from the selection and Sally says, "It is, simply put, a song about loving yourself. In my life, it is very important for me to be at peace and connected with myself so that I can care about and treat others with kindness."

In terms of her own song-writing, Sally describes herself, "I believe that I am an artist who is Christian." She is vulnerable and honest and has clearly spent time thinking through the issues of her artistry. Other people haven't always been encouraging. She states, "I think it is really hard for women who don't sing praise music to be accepted in the Christian music industry. I have had a Christian A&R rep comment on the fact that I am too much of an "angry young female". This was upsetting because if you look at my lyrics, I am anything but that. I feel that reactions like this are a result of religion as a whole, shaping our view of the woman as dependent and wanting us to come in a certain size and package, and I never want to aid that."

Uniquely individual, thoughtful and creative, Sally hopes to record a full CD in the autumn. I can't wait!