Pete Ryder: Not your run-of-the-mill songsmith

With past recordings like 'Will Your Soul Stay White While Your Body Goes Brown', 'A Mole Played Euphonium' and 'Beatrix Potter's Gun', PETE RYDER is a far from typical singer/songwriter. Tony Cummings went to see him in concert. 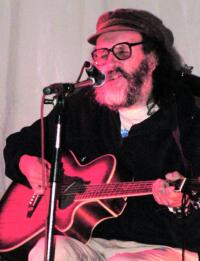 North of Manchester, in the bustling town of Rawtenstall, is a pub, the Stag's Head. Tonight they've got something a bit special on, a gig by singer/songwriter Pete Ryder. The upstairs room has been suitably decked out with tablecloths, flowers in vases, bowls of snacks and some classy wall hangings which I later learn come courtesy of another talented songsmith from the area, Breakspear. The room is nearly full when Pete, who's driven from his Northumberland village home, steps forward to ply us with his first song. Soon waves of laughter are rippling around the room as Pete, looking every inch the bushy bearded academic he is, effortlessly grips the crowd with laconic tales of Kevin and his turbo; an encounter with stuffed guinea pigs playing cricket found in a Bodmin Moor museum; a deceased mole catcher and a shocking discovery of a shotgun in Beatrix Potter's cottage. He introduces a song about a fossil with the aside that the number's "a bit wordy but you've probably got used to that by now." And indeed the crowd, gripped by every clever couplet, listens intently. Gradually some of his songs take on a more serious note, with "Dark Dream" complete with horrific apocalyptic images and by the time the singer closes with his only cover, a hugely powerful version of Sydney Carter's "On Friday Morning" and the self-written, quite beautiful "Waiting For The Floodtide", inspired by a visit to Holy Island in Pete's beloved Northumberland, themes of life, death and salvation are clearly conveyed for all who have ears to hear. Afterwards, in a nearby curry house, I spoke to this most unusual singer, songwriter, historic buildings expert, speleologist and author about his life and times.

Pete is an historic buildings expert delighting particularly in the glories of medieval and nonconformist churches and in fact his spiritual background is nonconformist. He grew up in the Salvation Army. "I really made a commitment through a crusader class at a Baptist church in my early teens but I can't discount the effect of lots of good things from the Salvation Army." The Sally Army was a bit of a musical influence to the teenager as well. "When I heard the Joystrings I learned all the Joystrings' guitar breaks! I can still play them to this day... they're quite simple!"

A bright student, Pete went on to university in Sheffield to study geology and geography. "At university, I actually found what you could call a really live church for the first time which was St Thomas Crook's, Anglican, and that was really quite a major commitment/re-commitment experience. My first year at university and reading CS Lewis helped a lot, too."

Pete was a research assistant in the geography department at Hull University for a few years and then moved into archaeology. He went back to Sheffield to work with the South Yorkshire Archaeology Service for seven years and then moved up to Northumberland to work on a survey of listed buildings for the re-listing of Northumberland for three years. "That was 20 years ago. Since then I have been a freelance buildings' archaeologist," explains Pete.

Musically Pete never stopped playing. "In my time in Sheffield I started writing songs and that always turned me on. I may not have done much with them but I've always sporadically had fits of songwriting and my hapless family have suffered the results and occasionally people of a wider audience as well!"

In the mid '70s Pete began recording, three vinyl albums, one with a group of friends from Sheffield, Paradise Square, and two with some musicians from Hull, Caer Paravel. Then in the '80s began what he calls "a long string of cassette tape albums." Pete summarises his impressive discography with refreshing modesty. "Some were terribly basic; a lot were recorded in a studio I still use now at Haydone Bridge. Since I moved to Northumberland I do most of my tapes there. One or two with friends, a friend called Francis Davies sang with me on a few. I doubt if I can remember all of those... "A Mole Played Euphonium" is one, "Will Your Soul Stay White While Your Body Goes Brown" was another - a song about a chapel that became a solarium. "Jumble" ...there are about half a dozen tapes in there. The first CD was 'Fossils', which is a collection of songs taken mostly from the tapes, then there was the double CD, the 'Upwards Sideways' collection, 'Crystal Stream And Gravity', then there was 'Feast Of Fools', the flashy one in the plastic cover and then since then there has been 'Forgive The Ghosts' and now 'Dark Dream', a six-song CD."

'Dark Dream' (reviewed in CR78 under its pre-release title of 'Summer Songs 03') shows Pete to be a witty wordsmith and a skilfully adept guitarist. Alongside all the humour and whimsy, his ability to make a profound spiritual point comes through. Was that his intention, I asked Pete. "I suppose so. I mean, I write what comes out and some of them do come out spiritually very sharp, I suppose. I like to write songs that I can use in a folk club anywhere and with one or two songs, 'Riches', for example, I've achieved that. I've had some non-Christian friends come back and say that that was the best song about that subject that they'd ever heard. Even though they can be hard-hitting, with a good song, you can get away with it."