Pete Ryder: His Barometer Is Right (But The Weather Is Wrong) 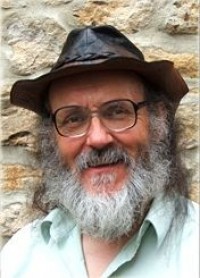 This week sees the release of the latest in a long run of albums by one of Britain's most original and idiosyncratic singer/songwriters, Pete Ryder. As well as being a folk-orientated singer/guitarist based in Northumberland, the veteran is an archaeologist, a Church of England reader and a raconteur par excellence. He is also a collector's item. As was explained in a recent Cross Rhythms article, the '70s albums featuring Ryder's singing and songs by Paradise Square, Cair Paravel and Pete Ryder & Sian Harry have today become "highly collectable", the rare vinyl releases now selling for huge sums.

It seems Ryder's early recorded history continues to haunt him. He told Cross Rhythms, somewhat ruefully, "I've just had a request by some company in South Korea to reissue 'Some Other Morning' (Cair Paravel's 1976 album) and 'On Our Way Home' (Pete Ryder & Sian Harry's 1977 release). Seems they have become very popular over there. There has also been an illegal reissue of 'Some Other Morning' in Japan. It is simply surreal."

One bright aspect about the unexpected interest in the Cair Paravel and Pete Ryder & Sian Harry oldies is that as well as bringing much deserved attention to Ryder, it also spotlights the exceptional vocal talents of Sian Harry - an association that with Ryder's new album 'My Barometer Is Right (But The Weather Is Wrong)' has now been re-established. Sian had been a member of Cair Paravel and then recorded the duet album 'On Our Way Home' with Ryder. But they subsequently went their different ways to pursue successful careers, Pete to work in architectural archaeology and Sian to work in Britain's prison service.

Then at Greenbelt 2009 Pete met up once more with Sian. He recalled, "I'd kept in touch with Sian - Christmas cards, etc. But we've only seen each other two or three times in the interim. We recorded the draft CD at a friend's house but on driving back listening to it I was so taken away with it I got caught by a speed camera. I know the track I was listening to and thinking wow. It's a camera I always drive past and I always slow down to 30. So it was a Â£60.35 pence fine and trip to a speed awareness course which was very interesting and quite good. I'm now more aware of my speed. In October Sian came up to the studio and we recorded the album. I think it's possibly the best thing I've ever been involved in. I'm very positive about it. Sian now heads up a charity called 'Why Me?' that promotes 'Restorative Justice' - introducing criminals to their victims and seeking reconciliation. For people who've been involved with their scheme, the re-offence rate is very low, way down on normal. It seems to be something that's very positive.

"Sian both sings and plays keyboards and is a very talented musician with a lovely voice. On this new album the final track is an oldish song called 'Life Behind The Sun', if you know C S Lewis you can see the phrase there. Sian managed to sing along with me, beside me and around me - quite remarkable. People said they never thought she could do that. Maybe I'm singing better."

Down the years Pete has released albums with decidedly unusual titles. So where did 'My Barometer Is Rich (But The Weather Is Wrong)' come from? The songsmith recounted, "I was doing some archaeological work in a village in Northumberland, chatting to a friendly old farmer and he happened to use the phrase 'my barometer is right but the weather is wrong'. I thought straight away - like a few news items I've seen - that's got to be a song. It's a very simple song."

One of the album's outstanding numbers is "The Last Of The Light". Said Pete, "Sian sings absolutely beautifully on that. It could be the best thing I've written. It's one of the songs you make your own meanings for. It's not specifically saying this is the message I've got to get across. It's quite a gentle song. I'm very pleased with the way that's worked out." 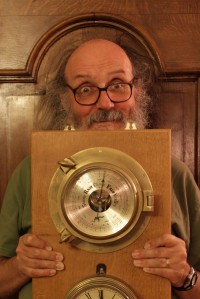 Pete's work as a buildings archaeologist often inspires songs. He recounted, "Last November I was on holiday in Toulouse in France with my wife. We went to Mass in the Basilica de Saint Sernin and this church was built a thousand years ago. I didn't understand the lingo, my wife did and she was hopping and steaming at things the priest said but I said that's his problem; I was enjoying the ambience. It struck me that I was part of something that had been going on for an awful long time. And whilst in the past I've been in small churches that have thought 'we've got it right, let's do it our way' my experience is that doesn't always work. All the same little problems came together and people squabbled over leadership and tiny points of doctrine. Looking at history, as I am doing now, this has happened time and time again. In the 17th century there were loads of little independent churches that did weird things.

"In Toulouse I found myself in a long-established church that had been worshipping in the same place for over a thousand years. I did not need to agree with all their practises; that was not the point; I was part of something that had been going on a long time. In the past that hadn't really been that important but it struck me and stayed with me and I later wrote a song called 'The Procession'. It's couched in political terms, about being part of a little group that thought they alone could change the world, but then seeing a procession of the ordinary people going past every day and in the end wanting to join in and be part of something bigger. That's how it reflected on me."

A listen to 'My Barometer Is Right (But The Weather Is Wrong)' confirms Ryder's conviction that this is his best ever work. The addition of Sian Harry's vocals give added musicality to Pete's thought-provoking lyrics while the production is a step up from some of the rough-and-ready sounds of the 20 albums he has released since he last recorded with Sian.

Pete spoke about his 2008 release 'Pour Les Petits Animaux' - a compilation of some of Ryder's frequent songs about members of the animal kingdom. "I speak very bad French. I love France and we went to France three weeks ago to Brittany. We got on the train, I was with my daughter and son-in-law and my wife, and we were travelling with a French couple. I introduced ourselves and the young pair. They live in the city in Edinburgh. I was trying to say we are country mice, they are city mice. What I actually said was they are mice of life but we are mice of truth!. They were very puzzled. That's the level of my French. It comes into my songs occasionally."

'Pour Les Petits Animaux' contains one of Ryder's best known songs, "Beatrix Potter's Gun", originally released on a 1991 cassette album written after the songwriter had visited the cottage of the famed children's author of The Tale Of Peter Rabbit and there discovered a shotgun used for dispatching the bunnies. Ryder remarked, "My daughter bought me a pair of flashing rabbit's ears. If you google Pete Ryder, Beatrix Potter's Gun I'm afraid you'll get a video of me sitting there with flashing rabbit's ears singing the song about the poor rabbit getting shot. We used ketchup all over the place, it was fantastic." So what did his colleagues in academia think of such activities? Ryder's response was to the point. "They think I'm crazy. What do you expect?"

This most eccentric of songwriters then went on to expound the merits of "Beatrix Potter's Gun". "In part it's a serious song. It's about protecting innocence. In a lot of these songs there's something in it. Another song on the album is 'Do Gerbils Have Souls'. That was written after our gerbils were consumed by the cat and the children asked questions - it's a real question. Were these worse gerbils than other gerbils? What goes on in the animal world? When I went to hear a theologian at Greenbelt, Stanley Hauerwas, he read a prayer he had written on the death of his Siamese cat and that got through to me because I'm a cat person. Animals are important to me. If there is a heresy on Christianity and cats I'd be a sucker for it."

As well as gerbils and rabbits, other animals celebrated in song on 'Pour Les Petits Animaux: The Bestiary Of Pete Ryder' are voles, pigs, wombats and on "Jurassic Tea Gardens" dinosaurs. Said Pete, "It's about the dinosaurs that are inside us. We all have a dark side, the dark side is the dinosaur - there are dinosaurs round every corner, dinosaurs practising their parts, dinosaurs in the shadows of our hearts."

Pete dares to be who God's made him to be including the as yet undiscovered Bob Dylan of Christian lyrics...