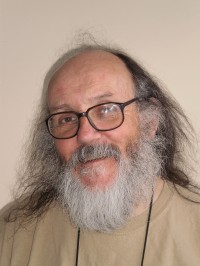 Music enthusiasts who have read recent Cross Rhythms articles on Water Into Wine Band and Caedmon will know that a phenomenon has gradually developed down the years concerning certain artists and their vinyl releases. Records released in the '70s as small-run pressings for a local following have, decades on, been declared "highly collectable" by fanatical record collectors so that when on the rare occasions that vinyl copies turn up on eBay, mind-boggling amounts of money are offered for the privilege of owning these rarities. Pete Ryder is a long-established, Northumberland-based, folk-orientated singer/songwriter who has recently discovered that, not one, but three, of his early recordings are today being bought and sold for eye-watering prices. The 1974 album 'Never Thought I'd See The Day' by Paradise Square, a group Pete formed with friends at Sheffield University; 'Some Other Morning' by Cair Paravel, a folk team formed with musicians from Hull; and 'On My Way Home' by Pete Ryder and Sian Harry are all considered collectors' items. I met up with Pete, who for the last three decades has been releasing a stream of independent albums of engagingly idiosyncratic songs, to talk about his first recordings.

Paradise Square consisted of Donovan Gibbons (guitar and vocals), Philippa Johns (vocals), Rashiba Qureshi (violin), Pete Ryder (vocal and guitar) and Philip Shepherd (guitar and vocals). Said Pete, "We weren't really a group. We rarely played as a group, just once or twice. Paradise Square is in Sheffield, by the way. Phil Shepherd and I used to play together with our lady singer Philippa Johns and we sang at a few people's weddings. It was very small scale but we wrote some nice songs."

'Never Thought I'd See The Day' was recorded at the YMCA in Sheffield. In his book Archivist: Vintage Vinyl Jesus Music, America's Ken Scott described the album as "positively gorgeous UK acoustic folk". He went on to describe how the "delicate duel acoustic guitar work and soft male/female vocals define the group's sound, combining to fashion a fragile melancholy presence on songs like 'Freedom', 'Bird In A Cage', 'Lullaby' and 'Rosemary's Song', the latter a strong contender for the most beautiful song I've ever heard."

Pete said about the album, "Phil had a very nice song called 'Never Thought I'd See The Day'. I still play my song 'A Song For Judas' live very occasionally. It was written during the era of Jesus Christ Superstar where Judas is portrayed as trapped by faith. 'It wasn't my fault. . . I had to do it,' sort of thing. And I was also tangling with a church which was very Calvinist which I couldn't cope with. So I put the two together - the free will and predestination thing. So 'A Song For Judas' had Jesus saying to Judas 'Yes, it's sad but you do have a choice, Judas, you know I love you but you're free to choose, to win or lose'." 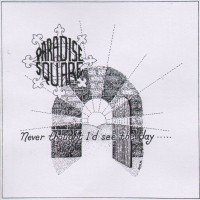 Pete spoke somewhat ruefully about today's interest in the album, "We only had about a hundred made altogether. I've got one very dog-eared one. You can imagine how amazed I was when, decades on, I saw a copy sell on eBay for almost a thousand pounds, nine hundred and something. I was staggered. Good grief! We could have reassembled the band and recorded it again for that!"

After the members of Paradise Square went their separate ways Pete moved to Hull. After a few performances with singer and mandolin player Maggie Delves he met up with some other musicians, Sian Harry (vocals and Keyboards) and Paul Stockdale (guitar and vocals) and a new band formed. Reminisced Pete, "We were Cair Paravel, which is the city from C S Lewis's Narnia Chronicles books. The genesis of the 'Some Other Morning' album was a local chappy, Robin Fugill, who wanted to record us and had a local recording studio; he managed us and he set up the recording. It was released on Koala Records - the small Australian animal. The studio loaned us Barry Walton, the bass guitarist, who I've been in touch with by email recently. We only ever saw him for a couple of weeks but he played bass well for us. Then there was Sian and myself and Maggie Delves who married my friend Phil from Paradise Square, though they didn't know each other then. There was also Paul Stockdale from Carlisle who I've lost touch with. I don't know what happened to him."

Pete continued, "Cair Paravel did a few things for the university's Christian Union but then I moved back to Sheffield and made a record in 1977, 'On My Way Home'. It was released on a small Christian label called Profile and was credited to Pete Ryder And Sian Harry. There was also a lad called Phil Shankland who played bass on it. He said, 'I don't want to have my name on the front because I just play bass.' He was in the worship team at St Thomas's Church in Sheffield. He's a good lad."

Talking about 'On Our Way Home', Ken Scott described it as "another endearing album of original folk songs," and though he goes on to say that "Pete's rather gravelly voice is not the most melodious on the planet," it "suits the folk style just fine," before enthusing that, "there's even a touch of Incredible String Band, especially on 'Spring Song' with its sitar-like lead guitar." Remembered Pete, "I did a series of songs on the Passion and there's one there, 'The Judge's Story' which is from Pontius Pilate's point of view. It's one I've hardly sung since but Sian played very nice piano on it. It was Pilate's thoughts afterwards, looking back on what he'd done. That was one I thought worked quite well. 'Goodbye Maisie Goodbye' was also a nice song. Again Sian's vocals were very good." 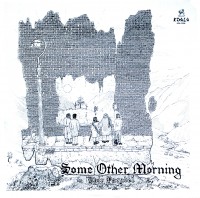 Amazingly, Sian Harry and Pete Ryder will shortly be featured on a new recording together. In the New Year Pete is planning to release the album 'My Barometer Is Right (But The Weather Is Wrong)' on which Sian is singing. After the '70s Sian went on to forge a successful career in the prison service while Pete became a much respected buildings archeologist. Cross Rhythms is looking forward to the belated reunion of these two Christian folk talents. Who knows, in three decades or so 'My Barometer Is Right. . .' may be selling for a fortune.

I was a friend of Pete and his wife Elaine back in the Seventies, and recently got in touch again through Facebook. As your article says Pete's voice is distinctive but he could (and probably still can) write a good tune and lyrics.

Great to hear your story Pete. 'Switch off the Mike Gordon' remains my favourite of your current songs.

Thanks for making it to Edinburgh for the Caedmon gig.
The new album 'A Chicken to Hug' is now listed on Amazon.