Sam Hill: The Lancashire singer/songwriter and friends with an acoustic-orientated concept album 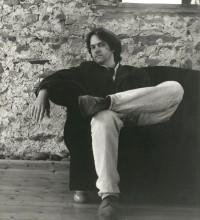 Throughout the history of the arts there have been occasions when like-minded artists have pooled their talents together in some form of united statement. During the 1930s, for instance, young English poets, such as W H Auden, Stephen Spender and C Day Lewis, contributed to collective anthologies which affirmed their shared political and personal views on the world around them. Similarly, in the world of rock music we have seen countless benefit albums and concerts by groups of artists often diverse in approach, but bound together by a common aim or beliefs -Band Aid, Red Wedge and The Simple Truth, to name but a few. However, these projects have almost exclusively presented, or sprung from, a non-Christian viewpoint, although they frequently address vital issues for believers such as injustice, poverty and ecology. Christian artists are uniquely placed to put forward God's heart for our world, and festivals such as Greenbelt and Cross Rhythms provide a breeding ground for musicians, poets and other creative folk to develop a prophetic voice for sufferers of injustice and oppression.

'Pray For The World - Unplugged' is one expression of this strong social conscience which has developed amongst Christians in the arts. It's not a benefit album in the financial sense, but a gathering of musicians, bands (and one poet) united in the assertion that Jesus provides the only solution for a battered and weary world. The project was organised by roots singer/songwriter Sam Hill, who began to work on it early in 1993; however, when I talked with him recently it turns out that the vision of such a compilation album goes back a good deal further.

"I've wanted to put together a compilation of British CCM for a while now, one which would give exposure to artists who wouldn't normally be heard," says Sam. "Greenbelt did one a few years back called 'Down By The River' [an excellent 1991 collection, to which Sam contributed his song "I Don't See No Good Time"], but I particularly wanted to showcase British Christian artists who also share a common social conscience." Although the majority of the musicians and bands on 'Pray For The World' incline in a 'roots' direction (hence the album's 'Unplugged' subtitle), Sam is quick to point out that this wasn't the main reason they were approached. "It was more who was suitable for the album - we decided we had to have Garth (Hewitt) on it, because his music has expressed a social conscience for many years and he's also acted on it in practical terms, with all his work in developing countries."

Sam also intended the album to provide a showcase for certain grassroots artists with a small or local following who share a similar vision, but who lack the resources to reach a wider audience. He found that the artists he approached were only too keen to contribute; indeed, all the songs contributed to the album were previously unreleased, and many were specially written. Appropriately for an album which provides a picture of the social and spiritual state of Britain in the 90s, the album undertakes a kind of journey around the British Isles, featuring artists from almost every corner of the nation, lain Archer from Northern Ireland contributes, for me, one of the album's strongest songs in "Ancient Dreams", whilst Scotland's finest, the Electrics, come up with "0 Lover Of My Soul", a cry for God to heal our decaying cities. Sam and his band, from Lancashire, perform "Do You Watch Too Much TV", and Derby duo Phil And John rework the Malcolm And Alwyn chestnut "Fool's Wisdom". Then it's down to Cheltenham and local heroes Eden Burning, giving frontman Paul Northup another chance to allude to his love of literature (he quotes from Joseph Conrad here) in the lyrics of the song "The World Revolves", then taking in the London-based Hewitt and Bill Drake (who sings the title song of the album) on the way down to Cornwall, where we meet The Wilsons. They are a real family group, consisting of father Gordon, mother Lynne and daughters Amy and Danielle, and together they perform with a sincerity and gifting capable of moving any listener. Their contribution is "For The Sake Of The Children", a plea for reconciliation between a separated husband and wife, seen from the viewpoint of their young son; this provides one of the most poignant moments of the album.

Linking the songs is the task of acclaimed poet Stewart Henderson, himself certainly no stranger to art with a social conscience. His vignettes of life in Britain today, ranging from the plight of the elderly ("We're Helping Old Ladies To Cross The Road") to a kind of poetic photo album of a city ("Liverpool Meditation"), complement the songs perfectly, and show that the pen can often prove as mighty as the piano. Indeed, one of the prime intentions of 'Pray For The World' is to complement, and raise awareness of, Operation World - the book by Patrick Johnstone which aims to provide a comprehensive picture of the social and spiritual state of the world's countries. To further cement the links between the two works, purchasers of the album are entitled to a discount off the price of the book.

If there's one thing 'Pray For The World' can't be accused of, it's being a kind of musical clique. Far from it. In fact, the organisers are actively suggesting that when artists under the PFTW banner are booked for events, local artists with similar concerns should be involved too, perhaps as support acts. Sam sees this as one of the positive things the PFTW project can achieve, "to give British artists the kind of exposure they wouldn't normally get."

Having got off to such a good start, could there be further PFTW projects in the future? Sam responds, "There could well be. It's been very encouraging to see how STL have backed us so strongly, not just with resources but funding too. British CCM is so often hamstrung by financial limitations and anything which can play a part in rectifying that has to be worthwhile! Also, I really believe Christian artists should stand up and make a statement about their society, and I don't think that need's going to disappear."

So if you'd like to support some homegrown artists, as well as allow yourself to be challenged about the world we're in, then you could do far worse than invest in both 'Pray For The World - Unplugged' and Operation World. It's also one of the best CCM albums you'll find this year. So why wait...?