Ohio rock band SANCTUS REAL have come a long way since they stood around at GMA week passing out free copies of their independent album. Tony Cummings reports. 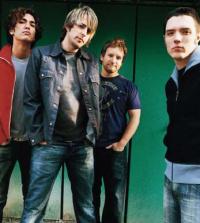 The continuing rise in popularity of the band Sanctus Real from Toledo, Ohio, has been impressive. Only three years ago the band's Matt Hammitt and Chris Rohman arrived at Nashville's GMA week with their backpacks filled with copies of their last independent CD. After passing out copies to all and sundry, back in Toledo the phone started ringing off the hook before execs from Sparrow Records came to sign the band. Sanctus Real's record label debut 'Say It Loud' sold well and now the band's new one, 'Fight The Tide', is already selling better than its predecessor. Certainly the band's infectious power pop, in the same breed as Foo Fighters and Weezer, with splashes of the anthemic (U2) and a touch of retro (Beatles), is an engaging sound. For Sanctus Real (Matt Hammitt, vocals/guitar; Chris Rohman, lead guitar; Steve Goodrum, bass; and Mark Graalman, drums) there has never been tortuous wrestling with the Christian music/mainstream divide. As Hammitt told CCM magazine, "Ultimately, we knew we could relate to kids in the church. We are passionate about our faith and we knew we could encourage Christian kids to keep their faith growing and, likewise, reach kids who never before heard the message. From our personal experience, we felt this was the place we were supposed to be."

One of the refreshing things about Sanctus Real is their determination to avoid the "make an album that sounds like Coldplay... Creed... whoever is popular" temptations of a unimaginative CCM industry. Commented Hammitt, "I don't want to say we're control freaks, but it's very important that what comes out of this band is us. We want to make sure we're making music that's honest to who we are. We must be passionate about the music because it addresses what we go through in our lives." They achieve that on 'Fight The Tide'. The band recorded the album over a six week period with producer Tedd T (Rebecca St James, Delirious?). "It's so much more diverse than 'Say It Loud'," said Chris Rohman. "We explored every option that we had in the studio. We wanted to find just the right thing to say and the right way to word it. We're fighting to take what's been instilled in our hearts and share the truth and joy that we've found without trying to hammer anything over anybody's heads."

There are plenty of strong songs on the project - "Things Like You" with its surprisingly acoustic presence; "Say Goodbye", a touching farewell from Chris to his great grandmother, a spiritual leader in his family; and "The Fight Song" written by Steve and Matt which applies not only to personal relationships but to petty disputes between believers.

The roots of the band go back to a small Christian high school in Toledo, Ohio. Hammitt and Rohman began playing in their chapel band. During their high school years they began making music outside the church which led to recruiting Graalman and, later, Goodrum. They played their first show during the 1996 holiday season. Remembered Hammitt, "My dad owns a photography studio that's in a warehouse and we did our first concert out of the back of the warehouse. We practised and practised, maybe had six songs and played for a handful of our friends from school. We have the show on video somewhere, which is pretty scary."

The group recorded a six-song cassette release and later a six-song EP 'All This Talk Of Aliens' before in 1998 releasing their independent album 'Message For The Masses'. To make some money Hammitt and Goodrum had to take on some not-so-glamourous jobs. Recalled Hammitt, "We did telemarketing for a few months and it had to be the most dreadful job ever," says Hammitt, who hawked auto glass over the telephone. "You have to call people at the most inconvenient times. We got death threats over the phone. One guy said he was going to come through the phone and strangle me." The worst ones happened when a person's car windshield had gotten cracked or chipped that same week. Hammitt continued, "It was like, 'That's funny, my windshield gets chipped yesterday and you're calling me today!' Those were the types who really wanted to come after us."

One thing which has developed for Sanctus Real is the recognition of Hammitt as an outstanding vocalist. His contribution to the successful Hero musical brought him to new audiences while his scorching vocal on Sanctus Real's cover of U2's "Beautiful Day" from the 'In The Name Of Love: Artists United For Africa' album was, according to more than one critic, every bit as good as Bono's. Having landed a Dove nomination for Modern Rock Song Of The Year and being voted by CCM readers Favourite New Artist in the magazine's 2004 Readers Poll, the band's continuing CCM popularity seems assured. It's not a success they take for granted. Commented Hammitt, "It was completely unexpected and we're incredibly grateful. As a young band, we still need that assurance that we're reaching people and that they're catching on to what we're doing. This type of honour is such a great encouragement."