Sanctus Real: The Toledo, Ohio rockers talk about their 'We Need Each Other' CD 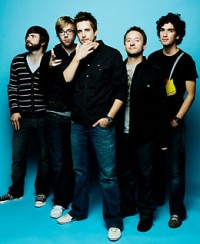 Down the years Sanctus Real have established themselves as one of CCM's most popular rock bands with a bevy of number one songs and Dove Awards. But their latest, 'We Need Each Other', is shaping up to be their most successful album to date. It is also their most positive. 2006's 'The Face Of Love' was an expression of the personal trials and pain being experienced by the band's singer and chief songwriter Matt Hammitt. But this time around things have changed. Said Hammitt, "When we made 'Face Of Love', we were going through some personal trials. Reaching the other side of that, we were feeling much more light-hearted going into this record. This time around, we [Hammitt, drummer Mark Graalman and guitarist Chris Rohman] also had a new bass player, Dan Gartley, and a fifth member who is a second guitar player, Pete Prevost. We felt like we were a complete band, having toured together for a couple of years as a unit."

Hammitt told journalist John DiBiase, "It was great because not only did we have Chris coming up with great [guitar] parts, but Pete's equally creative in a different way. And Dan as well. Dan's really creative in his bass lines. So we have two other creative guys coming to the table throughout the process, giving their input, writing new parts that we wouldn't have thought of ourselves. It was really awesome. It added to the texture of the whole record. So I think it was really beneficial to have those guys writing with us. We're excited to have Dan and Pete be a part of this thing. They're definitely solid members of the band and we're going to keep both of them - hopefully for a long time. They definitely added a sort of really unique, fresh element to the texture of the band."

'We Need Each Other' was produced by Chris Stevens, the same producer as on 'Face Of Love'. Commented Hammitt, "The cool thing about working with him is when we worked on the 'Face Of Love' together, he'd just moved to town and just started producing heavily in the Christian music scene. And so, in the same way that we've grown as writers and musicians over the last couple of years, he's grown a lot as a producer. So we were all ready to come together and do something beyond what we thought we'd do. We were pretty excited to work with him again."

The opening track on the album, "Turn On The Lights", is one of the most infectious rockers you are likely to hear this year. Said Matt, "We thought, 'This has GOT to be the opening track!' That actually was a song that we just started jamming one day in the studio. It's weird, because we were actually doing the last song on the record, 'Legacy', and we kinda started diverting from it. The whole vibe started changing. Basically that 'Turn On The Lights', what we'd done at the time, was burnt out of a side-jam of 'Legacy!' And it ended up, obviously, evolving and evolving into a very different song. We just kept going. But immediately, when Chris started playing that riff, we all knew this is gonna be cool. 'Cause we already had the chorus from what we'd been jamming, and then Chris just kinda came up with that thing and Pete kind of followed with the octave riff. Aw man, it just felt so energetic! It really lit up the room and all of us were feeling it. So we went in the studio and pretty much were done in terms of the music and the melodies, but we just kept tweaking the melodies. The big change that happened was the chorus, because we had the chorus where we thought it was really cool, but we were like, 'We gotta throw this thing over the top. We gotta just really do something weird or something different, catchy, punchy or something.' We didn't even know if we could put our finger on it, but we could feel it when we landed on it. And we just kept messing around and finally were like, 'Let's just try something really rhythmic' with the melody and the lyric and that's how we landed on the whole 'Send a shock through the power lines,' like all that stuff. And we saw the quirky elements of it and we were so excited in the studio 'cause it was so much fun coming up with a catchy, punchy kind of sound. It's almost reminiscent of kind of like an '80s pop thing or something. I don't know. It just felt really cool to us. So that's kind of how that song developed."

A theme which runs strongly through the entire album is that of the body of believers overcoming denominational differences and finding true unity. Hammitt commented on the issue. "My family endured a couple of tough church splits as a kid and it really affected me. As I grew older, I realised that some of the issues that split churches also kept denominations from working together. To me, it all seemed secondary to the importance of standing together [as Christians]. Since then, over the years, I have seen many denominations and Christian groups come together for various reasons. It is so satisfying to see us all together singing as one, just as it will be in Heaven. I think that brings great joy to the heart of God."

One of the important songs on 'We Need Each Other' is "Legacy". "We really need to promote forward thinking with our youth. When we make the decision early on in our lives that the only thing that matters is whether or not we have done the work of Christ, then he will make something great out of our lives no matter what we do for a living. It's something I think about a lot now that I have kids. I know that if my daughters see my love for Christ reflected in the choices I make, they will be far more likely to do the same."

One of the most powerful tracks on the project is "Lay Down My Guns". Matt explained the story behind the song. "There's this guy named Doug McKelvey who contributed some of the lyrics for 'I'm Not Alright' on the last record and he was really the first co-write we used with the band besides producers who had contributed stuff here and there. What he had basically done with that song, 'I'm Not Alright', is he came in and had done such a good job with helping us edit the lyrics and taking them to the next level. So we had been looking to get stuff from him ever since, if it works. So instead of just co-writing, he'd send us some random lyrics. We actually weren't going to use any outside writers on this record, and then Doug sent over kind of a b-file of extra lyrics and he had a worship song that had the line, 'Lay down your guns, lift up your hands.' I just liked that one line. We didn't use any of the other lyrics and I basically wrote a whole new concept on that one line, and then even changed that line a little bit. Because it immediately made me think of the war that's going on right now and what soldiers go through, and just thinking of these guys away from their families for so long. . . They basically live to defend themselves in our country. And how good does it feel when you can finally come home and set your guns down and be able to not be on your guard anymore. Just be able to have that release, y'know? And then it made me think of how that's life too. That, while we're on this earth, kind of like spiritually and emotionally, we have so many defences up all of the time that we have to have because we have an enemy. What would it feel like? How good would it feel to get to Heaven and lay down our guns and lift up our hands and learn to completely love again. It's really just a metaphor, using the war in Iraq as a metaphor for our spiritual journey. I like that song a lot."

One of the most unexpected guests on 'We Need Each Other' is Peter York, the president of Sparrow Records and an early pioneer of Jesus music. Matt explained how it came about. "We really had wanted Robert Randolph to play on the bridge [of 'Turn On The Lights']. Robert is with Red Light Management and at the time we were with Red Light, and we asked our manager about it and it didn't come through. We were sitting around the dinner table one night with Peter and we were like, 'Peter, we would just love for you to play sometime on our record,' 'cause he played with Phil Keaggy and 2nd Chapter Of Acts, and all these legendary, old school Christian bands. And he hasn't done a [recording] session in about 20 years. And we were like, 'You gotta come up here and mess around on the guitar and play on our record!' And he just said, 'I'd love to!' We were like, 'Seriously?!' He said, 'I'm serious, man. You tell me when and I'll be there.' Sure enough, our producer set up a time to have him come in and ripped a solo, man. First time in 20 years! President of Sparrow [Records]! It was great."

While 'The Face Of Love' was inspired by real life heartache and rediscovered joy, 'We Need Each Other' marks a completion of that healing process and a prophetic call for unity. The final words belong to Matt Hammitt, "There's a longing for something bigger than oneself, a band, a song or a crowd of concert goers. We need to come together as the body of Christ, unifing to see God's work done through us. There is so much simple truth in the statement 'we need each other'. We can accomplish so much more if we stand together."