Sara-T: An Italian singer telling the world This Is Who I Am

Tony Cummings investigates the music and calling of Italy's SARA-T

Of the nations of Europe, Italy has produced only a handful of Christian music artists. But that could be beginning to change, judging from the excellent debut album by Sara Taccardi, better known as Sara-T. Her album 'Questa Sono Io' is one of the best contemporary pop albums the Cross Rhythms team has heard for years and the news that the singer is about to release an English language version 'This Is Who I Am' will surely further the reputation of a singer whose classy style reflects elements of Whitney Houston and Celine Dion yet clones neither of them. Sara-T spoke on Cross Rhythms' Rimmerama programme about her life and music.

"Both my mother and father were Christians. They gave my little brother and me the right example and taught us about the love of God and what it is to be a Christian. I grew up knowing all these things, memorising Bible verses, et cetera. But when I was about 12 or 13 years old I realised that was not enough, so I had to choose and make my own decision to follow Christ."

Even as a child Sara showed a talent for singing. She recounted, "I used to sing in the kid's choir of the church, then I made an audition with the Continental Singers in Europe when I was 15. We toured in the north of Europe for a month. I remember that during the rehearsal the director would come in front of us with a mirror, showing us the face we were singing with. This was to make us realise how important it was to sing with joy and a big smile!"

In 1995 Sara joined the Gospel Sound, a vocal group made of four young talented Italians who wanted to spread the message of the Gospel through their music. Sara was an official member until 1999, when she left to take a different road that brought her, among others, to meet Christian singer and songwriter Albino Montisci. Said Sara, "The meeting with Albino was crucial and arrived in a special moment of my life, when I was discouraged and looking for answers." 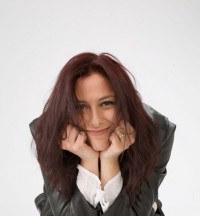 Sara admitted that in a predominantly Catholic country taking gospel musit to the public was far from easy. She said, "Italy is a difficult field: the situation is kind of tough for Christian music, especially Italian Christian music. It's not very easy to find places to play and to perform - especially if you want to do a concert with a full band, all the things you need. Mainly we are invited by churches, but they ask you to go either you alone with a playback track - that's not very nice - or maybe I just go with a piano player and guitar, and we try to do the best we can."

Sara-T found that she was in demand as a backing singer, performing on stage and on records behind numerous Italian pop singers. But she never lost her desire to sing of her faith. And to make a Christian album. She explained, "I was always doing backing vocals, but a few years ago I felt like God was calling me to do something on my own. I had to take my own responsibility, and so I don't know why he chose me, but I had to do it. I met Chris Eaton and we stayed there a few months, and we were writing songs and trying to put music together for the album."

The sessions for 'Questa Sono Il' actually took place in Britain with some of Britain's best Christian musicians including Dan Wheeler, Mark Edwards and Joe Clegg. The self-financed debut is a delight. One outstanding track is "Ti Diro" ("I'm Going To Tell You"). Said Sara, "I wrote it 10 years ago and it was very nice seeing it coming to life when we recorded it. It's about the day I'm going to be face to face with God. The chorus says, 'I'm going to tell you all the things I couldn't tell you when I was here on earth/All those things you already know/But then I will be able to speak out my heart'."

Sara is very pleased with how 'Questa Sono Io', which was mixed in Nashville, has turned out. "I'm pleased, yet sometimes I wonder why. Everybody was telling me when the album came out, 'So your dream came true'. But, honestly, I cannot say that my dream came true, because we had to invest money and time, many things. If I had to do an album only to show that I can sing and I can do music, I think I wouldn't have done it. So it's not my dream coming true. As it is written in the Bible, if God is not coming with me on the journey, I really don't need to start it. So it's a little dream, but it's a calling, and when God calls you to do something, you have to do it." 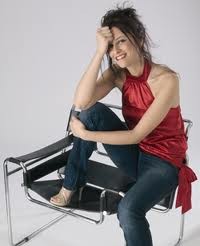 Now Sara is readying the English language version of her album. "At first I wanted to do something for my country, because if I was born in Italy there must be a reason for me being there! Italy needs to realise that God is there. But it's very difficult to find a way through the 'I'm a Catholic' mentality. I travel a lot in Switzerland with Albino Montisci, and Switzerland is more open to Christian music. I realised that the problem now is the language. So I have recorded English vocals in Switzerland and we are waiting to have the final master in our hands."

Here's hoping that the new version of the album will open new doors for this most gifted of singer/songwriters. But do not expect to see spectacular concerts with a lot of musicians and dancers on stage. Commented Sara, "My desire is to give a piece of me through this work, with a true, honest and vulnerable heart. People need to know that there is more to this life, something special, important and wonderful. They must know that there is Someone who loves them and this is Jesus Christ."