The "unknown" on this year's Alliance Festival bill is SARAH JAHN though in America there's already a huge buzz about the fine singer/songwriter with the haunting voice. Tony Cummings reports. 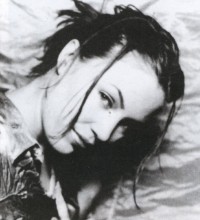 Seldom has a new singer emerged onto the scene for which there have been such big expectations. For almost two years America's CCM industry has been throwing around the name Sarah Jahn as almost a certain star-of-the-future. The reason for such unprecedented industry expectation is the fact that Sarah won the Gospel Music Association's Spotlight New Artist Contest. And as a previous winner were the sales phenomenon Jars Of Clay, and like Jars, Sarah is a product of Greenville College, Illinois, the fuss is somewhat understandable.

Now, at last, Sarah's debut album 'Sparkle' is finally out. Produced and engineered by the team of Glenn Rosenstein (U2, Ziggy Marley, Talking heads) and Susan Rogers (Prince, David Byrne) it is a creative tour-de-force, worth the long wait. Elegant melody lines distinguish songs like "Brand New Name" (written with Jars Of Clay member Charlie Lowell) and the gentle, folk-flavoured "Home" while tracks like the guitar-driven "Drinking Water" and "Love, Learn, Happy" have an effervescent upbeat sound. Throughout, Sarah's heart stopping voice weaves emotively over state-of-the-art production, to create one of the best singer/songwriter albums heard for years.

Cross Rhythms began by asking Sarah if the long wait to get 'Sparkle' in the shops was worth it. "The process has taken longer than I anticipated," admitted Sarah, "but I think that it's taken its time for a reason - God has everything under control and it's happening the way he wants it to happen. I tried not to be too antsy about it."

So how did the songs on 'Sparkle' come about? "The songs are about personal experiences and how God was working in my life during those experiences," explained Sarah. "The title of the album is 'Sparkle' and the definition of sparkle is to emit or reflect small flashes of light. As a Christian that is something that should be happening, we should sparkle and the delight of God should shine through us and that should be evident to people from the inside out."

Sarah didn't intend to make a career in music. She admitted, "I hadn't planned on doing this. It took a few years to accept that this was my calling, and then to act on it." Her story began in her native Midwest, the shy daughter of a minister growing up in a musical household. While in high school, Sarah piled on the math and science courses, looking forward to some sort of science career. Yet, around the same time, she began to recognise the will of God moving her towards music.

"It made no sense," Sarah said of that time. "I had a lot of questions to work out, but one by one God answered them." In the middle of her undergraduate work at Greenville College in Illinois, Sarah began studying music theory and voice, and slowly bent herself in the direction she felt God leading her. Then, everything started coming together.

At the 1995 Gospel Music Week Spotlight Competition, Sarah caught the attention of a group of music professionals and went on to win the highly touted contest. A short time later, she was given the opportunity to tour Japan as a promising young Christian artist. Back home, she recorded an independent CD (which included five songs re-recorded for 'Sparkle'). Sarah submitted 'Crucible' to 105.7

The Point, a major progressive FM St Louis radio station which annually releases 'The Point Essentials', a CD of the best songs by unsigned local artists. "Crucible" was included and earned not only extensive radio airplay but also a rave review in the St Louis Post-Dispatch.

It was only a matter of time before Sarah signed with a record company. "I chose Warner Alliance because it's part of the Warner Records family," Sarah explained. "I don't just want to preach to the choir. I need to reach out, and I think I'll have that opportunity with this kind of partnership." As she implied, finding as wide an audience as possible is Sarah's paramount goal, but not for the usual reasons. "I don't want people to think of ME as the big deal," she said. "Jesus Christ is the big deal."

Sarah continued, "Since I didn't plan on going into music as it was direction and leading from God to go into music and since I didn't feel I had the necessary talent, I was able to see that it wasn't anything I did to achieve that but that it all came from God."

Now that 'Sparkle' is out there and she's touring constantly, including her UK debut at the Alliance Festival, was she a little nervous? "Yes. I'm a little nervous because anytime you create something or write something, any time that that is shown to the public you make yourself vulnerable and open yourself up to criticism and opinions of everyone. So I am a little bit nervous about that. I really shouldn't be worrying about that though."

Some of the songs on 'Sparkle' deal with human frailty, not a subject normally associated with CCM. "A lot of people can't admit that they're powerless," commented Sarah. "As humans we don't have the power to heal ourselves, to fix ourselves and to save ourselves and a lot of people can't admit that. It is necessary to admit that before we can accept God's love and before we can really have the realisation of who we are in Christ."

The moving song "Chronic" was written about her mother. "She has had chronic fatigue syndrome for six years and tried a lot of treatments and cures and hasn't been healed from that yet and everyday she tries something new and still has it. The parallels are sinful human nature that we are born into. We can't help it, we're human. Because of the fall that's the way it is."

What was her mother's response when Sarah played the song to her? "It was kind of a surprise for her. She didn't know that the song was being written or anything about it until after it was recorded and then I presented it to her. It was a really special time. She cried."

Another intriguing song on the album is "Drinking Water". "If you think of drinking a glass of water, it's a really simple act - if you do something simple like drinking a glass of water, or take a breath, a sigh, just kind of give up your worry and even though a lot of things are going on in your life, basically God asks us not to worry about our futures. The lyrics go, 'I am drinking water from a glass and I am waiting patiently/Spilling every worry from my mind and giving up my insecurity.' God asks of us to rest in him and in his peace and not to worry."