Sareem Poems: The veteran rapper with the "Work For It" radio hit 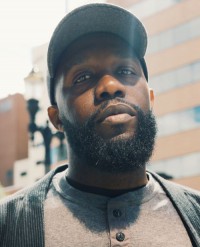 The rapper from Lansing, Michigan, Sareem Poems, currently has the song "Work For It" on the Cross Rhythms playlist. That collaboration with producer Ess Be will no doubt soon be followed by his latest Illect Recordings release, "Kick'n It", produced by Newselph. Wrote journalist Christopher Mitchell about the track, "The song is an addictively simple assemblage of chunky funk and the yes y'all sensibilities of the back in the days. Sareem crushes the groove with a nimble four finger ring flow referencing Kane, Suede Pumas and dookie gold chains. In his typical fashion, he manages to fit several gems into the snuggest spots in his stanzas, most notably in the second verse where he pays homage to the Creator who he is tuned in with at all times."

Sareem Poems has the "government name" of Solo. It was as Sharlok Poems that he first came to Joe Public's attention as a member of the critically acclaimed collective, LA Symphony. As well as Sharlok, the group consisted of CookBook, Flynn Adam, UNO Mas, Joey The Jerk, Pigeon John, bTwice and J-Beits (Great Jason). This astonishing hip-hop collective were widely tipped to become Christendom's breakthrough act and their 'Call It What You Want' album, recorded between 1999 and 2001 for Steve Taylor's Squint Entertainment, is now considered a classic amongst the hip-hop cognoscenti. Unfortunately, Squint Entertainment went belly-up, the album only got limited edition release and, although LA Symphony released excellent albums for Gotee Records ('The End Is Now' in 2003 and 'Less Than Zero' in 2005), they were never able to quite get the cutting edge that they enjoyed on 'Call It What You Want'.

With LA Symphony on an extended sabbatical, Sharlok Poems spent the early '00s putting together demos for a solo album, 'Left'. He said to journalist Imran Khan, "My goal was to put more of what I listened to into the music." The Sharlok Poems album 'The Movement' followed in 2004. Examining topics such as absentee fathers and the routine doldrums of 20-something life, it was an intriguing release. By 2007, he was ready to release the bass-entrenched grooves and poetic declarations which made 'Blooming Sounds' something of a standout. He explained, "I worked with the now-defunct label Hip Hop Is Music, which was owned and run by Braille of Light Headed. [Braille's] approach was for me to pick beats that appealed to me, without knowing who produced the track. So I ended up working with a lot of great producers that I have never met."

In 2009, Sharlok became Sareem and released 'Black And Read All Over', which Imran Khan described as "an album of choppy, sci-fi hip-hop funk, full of backward loops, zinging bells and jalopy rhythms that came courtesy of some of hip-hop's more off-the-wall producers. It's the album that expanded Sareem's music beyond the insular circle of listeners who had been following him since his debut." Produced by Oddisee and Theory Hazit, 'Black And Read All Over' was an eclectic set. He said at the time, "I owe the scattered influences to my taste in music. I listen to everything except country and death metal. Theory Hazit had to deal with my ear candy ideas, phone calls and emails about adding weird sounds here and there."

By 2014, Sareem had joined up with the hugely gifted producer Ess Be. They met at All Of The Above Hip-Hop Academy, an extracurricular programme in Lansing, Michigan for youth interested in hip-hop. It was founded by Ozay Moore and tried to give kids principles on how to lead and be impactful in your neighbourhood and at the same time teach them the history of hip-hop. Said Sareem, "Ess Be was one of the beat-making instructors. At that point I was considering not making music anymore and we got to talking and he said he was gonna stop making music."

In 2015, Sareem and Ess Be collaborated on the project 'Beautiful Noise'. Said the Cross Rhythms reviewer, "With remixes and instrumentals dominating the release, this is an eight-track mini-album that is solid, soulful and deep without ever truly being spectacular."

The next release by Sareem Poems & Ess Be was pretty spectacular. Lins Honeyman wrote, "Setting the scene for an album full of lyrical purpose, the autobiographical opener 'Simply Truthfully' sees Poems embrace the person God has created him to be whilst 'What's Wrong' finds the rapper seeking forgiveness. Elsewhere, deep issues such as injustice and prejudice are covered in the likes of the synth-laden 'Dance For The Dead' and the boom bap expose 'The Way It Goes' before the spoken word 'I See You' has a neat twist halfway through that portrays Poems' lyrical genius."

Now, with his "Work For It" being heard on Cross Rhythms radio and his "Kick'n It" release bringing the spectacular production talents of Newselph (heard last year on his own "Two Face" single) to bring new gusto to Sareem's rich baritone flows, things are definitely on the up for the emcee. In 2015, Sareem spoke to journalist Gus Navarro but his words are still completely relevant about his life and attitude today. "You can't let the future be the driving force because it ain't here yet. If you're chasin' the future, and you don't fully know what the future is going to be, you're just going to keep chasing random things. A lot of my songs are about moving forward and climbing to a higher state of being. Whatever that is for you. A lot of people in society are obsessed with material things. The main thing for me is about being rich with time. I had to redefine what wealth was for me. You can have all the money in the world, but if I'm able to live and not worry then I don't need millions. That's a goal for me and you'll hear that in the music."