Scott Blackwell: Minister of the decks 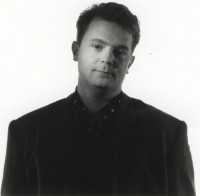 As all devotees of sanctified dance will tell you, the founding father of the whole movement is American deejay, producer, remixer and record exec Scott Blackwell. Scott's classic 'Walk On The Wild Side' album is generally acknowledged as the release that turned the fantasy of Christians making club music into undeniable reality, and since Scott's formation of N-Soul Records in California in 1993, he has been responsible either as a producer or executive producer of dozens of dance-worthy albums from the likes of Nitro Praise, the Rhythms Saints, the Raving Loonatics and AJ Mora as well as being an occasional remixer for CCM luminaries like dc Talk and Christafari. Now Christian dance buffs have two new pieces of info to chew on. One is that Scott is to make a welcome return visit to play at the Cross Rhythms Festival (he made his first UK visit there in 1994). The second is the rather unexpected news that Scott has left N-Soul Records. I began by asking the veteran mix-master why he'd left the company he'd founded.

"N-Soul was a sole proprietorship run by myself and my wife for the first four years. Then in October 1997.1 saw the need to bring some help into the label so I incorporated the company and brought in a partner and assigned him in the position of president and gave him the authority to run the company. Unfortunately, we just aren't tracking together and the direction the company is going I'm uncomfortable with. So I just felt it necessary to resign my salaried position with the company and move on and do what I feel God wants me to do."

As any Cross Rhythms radio deejay will tell you, there's a great demand for Scott's early albums, particularly the stone classic "My King" from the 'Walk On The Wild Side' set where an unforgettable sermon by Doctor S M Lockridge is put to a dance beat. So the news that a Blackwell 'Best Of album has emerged is particularly welcome. Explained Scott, "All of the Frontline catalogue which was the company that owned MYX Records, which was the company that I put all 'those records out on, was purchased by KMG and they are aggressively marketing the back catalogue so they're putting out compilations and greatest hits of a lot of the older Frontline material. KMG called me and I put a list together, I selected the songs and did the artwork and boom! There are tracks from 'Walk On The Wild Side', 'Once Upon A Time' and The Real Thing', 'A MYXed Trip To A Gospel House 1 and 2' and a Jon Gibson remix which was on a greatest hit record of his."

In view of the fact that dance music is notoriously inclined to date, I wondered whether Scott enjoyed listening again to his old output. "Yes, I did. It took me back to why I'm doing what I do, and at a real time when I needed to know that. Actually, one of the tracks had me in tears, 'Surrender' from 'Once Upon A Time'. It was written by Hans Ives who worked with me during the first four years of the label and now is a worship leader at a church in Riverside. Just listening to the lyrics it really struck me and ministered to me."

With Scott free from the headache that had become N-Soul, he is embarking upon new musical projects with real enthusiasm. "The first two things I'm working on are productions for Pamplin. One of them is tying up an Echoing Green record with Joey Belville and we're going to do a kind of big beat sound with that - I'm producing that. The other one is JR Barbie from the Prodigal Sons and his fiancÃ©e Danielle are doing a project, a kind of Faithless sound. We're really excited about that. They are getting married in a couple of months and God's called them to minister together so we are trying to develop a sound that will work for them as a platform to minister together."
I asked this extraordinary dance music visionary whether a new Scott Blackwell label is in the offing. "Yes, but much differently than I've done before. I learned a lot in the first four and a half years running N-Soul by myself, producing the records and trying to do the books. I don't have a business background at college so I basically had my baptism by fire into the business world. I'd always been an independent contractor as a deejay or producer so I have in the works right now two new imprints. One is dance, one an urban imprint to be distributed through Diamante. Then we are talking to a major label about distributing to the general market."

A few years ago N-Soul put out an album 'Cross Rhythms' with the subtitle 'Britain's Sanctified Dance Underground'. I asked, Scott whether he was aware of the new wave of UK Christian dance artists like the DNA Algorithm, 1 Lite and Psalmistry? "Yes I am," chuckled Scott. "In fact, one of the songs on Psalmistry's 'Armchair Rebellion' album was one of the things that happened when I went to Redland Studios when I was over in the UK last February. 'Something About Your Love' is actually based on a sample vocal which I brought over there for us to work on. Tony Silcock did a great job knocking that track out. I'm just very much inspired by the underground dance community over there, the producers and deejays and people who are in ministry because it's just so real, there is a depth to it that you just don't find in the States. As far as I'm concerned the best dance music comes from the UK. There is no doubt about it. I've fought saying that for years, but I'll say it now: You guys rock!'"

My final question was what did Scott think of the Cross Rhythms Festival? "I was there in '94 with Sandra Stephens and that was just a great experience. We had a great time and the set we did went so well. It was nice to take an opportunity to speak at one of the panels and also get ministered to. The guys at N-Daze really spoke into my life. I'm really, really looking forward to playing there again."