Lins Honeyman catches up with Prestwick-based singer, songwriter and performer SCOTT NICOL hot on the heels of a successful American tour 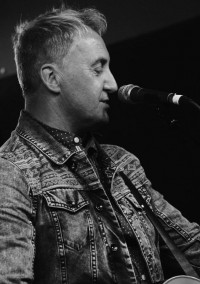 Few could argue with the claim that Prestwick-based singer/songwriter Scott Nicol is one of the most experienced and hard-working artists in today's Scottish music scene. Since Cross Rhythms last caught up with the songsmith back in 2001, the Ayrshire man has gone on to carve out a niche for himself as one of the country's most visible live performers with a seemingly continual stream of gigs in venues ranging from churches and coffee houses to bars and private parties as well as plying his trade at open mic nights, songwriter competitions and more or less anywhere else that will give him the opportunity to present his own unique brand of unforgettable showmanship and quality songwriting.

As well as his live appearances, Scott has built on previous albums with grassroots Scots band Maybe I'm Dreaming and early solo work at the turn of the century with a healthy flow of releases over the past few years that have seen him develop his penchant for turning out gritty Springsteen-like songs of hopeful realism - aided by an equally gritty and Springsteen-like vocal delivery - that subtly reference his underpinning Christian faith. Since the 2009 EP 'Possibility Screams' (which employed the services of top Scottish music couple David and Yvonne Lyon), the one-man-and-his-guitar album 'Luminous' and full band outings 'Storm The Winter Palace' and 'The Burning Days' have seen the light of day whilst earlier this year saw the release of Scott's latest album 'High Velocity' along with two accompanying videos.

In addition, Scott has recently set up a music teaching business as well as being in the unusual position of having a backing band in both Scotland and the US - The Limitless Sky and The Luminous Storm respectively. I catch up with Scott on a rare night off having just returned from his American tour and I begin by asking how 'High Velocity' - his new release - has been received so far.

"The reaction to the new album has been great," Scott advises. "People have been very positive and they seem to love the videos that we've put out of the songs 'Silent Youth' and 'Velodrome'. We've just had our launch night for the 'High Velocity' album at a venue called the Beanscene in Ayr and it was one of the best nights I have ever been involved in. It was standing room only and it couldn't have gone any better."

Anyone who has experienced a live Scott Nicol performance will know that he is a showman at heart with an inescapable stage presence. Depending on the venue, Scott can often be found standing on the nearest table or leading a sing-a-long in amongst the audience whilst his Limitless Sky colleagues look on with affectionate amusement. "When I go into any place that I play, as part of my preparation I look to see what things I can clamber on," jokes Scott before explaining what makes him tick. "For years and years, I've had this approach to life that I never want to be boring. I always have a feeling that, if I'm playing a gig or leading worship or involved in something, whatever else happens people can at least say it wasn't boring when Scott was up there. That's what's in my spirit and it's never really left me. It's the same with songwriting - I'm always working on something. I like the idea that I'm always pushing forward.

"I'm under no illusions, I know I'm not a trained singer," he continues. "I can sing and I've got a good voice and I give the Lord the glory for that but my strength is connecting with people when I'm on stage. It's been said to me on more than one occasion that I'm a better live performer than I am a recording artist and I know that. You should, at my age, understand that and play to your strengths."

One of Scott's additional strengths is leading worship at his local church but I suggest that most of the material in his back catalogue could hardly be called praise music. "Actually, worship is at the heart of everything I do and part of my everyday life on this earth is spending time worshipping God," he clarifies. "You're right, 'High Velocity' is certainly not a worship album nor is it intended to be but I have written a lot of worship material over the years. I'm the main worship leader in my home church and I run the praise band but, when I go out and play in non-church venues, I don't necessarily see it as my job to convert people although it's obviously great if that happens. My songs are full of kingdom values though and I'm not going to sing or write about anything that would dishonour the Lord. Also, I'm not really a negative writer - although I address the real life issues that everyone faces - and I'm always going for the hopefulness that the person of Jesus embodies. I want to be a part of the music industry and influence it for good."

Keen to be a good influence on the music industry from the ground up, Scott has recently set up a small business called Possibility Screams which involves the experienced singer/songwriter giving lessons on writing, playing guitar and stage performance. "Nurturing people is important to me," Scott explains. "When I was younger, I had no one really saying, 'Scott, you're really good' or 'you could do something with this' in terms of my music. No one was really speaking that kind of positivity into my life and now I can see that, if that had happened, my life would have been different. I was a bit of a late bloomer when it comes to making music and I don't want that to happen to young people who I can see are talented. I have mentored many young musicians over the years and I see it as an important part of what I do. I have a responsibility to be part of something that's training up the next generation."

With a performance schedule that could floor an artist half his age, it seems that Scott thrives on taking his music to new places with distance being no barrier. "I'm just back from my US tour," he advises. "I went to play in America for the first time in 2003 and I went back to play in New York, Nashville and Wisconsin in 2011. On one of those nights in Wisconsin, I met a bass player and he said he would put a band together for me if I was ever to come back. My most recent visit was the fifth time I'd played over there and that band - Luminous Storm - has played with me four times. We never do the same song the same way twice and it keeps everybody - including me - on their toes!

"Americans just love Scottish people and that's a bonus," continues Scott. "There's warmth shown to you because they either want to be Scottish or they say they're two thirds Scottish! I keep going back to Wisconsin because I've built up a bit of a following there and, at my age, I'm best going to the places where I know people will come along to listen."

I ask Scott what his ultimate aim is in relation to his role as a singer, songwriter and recording artist. "I want to be full time in music - it's my goal, it's my prayer," he confesses. "It's the direction my life is heading in and it actually feels like I'm getting closer to it. People at my age can make a living out of music. I've got songs with American publishing companies right now who are actively involved in trying to get other artists to sing my songs. I'll follow the opportunities that come my way to make being full time in music a reality. I want to feel like I'm always moving forward."

Before we finish up, I ask what advice Scott has for those starting out on their musical journey. "If I see young kids who are good and have a passion for what they do, I really encourage them to go for it now," he affirms. "Don't wait too long because we're in an age where youth has power. Things are going great for me now but I regret not being more passionate about this thing 15 years ago."

Scott adds in closing, "If you're young and you're writing songs or wanting to perform, spend some time with other older and more experienced songwriters because, although you may be good, age brings experience and you can learn a lot from them." And few could deny that an ideal place for any budding artist to start would be spending some time with Scott Nicol.