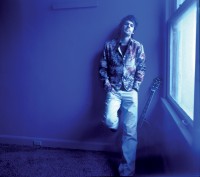 The last time Cross Rhythms reported on the hugely talented Texas-born, Nashville-based singer/songwriter Shaun Groves his 'Twilight' album was out and getting rave reviews. Now Fierce! Distribution have released 31 year old Shaun's newest Rocketown album 'White Flag' and already critics are suggesting it is the songsmith's strongest so far. I began by asking Shaun why he called his CD 'White Flag'. "Well, 'White Flag' is a metaphor and it's surrender which is at the centre of the Christian life. Until we come to an absolute end of ourselves and abandon ourselves to God's will, we are simply deluding ourselves." Inspiration for his album came from IKON, a college and young adult Bible study he began co-teaching last spring at his home church in Franklin, Tennessee. "When I started working towards a new CD, I went months writing songs that felt true but trite," Shaun recalled. "They were good but not great. I couldn't produce a single profound lyric or moving melody for almost a year. Then I began teaching at IKON along with my best friend/brother-in-law/road manager Brian Seay, and the studying, speaking and conversations made me think in ways I hadn't before."

IKON began in 2004 with a verse-by-verse study of Acts and the first church because Shaun and Brian quickly discovered that their 18-25 year old audience was disenfranchised with organised religion. From there, the group delved into Ecclesiastes and by the autumn the Bible study turned its attention to the Sermon On The Mount, beginning in Matthew 5. "I became obsessed with the Beatitudes, so simple and so profound, so counterintuitive," Shaun recalled of teaching the first 12 verses in the chapter. "I became fascinated with the simplicity and relevance of their message. Jesus outlines the progression of a heart from depraved to committed to Christ, from being a believer to being a disciple. I understood what had hindered that progression in my life so far. The beatitudes triggered a change in me. They are the closest thing to a formula for following Jesus that I've ever discovered in the Bible. They are an excellent gauge for me of where I am in my relationship with Christ and they remind me of what really matters: my heart."

The album's title cut offers a deeper look into "Blessed are the meek for they will inherit the earth": "Meek isn't a word we use very often," Groves explained. "When using 'meek', Jesus is referring back to Psalm 37 where it says that the meek will inherit the land. The people aren't angry, they're not uptight or worried because they know God is in control of them. They've committed their way to God; they're surrendered to God. A white flag is a metaphor for surrender. A surrendered heart transforms the way we see each other and life. Surrender goes beyond agreement or belief alone - it means giving up any notion of competence without God. Churches are filled with believers. The mission field, the food shelters, the AIDS clinics and the history of martyrdom are filled with surrendered disciples of Christ. This CD is about being a surrendering follower of Jesus and not just a believer in him. How do we get from belief to discipleship? What does that path look like? It begins with giving up."

The harder-rocking "Crave" on 'White Flag' takes the next step on the journey. "The song 'Crave' comes out of 'Blessed are those who hunger and thirst for righteousness.' Before we surrender to Christ, before we become meek, we don't have this hunger and we don't desire the things of God. Now that the Spirit is in us, we're moved to be righteous. And so, the American dream, the house in the suburbs, the SUV in the garage, those things are just not going to fill us up. 'Crave' is a defiant song, it's an anthem. For me, it's about getting in the face of the billboards and the magazines and the commercials and all the temptations and treasures of this world and shaking a fist and saying, 'You cannot give me what I really crave!'"

Another telling song on 'White Flag' is "Bless The Lord". Intriguingly, it wasn't written by Groves. "After the 9/11 attack like thousands of others I was full of feelings like anger, sadness and despair. I was on a tour bus somewhere in Texas just trying to get a grip on my feelings. Then I heard 'Bless The Lord' and its lyrics just blew me away. I wish I'd been mature enough to write that lyric."

I was speaking to Shaun a matter of days after another disaster - the flood in New Orleans - rocked the USA. I asked Shaun what he felt our response to such a disaster should be. "Our first response should be to pray. In fact, a reflection on such disasters is in my song 'Heaven Hang On' on 'White Flag'. But the Christian response shouldn't stop at prayer. We Christians are Christ's hands and feet here on earth. We should be seeking ways to mobilise the Church and respond to the calamity and suffering that has enveloped people."