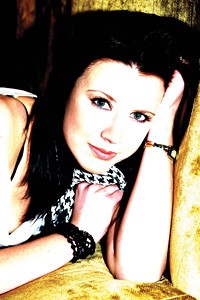 Little did we know when Cross Rhythms interviewed teen pop evangelists tbc, in the summer of 2005, that one of their members, Warrington-born Shell Perris, would soon be established as a seminar speaker and author. Not that Shell has left music behind. The release of her 'Made To Be Me' five-song EP shows the emergence of an impressive singer/songwriter talent. I caught up with Shell when she visited the Cross Rhythms studios and began by asking her how she'd got into writing books.

Shell replied, "My first book was In These Shoes which came out in April 2005. I remember that because it was just after I got married. That was a book aimed at teenage girls, all about everything that a girl needs to know really. I became a Christian through having an eating disorder and reached a place where I thought I wasn't going to live. I just didn't know how I was going to live. I was told I had eight weeks left to live due to my anorexia and God just came into my life in such an amazing way and totally transformed it. Within two years he'd totally healed me and brought me to where I wanted to now help girls who are in similar situations, who struggle with self-esteem and who struggle with knowing that they're loved for who they are. I use my experiences to help them."

It was while the 18 year old singer was a member the Merseyside Collective (one of the regional groups formed by Innervation to undertake schools evangelism in a specific locale) that Shell felt God telling her to write a book. "I got in from this Mission week, sat on my bed and God just broke my heart. I sat there just crying about these girls who were at the school where we'd had the mission. I cried, 'God, what can I do about it?' And clear as day he just said, 'Write a book.' I was like, 'I'm 18, I can't write a book.' And God said again, 'Just write a book.' So for three months all I did was sit at my computer when I was in my room at night, writing down all the things that God was putting on my heart. By the end of three months I had this book. I sent it off to Scripture Union and they said they wanted to publish it. And then God said, 'Write another one!' So I wrote another one that was aimed more at pre-teen girls."

Shell's next effort, Something To Shout About, was a book in the style of a magazine. Explained Shell, "It has articles about self-esteem and the A to Z of being a Christian, all kinds of different things. It was part autobiography as well so there were loads of pictures of me growing up and some of my fashion disasters, all that kind of stuff. It's just been amazing the response that I've had through that. Now I have another book coming out this October called Something To Shout About Journal and it's split into 52 sections, one for every week of the year. Each section is based on a particular topic - it might be acceptance or forgiveness or who made the world or ask challenging questions like what about other religions. We go into some quite meaty stuff. It's made up of a Bible bit, Michelle's bit and then four pages of journal paper for the girls to write down their own thoughts or feelings, questions and prayers."

After the Collective, Shell joined musical evangelists tbc with Laura Moseley from Dartford, Natalie Trueman from Horsham and Liz Roberts from Swansea. The group played a huge amount of concerts and missions as well as recording the delightful teen pop album 'tbc' produced by Zarc Porter. So why did Shell leave? "I'd been in it for three years and a lot of people forget that I was in it for eight months on my own before the official line up was launched. So I'd kind of just come to the end of my contract and God was stirring my heart. Tbc was great and I absolutely loved being in the group but I think God had just moved my heart on a bit more. Tbc are very teen poppy aren't they? You know, pop princesses and all that kind of thing which I loved for the time that I was part of it but I felt like I really wanted to get into something a bit meatier musically."

Presumably she hasn't missed all the dance routines? She laughed, "I really do miss them, actually. I'm still in touch with the new line up, of course. I've been doing some vocal coaching. It's nice that we've still got that relationship."

I asked Shell how her public speaking developed. She explained, "It was when tbc did their very first tour, which was in March 2005. We did a dress rehearsal in this church. I asked the question, 'Is somebody going to preach?' Because of everything that had been going on we'd just totally overlooked this. Phone calls were made and it turned out that one of us had to do it. And it was just like, 'Oh Shell, can you do a preach?' And I was like, 'Oh, put me on the spot!' So I went home and prepared this talk that I believed God had laid on my heart and that was the beginning of it all really. Every time we did a gig I always did a preach at the end. We saw God do amazing things through the music and the speaking. I think it was the beginning of a kind of speaking, preaching season that God took me into."

Today Shell is working part time for Warrington Youth For Christ. "I'm mentoring about 20 girls a week, visiting high schools in Warrington and it's just been amazing. I've been doing that one-on-one evangelism stuff for these girls in schools. Seeing some of the situations that they're in, you know, the life issues that they are having to face, it really upsets me but then I get so excited that I can be a Christian going into that situation and just sharing the Gospel with them and seeing their lives slowly turn around."

When Shell left tbc she wasn't certain that she would ever sing in public again. "When I left tbc I had to know that if that was it, if that was all the singing that I ever did, then that would be ok. And I thought: 'Right, if this is it, God, then that's fine.' Then I went to a church weekend called Revive and I was stood at the front during ministry time. Somebody had been preaching about God's love - all the stuff that I preach to other people. This guy had been preaching at me and it really affected me and I went to the front for this ministry time. I just closed my eyes and God gave me this picture of people sat around a massive table at Christmas time and we were all pulling crackers. Out of a cracker came a paper hat and I unrolled this paper hat to put it on my head but it didn't quite fit properly and it was ripping a bit because it was made out of paper. Didn't look amazing. Then this other picture was the same situation but I was wearing a golden crown and I was like, 'God, what the flippin 'eck does that mean?' And God just said to me, 'Tbc is the paper hat thing - it's great for what it is but it's time to leave that to one side now because I've got this one that's more suited to you, better for you.' And I was like, 'Oh, my goodness!' Tbc was a great foundation for my ministry now. I remember it was 12th September last year when I went to Dave Bruce at Authentic and asked, 'Can I do a solo CD?' He said yes straight away and they ended up giving me a three album contract and it was just amazing."

The producers that Authentic put Shell with are tried and tested mainstream music men. Simon Hill and Rob May have worked with such acts as Natasha Bedingfield, Westlife, Louise and Emma Bunton. How did Shell connect up with such big-timers? "Dave Withers who is the MD of Authentic goes to the same church as Simon and Rob. He asked if they would work with me. It just went from there really. We established a great relationship, we work really well together and that's what it boils down to. They're amazing people. It was just great to work with people who believe the same things as you do but who've got such a creative buzz about them. When the three of us sat in the studio it was just like Creative City. It was amazing how we just spurred each other on and came up with some good ideas."

Shell described her sound as something of a "thoughtful singer/songwriter with a bit of a rock chick thing." Her favourite track on the 'Made To Be Me' EP is the title song. Said Shell, "It's been really weird you know because this is the first time that I've had my own songs out there on a CD. I've kind of opened my heart up to all these people that have listened to my songs, and gone 'This is me.' 'Made To Be Me' is my favourite song because it reflects my own experience. Like I said before, I struggled with an eating disorder and it's a song about being happy with how God's created you to be and not feel that you have to compare yourself to other people. So it's really close to my heart. Obviously all these girls that I work with know that it's also something that they struggle with. In fact I don't think I've ever met a girl who hasn't at some point struggled with feeling rubbish about themselves or having low self-esteem. People who have heard my songs already have been touched by them. It's been such a privilege."

Reading your story has really inspired me. Thanks! And also thanks to God for bringing the article to me. I'm just embarking on a similar venture, and this has given me heart. Music touches us all. Here's to spreading the word!

it is so fab and it is so cool.

your such a good singer!!! You taught me once music 7 songs with the rest of my class Y5 and the rest of our school Lowton St. Marys remember

Shell rocks! Go for it girl...