Making the long trek down to Devon from Scotland for Cross Rhythms '94 are the increasingly popular roots band SHELTER. They spoke to Susan Lumsden. 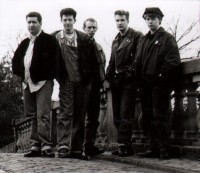 At midnight on Friday, 8th July the Cross Rhythms festival's 5,000 capacity tent will be transformed into a ceilidh/folk club. There to satisfy Christendom's new taste in roots music will be Eve And The Garden, Mike Stanley's Shenanigans and one of the brightest new bands to emerge onto Britain's Christian music scene, Shelter. The Paisley-based band played together for the first time in 1993, formed from the ashes of the Donkey Spoke. In a short time, they came to rank with bands like December and Hallelujah Square among Scotland's up-and-coming exports in contemporary Christian music. Just months after their first gig, Shelter were selected to support The Electrics at Glasgow's King Tut's.

Reminiscent in style of Capercaillie or Eden Burning, Shelter insist they did not come down in the last shower of Celtic trend-setting which seemed to flood the market. They claim authentic Scottish influences from as far apart as Lewis, where bassist Pepe MacDonald grew up, and the Orkney Islands, which gave the band Andy Chittick (drums) and Kris McEwan (lead guitar, electric fiddle, mandolin and banjo).

From diverse backgrounds, the band have produced an eclectic style, which ranges from thoughtful ballads to foot-stomping jigs. There are plenty of sound surprises: as well as Kris's impressive range of instruments, woodwind musician Kenny McNicoll can turn his hand to everything from the saxophone to the bagpipes. They believe a distinctive Shelter sound is "evolving" as they play together. "Except 'evolution' is a bad word," quips someone, to general laughter.

Shelter shows contempt for Scottish music "about hills and valleys which leaves you all misty-eyed. It's as if Scotland is not a real country at all," says one band member. Shelter's aim is to reflect their own experience, which includes their native land, both urban and rural. "So if there's a river in it, it's probably by us!" says lead vocalist and guitarist Peter Semple.

All five members of the band contribute to song writing, although Peter has been going through a particularly productive phase recently: "Songs just seem to be coming out of his ears," smiles Andy. The band reckon it takes them three weeks of work on a song from its initial jam session until they play it on stage. "And another three months until we play it right!" adds Kris, laughing.

The energy of Shelter live is undisputed, particularly in their reels and jigs. "It's feel-good music," says Peter. "All kinds of people enjoy it, they may be heavy metal, soul or blues fans." But this feel-good sound is essentially live; no degree of precision in the studio will recapture its atmosphere. Shelter realise that other qualities, such as lyrical depth, are necessary in recording.

Here the watchword is honesty, not "washing over problems, as Christians tend to do". They hope that individual listeners will catch something from their lyrics, as has been their own experience with the music of others. Singing a sad song often feels like "admitting a failing", but Kris insists, "we need to be real". The image some Christian bands put across is such that, Peter says, "you think you have to be perfect before coming into God's presence; we don't want to do that, that's living a lie."

Shelter are keen to maintain a 'cross-over' approach to their concerts, playing both Christian and secular venues. Musical quality, they feel, will open doors to a wider market, and further opportunities to share their message. This is a top priority "whether we play in a grotty wee pub," says Kris, "or at Wembley...well that would be excellent..."
Shelter go on this Summer to play Crossfire at Aintree and of course Cross Rhythms. Challenging times are ahead as a replacement must be found for Kris, who is due to join the Electrics after Cross Rhythms. This has postponed the band's second visit to the recording studio. Shelter persevere with a goal in mind: as Pepe MacDonald says, "We want to be servants. At the end of it all God will not say, 'Well done good and faithful bass-player', will he?"

For more on Shelter visit the Shelter artist profile