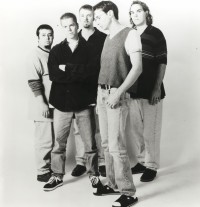 Anyone who's heard the serious hot cut "Everything I Hate" on the 'Smalltown Poets' album will know that here is a band with an engaging modern rock sound and an ear-catching way with lyrics. Consisting of Michael Johnston (vocals, rhythm guitar), Danny Stephens (keyboards), Kevin Breuner (guitar), Miguel DeJesus (bass) and Byron Goggin (drums), these particular poets deliver pop rock with hooks in abundance. Their radio hit is about the dilemma of sin we all face. Observed Michael, "We're born with the inexplicable desire to do what is wrong. The apostle Paul explains this in Romans 7:15-25 of the Holy Bible. Acknowledging our sins is the first step to a relationship with Christ."

For this Atlanta-based band, it's that relationship which is pivotal in the Smalltown Poets' ministry. The genesis of the band was a creative writing class at Atlanta's Tifton High School. Through that Michael Johnston and Danny Stephens became friends. "We were kind of thrown together on an artistic and musical performance level at the same time. And we were both Christians who wanted to share our faith and shared a love for music," said Michael. Both were influenced to profess their faith at early ages. And both knew music would be a lifelong craft.

"It's really as simple as that," added Danny. "I just knew, probably from the time I was 12 or 13, that music is what God wanted me to do. And he's just led this group of men to be the team, Smalltown Poets, to fulfil that calling."

During those influential high school years, fellow student and preacher's kid Byron Goggin got a drum set and invited Johnston and Stephens to play. Bassist Miguel DeJesus moved from Puerto Rico to Atlanta, GA. With the knowledge that God had made music his life's call, he went on to study music at Greenville College where he befriended the Jars Of Clay members and helped to inspire their hit Liquid. Miguel then moved to Nashville, TN and met his fellow Poets through mutual friends. While pursuing Christian music as a guitar major at Belmont University in Nashville, native Californian Kevin Breuner also joined Smalltown Poets via mutual friends. "And we all lived happily ever after," Kevin quipped. "We're riding off into the sunset..."

Michael, Danny and Byron had played in different bands ever since high school. Said Michael, "In May of 1996 the three of us met Kevin and Miguel. As soon as the five of us started playing together we discovered that this is the band we have always wanted to put together."

"This is the thing musically, of all I've done since high school, that's the most satisfying," added Danny. "It's relevant. It's very modern. It makes sense. The chemistry is there. Everyone that plays in the band just fits in exactly as you sense they should. When it's right, it's right. When this band started to happen, we just knew this was it."

"Michael and I have been challenged ever since our writing class to be real poetic and real creative with our lyrics. And yet at the same time just to be honest and accessible," said Danny. "That's even what the name Smalltown Poets means. We view ourselves as the guys next door -even-keel, straightforward and real upfront."

How did they come up with their memorable name? The genesis of the band was originally called the far less memorable Villanelle. Remembered Michael, "Danny and I were driving up to Gospel Music Week in Nashville last year and listening to the Braveheart soundtrack CD. We had been racking our brains for months, searching for names. We'd be embarrassed to tell you what some of them were. In the liner notes, there was a quote from Mel Gibson about the story behind the movie, where he mentioned the Scotsmen who 'fought like warrior poets.' We thought that had a great ring to it, but there's no way 'Warrior Poets' would be a good name for a band. It didn't take us long to link Smalltown and Poets together, since that's where our roots are. We got an overwhelming response from the band and management, because people that knew us knew that the name exactly summed up what we were about. It keeps us accountable because we remember where we come from, the roots of how we grew up in the Church and were ministered to by Christian music."

Danny continued, "It wasn't just a matter of breaking up Villanelle and retiring the name. We completely started from scratch. New songs, a new style that was more in the modern rock vein that we'd been wanting to play, a new outlook, some new players. But more than anything else, a new commitment to excellence. God really laid it on our hearts that he wanted us to take our musical ministry and career to the next level. We feel like this band is going to touch a much larger audience."

Sincerity in writing does not mean always gushing about their faults and the Poets are eager to voice the joy they have found in their relationships, and that includes their faith. "We want to communicate with anybody who will listen. We want to share what we've experienced in our relationship with God. Obviously as Christians, we want everybody to have access to that grace we have experienced in Christ. It's not really a planned thing. It's just natural."

Not only do their true-to-life experiences translate into the Smalltown Poets' songs, but stories and poems often shared in concert have inspired the artful scenes of "Who You Are" and the troubled imagery of "Monkey's Paw". "We desperately want to continue being creative. We feel like that's a gift that God has given us that we don't want to squander," said Danny. "We want to say things in a different way than they've been said before. Not to the point that we're so obscure we don't make any sense, but just put a different twist on things. It's fun to listen to lyrics and see images being created through word pictures. That's the fun of poetry. And songs are just poetry put to music."