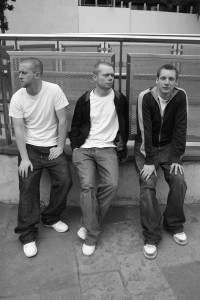 One of the freshest acts on the flourishing UK gospel hip-hop underground are Liverpool's Souls Rest. Their 'Extended Wordplay' EP was something of a turntable hit on Cross Rhythms radio and their self-titled latest CD shows that that was no flash in the pan. Consisting of James Dodd (also known as D O Double Dee) on drums, Phil Salmon (Juvenile) on the decks and Duncan Adamson (The Rawface) on vocals, the group first got together in January 2003. Souls Rest were originally a five-member band but since early 2006 have operated as a trio. Duncan spoke about the group's vision and early experience. "Our vision is to use music to positively influence the secular scene and impact non-Christians with the Gospel message. We feel that we have a message that people need to hear - especially in places like clubs where there isn't always a lot of light. Our first gig was for our CU as part of their mission week - we managed to stretch five songs over about an hour! Shortly after our debut gig we recorded our first CD; 'Hip-Hop - Fun For All The Family'. We recorded this in James' bedroom which was fine aside from the smell and the fact that his computer kept crashing! After three days recording we lost everything and had to start over. That certainly tested our resolve!"

Souls Rest's next recording venture, 2004's 'Extended Wordplay', attracted the attention of Cross Rhythms with both "Cares" and "Mr Grey" getting considerable airplay. The Rawface spoke about the tracks. "'Games' is about what lengths we go to to kid ourselves about reality. I used the nursery rhyme theme to emphasize the fantasy world in which most people live - a world without God. 'Mr Grey' came out of watching people on the bus and noticing how miserable most of them seemed. Have you ever noticed how people want to be in the background, they don't wanna be seen or noticed? 'Mr Grey' is the epitome of this, he goes to work in a job he hates just to make money and refuses to challenge what he sees around him. The song highlights the futility of this and the need to find fulfilment in Christ. The theatre theme aimed to show the facade of the guy's life and therefore the falseness of so many people's everyday masks - theatre is acting and that is what so many 'Mr Greys' do everyday."

Now Souls Rest have released a self-titled EP. Said Phil, "This is our third CD and is noticeably different from the previous two due to our line up changes - it's definitely a bit more hip-hop - it floats my boat. We recorded at Rooftop Studios in Liverpool with Chris who's a mate so we had a good laugh. We did six tracks in five days and it was the first time we recorded as just the three of us so it was definitely a learning experience! We've probably all got different ideas about the best two tracks - mine are probably 'Soldier' and 'What Makes A Man'.

Duncan has rather different ideas. "That's rubbish! The best tracks are obviously 'This Is My Prayer' and 'Sister'. 'Sister' was a particularly deep track for me - the lyrics are very personal and it's quite an emotional song."

Souls Rest's music is released on Urbeatz. Phil explained who that company is. "Urbeatz is a record label based in Liverpool which aims to support and encourage local urban talent. We've become involved with what they do which means helping to run and appearing at various nights in Liverpool."

One recent breakthrough for the band is getting through to the final stages of Liverpool's Urban Idol competition in November. Explained James, "We heard about the competition through Urbeatz so we went to the auditions and with the help of a bung or two we sailed through to the final 12 - affectionately known as the 'dirty dozen' (that is not our slogan!)" Duncan added, "Yeah, it's cool cos we get to play at the Philharmonic Hall for the final showdown."

I asked Souls Rest about their unexpected appearance at Greenbelt with the Love & Joy Gospel Choir. Commented James, "It was the first time we played with them - we go to the same church as them so I'm sure there'll be loads of opportunities to work together. Duncan has done some rapping on one of their new tracks." Duncan piped in, "I have a bit of an obsession with choirs on hip-hop tracks especially after listening to 'Ghetto Pop Life' by Dangermouse and Jemini. One day we'll use the choir on some of our stuff..."

I concluded my quizzing by asking each Souls Rest member what plans they have for the future. Replied Duncan, "I don't wanna sound cliched but we wanna take this as far as God allows. Our future is dictated by him and I'm excited by that fact." James commented, "We've recently been challenged about having the right heart for this, serving God not money - we feel God has been teaching us and preparing us for something big." Phil added, "On a practical level we're getting the new EP out there to as many people as possible - trying to get support from a label and some form of distribution - also just trying to gig as much as possible firstly in and around Liverpool, becoming established here and then progressing from there."