One of the best known and most influential churches in London is the non-denominational new Wine Church. Founded in 1993 by the hugely respected Dr Tayo Adeyemi, a Leeds-born, Nigeria educated doctor who came to the UK to work in London but instead planted a church in a refurbished cinema in Woolwich, south east London which at its height had over 5,000 members. Dr Adeyemi invited Lawrence Johnson, one of the most important figures in British gospel, to join the church. Under Johnson's leadership the New Wine choir was reorganised and renamed and in 2018 the Sounds Of New Wine album 'The Siege Is Over' was released. Already the album has been acknowledged as one of the best albums ever to emerge from the insular world of British gospel. Johnson visited Cross Rhythms to talk about 'The Siege Is over' and his decades' long experience in music.

Tony: Can you give me a quick rundown of your musical history?

Lawrence: I started the London Community Gospel Choir with Bazil Meade 37 years ago. After that I went on to form the R&B/gospel crossover group Nu Colours, who were signed to Universal. I worked for Simon Cowell for about 15 years, working on various secular artists - George Michael, Westlife, Lemar, Stevie, Mary J Blige, Tina Turner.

Tony: Were you a vocal coach to those artists?

Lawrence: Vocal coaching, vocal arranging - sometimes they wanted a choir on it, sometimes they wanted me to arrange the vocals or other parts. Recently I've done six songs on Sam Smith's new album. Last year I did a track for Alan Menken on the new Aladdin film that's coming out. I've been very much involved in contemporary stuff.

Tony: Have you been a member of megachurch New Wine for many years?

Lawrence: No. I went to visit the church many years ago - about 15 years before - to see the original members of LCGC. Bazil said, 'Come and see the the new choir. They're singing at this church called New Wine.' So I went to see them.

Tony: How did you get re-connected with them?

Lawrence: When I went to New Wine church and saw the choir I thought, 'This choir's not in a good place.' But I also realised that sometimes it's about who's there to help. They had a heart of the Spirit but not people who had my experience. The pastor asked me to come to the church, so I went there 11 years ago and started from scratch. I said to the pastor, 'If we're going to do this, we're going to have to do it my way, and we're going to have to audition everyone once again.' So we auditioned a hundred people, and I was left with 10. I was Billy No-Mates for quite a while. The rest is history.

Tony: Your standards are obviously much higher than in most churches where, if a person wants to sing in the choir, they probably can.

Lawrence: I have a theory. I notice they say, 'Oh, let's put them in the choir.' But they don't let anybody go up there and preach. That, to me, is a strange thing. The one thing we can all do in church is worship: whether you're an usher or an engineer, what you're doing is worshipping. So I felt that, if we're going to sing, at least do the basic. If you can't tell the difference, there's a problem there. I said that to the pastor, but thank God the pastor was very much into the idea of excellence. He said, 'LJ, if that's what we need to do, let's do it.' But what I did do, because I realised some people had been in the choir for years before I came there, is set up a workshop so they would get training. For those who wanted to stay on, we trained them, and they could re-audition three months later. Unfortunately, a lot of people realised, 'I'm not sure I can do this choir thing.' Before, they were just singing as a hobby. For me, I love singing, I want us to be the best we can be as a team. Over the 10 or 11 years, that's what we've done as this team.

Tony: Isn't there a risk that someone failing their audition would go off in a huff and leave the church?

Lawrence: Yeah. That's what happened. People left the church. It was a bit sad. We'd set up a situation where people, if they wanted to try again, we'd train them. I realised we still had a part to play. It wasn't like my own choir, LCGC, where it was my baby so if you didn't make it, you just didn't make it. This was a church choir. I had to be a little bit more sensitive. But there was still a standard to be reached because of where I came from. 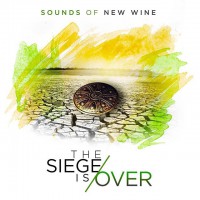 We lost our senior pastor who brought me to New Wine, Pastor Tayo Adeyemi, five years ago. It was a hard thing: we lost our founder. And then last year we lost our new pastor, Pastor Michael. We've lost two pastors in five years, so the church was in a really tough place. This album is based on what we've been through, our biography of what God's done for us and how we've got through - hence the album is called 'The Siege Is Over'.

Trust me, New Wine Church has been through, and arguably too, what no Church has never experienced! The Church lost their two Senior Pastors within a space of Five Years. Devastating is an understatement. Having been a member of New Wine Chuch even before the Church started, I know what I am talking about. I can only hope the songs will help heal the pain as much as possible.