Stars Go Dim: The "You Are Loved" hitmakers talk about adoption 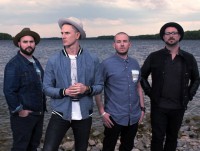 Every few years Nashville CCM comes up with a song with the capacity to touch tens of thousands of lives. That has happened with Stars Go Dim's moving recording of "You Are Loved". The band's Michael Cleveland spoke to journalist Chelsey Patterson about the origins of the song and his family's journey with adoption. He said. "A few buddies from LA co-wrote this song with some of the band members. There are nine kids between our band, and we all have daughters. This is the message we want our daughters to hear. It's a simple yet very powerful message. We're all made for a purpose, and God didn't make a mistake. If you're struggling with identity, remember that you are loved by your Father more than you could possibly imagine."

Michael continued, "My wife and I have been married for eight years. During the first few years, we had several miscarriages. My wife's dad passed away and we moved to Kansas City. We'd talked about adoption, and it's something we'd always been open too. In Kansas, you're required to go through six months of classes before you're eligible to adopt. We were asked to fill forms to choose what kind of children we were looking to bring into our family. Healthy newborn babies are the first children chosen; and we knew that children older than three years old and sibling sets were drastically less likely to be adopted. My wife and I told the agency that we wanted to adopt the children that no one else wanted. One evening, we received a phone call that two little girls were eligible for adoption. We drove down to meet the girls, and were instantly in love. The Sunday after our adoption was finalized was Father's day and it was such a sweet time! God has been so good to us through everything, and our girls are doing great! They love listening to Bible stories, have done exceptionally well in school and have integrated beautifully. Another sweet gift from the Lord was our baby girl that was born this past September."

Stars Go Dim from Tulsa, Oklahoma, were formed in 2007 as a side project of the successful Christian rock band Pillar. The band originally consisted of Chris Cleveland (vocals, piano and guitar), Joey Avalos (guitar), Michael Wittig (bass guitar) and Lester Estelle II (drums). The band released a self-titled EP and went on to open for Switchfoot, The Fray and others. In 2009 they released their full-length album 'Love Gone Mad' and two years after that issued two singles "Like I Mean It' and "Hesitate", the former receiving rotation on MTV. By 2015 the line-up of the band had settled on Chris Cleveland, Michael Cleveland, Kyle Williams and Josh Roach. In was in 2015 when the band signed to Fervent Records, a Word Records imprint, that they enjoyed their Christian radio breakthrough, their "You Are Loved" from their 'Stars Go Dim' Fervent album receiving airplay across the US.

After a spell away from music Stars Go Dim are now planning a new release. Said Chris Cleveland in a Facebook announcement, "2018 bring it on! New music and a new album coming. I cannot wait for you all to hear these songs. I'm so hopeful for this season and year together. I know many of you are searching for something. . . Love, faith, hope, identity. Join me this year as we walk through that journey together."