Steve Grace: An Australian rock and roller getting the nod from the CCM industry 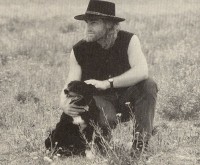 Any life that starts in the highlands of New Guinea is bound to sound a bit exotic to those from the northern hemisphere. And any life that can take someone from truck driving in Wollongong to record company shopping in Nashville is a sure bet for a story, right?

Australian singer/songwriter Steve Grace has indeed led a colourful life, spending his childhood on a Wycliffe Bible Translators mission station in the aforementioned New Guinea, then moving to industrial Wollongong in New South Wales for his teenage years. Though Steve had begun to write songs early on, it was the influence of John Smith, founder/leader of the God Squad motorcycle club, that inspired Grace to take a more direct approach to his communication.

"I used to write some really deep, meaningful songs until I found that people responded to the really simple ones I thought were a bit corny. I began to see the effect a simple song could have on the right audience, very much in line with the parables Jesus told."

Soon Grace was singing in pubs, hotels, high schools, churches, and on street corners across Australia, eventually recording his first album, 'Young Australian Man', in 1986. Two years later, Steve felt God's call to leave his truck-driving job in Wollongong and move his wife and two sons to Melbourne, where he began work on his second album. Produced by Beeb Birtles (formerly of the Little River Band), 'Children Of The Western World' features some of Australia's finest musicians and Steve's best songs to date. Originally released on Word Australia's Triune Records, the album has just been released in America on Reunion.

Though he typically performs solo concerts five and six nights a week all over the country, Steve said it took an act of God to get him on stage. "I've never had a great desire to get up in front of people. In all honesty, it terrifies me. But ultimately I have a greater respect of God than I have a fear of man, so I do it." And do it he has, headlining with touring American artists like David Meece, Carman, Kenny Marks, Shelia Walsh, and opening for Amy Grant's 'Lead Me On' tour.

Grace believes God has given him a vision for developing the Australian Christian music scene, and his extensive travels have led him to other local artists, who find encouragement through his organization, Young Australian Ministries. But, true to his missionary upbringing, music is not an end to itself. "Paul speaks about being all things to all me, and I've really learned that after three years in full-time ministry. It involves getting rid of a lot of the 'social securities' and just getting out and serving God and His people. Music is not an obsession to me. If the Lord told my wife and I to become missionaries to Thailand tomorrow, I'd be glad to do that. My priorities, after obeying the Lord, are my wife and two little boys, and I believe ministry and career really come after that."
This article first appeared in America's 'CCM' magazine.