Steve Legg: The evangalist/escapologist with a Christmas concept project 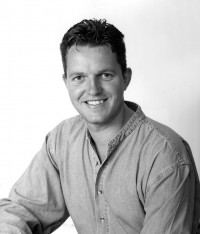 Tony: How does an escapologist and an evangelist suddenly come up with a Christmas concept album? Have you been a closet muso all along?

Steve: I heard a story a couple of years ago that moved me profoundly. It was all about a small boy who heard the Christmas story for the first time at his primary school. He was captivated as his teacher explained about the first ever Christmas but something troubled him. He was too scared to ask in front of his friends, but at the end of the day asked his teacher why Mary & Joseph had named their son after a swear word. I work in hundreds of schools and am so aware that there are generations of children and young people who have no idea of who Jesus is, and I thought that Christmas was a good time to tell people. So, initially what I came up with was a Christmas musical where I wrote the script. I obviously needed some songs to go with it, so I asked my mates Simon Goodall and Mick Gisbey to write some. The boys came up with the goods and we produced the musical. I thought the songs were so good we should release them on an album so adults could enjoy them too. I then asked my mate Russell Boulter if he'd narrate the story for me, and the rest is history.

Tony: There are amazing number of big names associated with both 'It's A Boy' and 'King Of The Hill'. How on earth did you get people like Russell Boulter or Big Ben to be associated with the project which could pay them little or nothing?

Steve: I've been involved in full time evangelism for 15 years and have made many friends. It was just a case of getting on the phone and asking my mates if they'd help out with the projects. I can say, hand on heart, only one said "no". The others all did it for free, in fact some actually gave money to make it happen.

Tony: Were you surprised by the success of 'It's A Boy'?

Steve: In one sense, no. I felt this project and 'King Of The Hill' were ideas from God. I have hundreds of ideas a day. Some good, some bad and some God. This one was from God and I felt would be a great success. And it certainly was. Around 500 schools and church groups used the musical and we sold over 4000 CDs. It was such a success that I'm turning it into a 30 minute cartoon with celebrity voices including Cannon And Ball, Joe Pasquale, Fiona Castle, three of my mates from The Bill, David Oyelowo (from BBC TV's Spooks) and many others. Sir Cliff has agreed to sing the title track for us. The cartoon is nine months in the making then in October we aim to send a free copy into every single primary school in the UK (that's 25,199 schools - State and Independent). It's a huge vision with a hefty budget but if we don't do it, then maybe no one will.

Tony: What's the thinking and vision behind 'King Of The Hill'?

Steve: I was so encouraged by the success of 'It's A Boy' I felt Easter was too good an opportunity to miss, so that's really how and why 'King Of The Hill' came about. Once again I wrote the narration and Simon and Mick came up with the goods on the song front with Graham Kendrick giving us a song and taking the time to sing it for us as well.

Tony: Now you've got Fierce! on your side, are we going to see the end of Steve Legg, escapologist and the beginning of Steve Legg, musical communicator?

Steve: Anyone who's heard me sing will be holding their sides in laughter at the thought of that one Tony! No way. As an evangelist I want to be as creative as I possibly can in reaching people. I still travel far and wide, have just published book number five, have a couple of albums under my belt and am now very focused on the cartoon for Christmas 2003. I'll try anything to reach people. That's where my heart is.

Tony: What's your favourite track on 'King Of The Hill' and why?

Steve: I think it has to be 'Show Me The Cross'. Cathy Burton sings it and it so sums up what Jesus went through on that first Good Friday. While we were talking about who should sing it I remember someone questioning whether it was appropriate for a woman to be singing that particular song. But I felt very strongly that Cathy should do it. On that afternoon all of Jesus' friends had run away. His mates had all left him and one of them had actually betrayed him. A handful of women were the only ones left. Cathy's voice captures the desperation, darkness and desolation of what happened on the hill of Golgotha on that Friday of AD30.