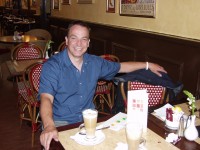 The release independently of the 'Arise' album brings into the spotlight one of the most gifted and least publicised worship leaders and songwriters in the British Church, Steve Mitchinson. Steve has co-written several songs with Canada's Brian Doerksen including "Holy Fire" (on Vineyard Music UK's 'Come Now Is The Time' album), "All Creation" (on the 'Hungry' album) and "When You Call My Name" (on the 'Surrender' album). Steve is currently worship leader and assistant pastor at Winchester Vineyard having previously been the worship leader at South West London Vineyard from 1999 to 2001. Born in Newcastle-under-Lyme, Staffordshire, Steve moved from the Anglican church to Vineyard in 1997. For such an experienced musician and worship leader, it's surprising that 'Arise' is Steve's first solo project.

Talking about it he said, "Principally I learned how I wouldn't do it next time, as this album took two years to finish, recording at home and at the Winchester Vineyard Church building. I was so grateful to my good friends who helped me do it in their spare time (and that they were still friends afterwards!) and was pleased with the result. Next time though, it will be in a studio with a producer and some form of budget. This I have promised to Karen (my wife)! Important safety tip - do not get involved with editing and mixing your own voice, ever! The album came from feeling God nudging me to take the songs I had collected over a few years and putting them in a format where others could hear them. Just so people could have the songs and see what God would do with them. I wasn't sure that the world really needed another worship album, but it has been wonderful to hear some of the stories of how God has touched people through some of the songs. Guess maybe I was wrong."

I asked Steve what it was like working with the world famous Brian Doerksen. Said Steve, "I have been so very grateful for the friendship that Brian and I have. It has been something that I have valued highly since we met in 1997 and we have smiled many times as we recall how unlikely it was that we should have met, and of the blessing that our families have had from relationship in the last years. Writing together has been fun, the co-writing experience can be amazing, as you join two peoples creative talents, melodies and vocabulary and try to create something together. I have enjoyed the process and learnt a huge amount. Brian is the ultimate craftsman -believing passionately in the well written song. Re-writing songs until they are finished is a great discipline and one that I will probably need re-hab from in years to come. We thought of starting Re-writers Anonymous as a self help group for those who are unable to finish a song!"

I concluded by asking this seasoned worship songsmith about Winchester Vineyard. He said, "Vineyard Centre, Winchester is the home of the Winchester Vineyard. It was originally a bus garage - and now a church - since 2001. I had such huge support from the church in recording 'Arise', with Hugh and Ginny Cryer the senior pastors cheering me on. The massed voices of the church appear on 'Arise' and 'Thine Be The Glory'. Many of the songs have been used in worship there."