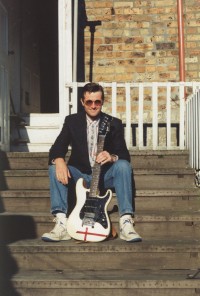 Afar cry from the madding crowd of gospel Grammies, Dove Awards, and Word's latest megastars are the musicians, singer-songwriters and artists who devote their time, effort, and energy to the rarely glamorously 'grass roots' level ministry. Scotland's Steve Nelson - by day a civil servant - tours schools, colleges, and youth clubs in Scotland, communicating the message of the gospel through music.

After becoming a Christian in 1975, he started attending a local church in Troon, where he was first involved with the band Triumph doing mainly instrumental. The band consisted of a few members of Steve's church, and between '84 and '87 they released two albums for Leed's based Ears And Eyes, the first being a demo/tester entitled (inspiringly) - 'Seven Trax', and the second 'Don't Look Back'. Triumph, with an excellent lead singer in Jim Ritchie and some energetic management, quickly became the hardest-gigging band on Britain's Christian rock circuit. But in Christmas of 1988 Steve felt he should leave Triumph

"Primarily I felt I needed to spend more time with Heather my wife," explains Steve, "but also Triumph seemed to be going for bigger concert type gigs, there was no animosity when I left, it was just a matter of having a peace about the whole thing."

At the moment, Steve, and his Australian-born wife Heather - who by the way doubles as his roadie! - enjoy the prayer support and backing of their Scottish Episcopalian church in Prestwick. He combines his day job as a civil servant with being a self-employed guitar teacher.

At the invitation of various organisations like The Universities and Colleges' Christian Fellowship, he holds on-site concerts with the support of Christian students.

"It was amazing at one time, I did a concert at an art college in Dundee in the canteen. All these students were just hanging around. I thought they were going to be sceptical about it. But they were so open I had some great conversations - they really wanted to know where I was at, and where I was coming from.

"It's unfortunate that some people don't regard rock music as a valid means of communicating the gospel."

The 'grass roots' level of ministry some have called a breadless art. Indeed, it seems to ring true that the British church are slow to ease open their purses and support these relative unknowns - who almost certainly have the greatest effect on Britain's unsaved.

"There's a dilemma for the musician - how professional should you be? I'm not aiming to make the big time, but it's very easy to side-track your calling and go professional. Mind you, I'm not saying that all Christian musicians, and performers should give up what I'm doing in school and colleges because it sounds the 'spiritual' thing to do. It really is a matter of what God's called you personally to do."

Steve's debut self-financed solo album 'Take Away The Mask' was written, performed, and produced by Steve at most of his concerts (his first English one, by the way, will be in Barrow-in-Furness in December).

He's primarily a musician, not a vocalist, as the tape shows, although he does receive vocal coaching. Steve injects most of the tracks with heavy distortion on his lead guitar.

"Take Away The Mask' is mainly a message about trying to look happy when you're really depressed - although there isn't actually a title track," explains Steve.

There are some unusual tracks, though, "Clothes", which on the tape's insert is subtitled - "It's What's On The Inside That Counts". It is an instrumental which certainly leaves a lot to the imagination.

"Trilogy" again an instrumental, is as Steve describes, "an intangible thing. It's rather...spooky, and the progression within the theme speaks of creation.

"If Christians are tuned in to the creator God, than their music should reflect that."

At the moment Steve's wife leads the worship at their church, and Steve plays fretless bass. He seems to shun any thought of the big time, but is intent on plugging away at what he has found to be his calling. Professional he may not be, but a reaper and a labourer he is.

Remarks Steve, "One of the hardest things, is to persevere. You don't often get a lot of support, but the most important thing is to really keeping seeking God."