Steve Parsons: The Cornish singer/songwriter with a new album

Cornish singer/songwriter STEVE PARSONS has just emerged from ICC Studios with a fine album. He spoke to Tony Cummings. 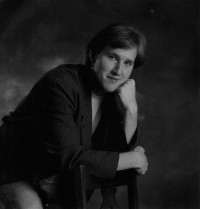 There's hardly a musician on this planet that hasn't at some occasion or other muttered the immortal words, "I'd love to do music full time." For most, the desire remains an unfulfilled pipedream as they wait and hope that one day a man with a big cigar will turn up at one of their concerts waving a contract and a cheque book. Steve Parsons took the plunge to the risky depths of the professional music without such a visitation. "I was at a youth camp where I'd been ministering," says Steve. "I was washing the dishes and thinking about how I'd love to do music for the Lord full time. My thoughts developed into a prayer. The conviction began to grow that I should do it, not wait for a financial opportunity to do it because I could be waiting forever, but trust the Lord to provide work. I had a job in Boots the chemist in the photo lab and it was difficult chucking it in to go and live by faith particularly as I didn't have a single booking in the diary when I did it! But I felt the Lord telling me to trust him and a day or so after the first booking came in and I was away!"

Since that giant leap in April 1993 Steve Parsons has played concerts and missions all over the country. He's also played in Malta on four occasions working with evangelist David Flanders. In fact, the very evening I spoke to him at his home in the Cornish village of Trevisco he was about to set off for another trip to Malta.

Steve grew up in Cornwall. Both his parents were Christians - his father was a preacher - and at age 11 he made a decision to follow Jesus for himself.

At school he played in a brass band, learnt drums and was soon picking out his first compositions on the piano in the school music room. Remembers Steve a little ruefully, "They were very much cast in the 'Jesus died for me/At Calvary/To set me free' mode but they got me started." As his compositional skill developed so did opportunities to play at churches and missions until that momentous prayer time in the youth mission kitchen. With a grittily expressive voice and the ability to play keyboards and guitar, word-of-mouth of Steve's ability has gradually spread among the churches. It has not always been easy financially. "Sometimes churches fail to grasp financial realities, like I'd travel miles and miles, play at the event and afterwards they'd give me five pounds and say, 'I hope God blesses you'. And once I played a concert to 200 people where a one-pound admission had been charged and afterwards they said, 'We'll send you something in the post' and I'm still waiting a year later! But other places are good and honourable and give a generous gift. Through it all I always remember what a preacher said to me about putting your trust in God and not in people."

A key means of building a grassroots ministry is recordings to sell at concerts. In 1994 Steve made a tape 'Tears Of Love' at a friend's house in St Austell. It got a pretty favourable review in Cross Rhythms (7 squares) though was limited by being done on a midi 4-track. Then in 1995 Steve made what could well prove to be his breakthrough recording. "Wherever I played people would come up to me and ask when are you going to do a tape of your new songs. Ruth, who does my admin, began to urge me to go for it and do a 'proper' album. I'd been speaking to my pastor about the need for Christian artists to pursue creative excellence and the highest standards. It dawned on me that I had a responsibility to make the songs as good as I could. So I booked into ICC. It was a big act of faith. ICC's Studio A is not the cheapest and I didn't have a penny when we started recording and still didn't have a penny when we were mixing! I was getting a little nervous! But then the money came in and I was able to pay the bill!"

The album was engineered and produced by Bruce Ponte and as well as Steve on vocals and keyboards featured friends Dan Wheeler (guitars), Steve Walker (bass) and Sarah Lees (backing vocals). A bright, slick set of evangelistic pop gospel songs the album called 'Simple Faith' is out now. The title song is particularly outstanding. Comments Steve, "I wrote 'Simple Faith' at a time when I felt that everything was getting too complicated in my life. I'd started off with a child-like faith but as the years went on I started getting different doctrines thrown at me. Did I believe this, did I believe that? It was very complicated. Then I heard God saying, 'I've got a plan for your life, don't try and live too far ahead. Get back to a simple faith.'"

Other outstanding songs on the album are "Throwing Away", an R&B-cum-rock opus and a moving ballad; "My Heart Longs", with a simple but effecting arrangement. "I'd originally had this big arrangement all sequenced up but when Bruce heard the song he got me sitting at the grand piano and singing it really simply. Then he put these luscious harmonies on it. It's my favourite on the album now."

I concluded our chat by asking Steve whether he felt that living in the farthest outpost of England - Cornwall - was a hindrance to establishing a successful ministry. "I suppose it might be. Some people think I'm living on the other side of the world. But there are great opportunities for ministry down here. People say Cornwall is hardened to the gospel but everywhere is hard until the Spirit comes and softens people's hearts. At the moment I rely very much on word of mouth to get bookings. Consequently, there are parts of the country I haven't reached yet. But it takes time to get a ministry established. I'm just very grateful to the Lord to where he's led so far."

I liked reading 'Pastor' Steves' testamony. I didn't realise he is a professional CHRISTIAN ARTIST. I know him as the joint Pastor of LIFE CHURCH in Bollington Cheshire and someone I in to for realy sound CHRISTIAN advice.. I'm going to have to invest in some of his music sometime. AND get my pressent fellowship to book him,too. (I HAD to look TWICE as his pic though, I've never known him with hair)! Luise Jones