In his four decades plus of creative engagement Steve Taylor has achieved more than most could even dream of. As a rock singer he was one of the most vibrant and provocative artists ever to grace a Christian fest stage. As a record label boss he oversaw one of the biggest crossover hits ever with sixpence None The Richer's "Kiss Me". As a lyricist he has penned many of the Newsboys' greatest hits. And as a film director he's already clocked up some intriguing celluloid offerings such as The Second Chance starring Michael W Smith. Now it's quite possible that the 54 year old renaissance man could have pulled off his greatest ever creative triumph. The Taylor-directed feature film adaptation of Donald Miller's best selling book Blue Like Jazz has received a largely rapturous response from the critics. The New York Post stated "this is a rare bird, a sincere movie about Christian faith"; Paste magazine called it "witty, provocative and life-affirming"; the New York Times stated it was "sincere and literary" and the San Francisco Chronicle enthused "it tackles existential struggles that many of us grapple with - and the film industry virtually ignores - while doing so in an entertaining way."

The book Blue Like Jazz, published in 2003, is a semi-autobiographical work chronicling Donald Miller's experiences and thoughts while attending a liberal arts college in Portland, Oregon. It is definitely non-religious as it examines what true Christian spirituality might look like in the head-spinning distorting mirrors of the post modern world. The book received major sales and critical success with Paste magazine naming it one of the 20 Best Books Of The Decade.

The long planned film of Blue Like Jazz seemed to have floundered due to lack of funding until two fans created a site called Save Blue Like Jazz where they urged fans to help raise money to fund the movie through the Kickstarter website. By October 2010 the campaign raised over $340,000, more than doubling the original goal of $125,000.

With Steve Taylor directing the crew filmsx in Portland, Oregon plus spending some time in Nashville, Tennessee to get a few scenes. The cast consists of actors, such as Justin Welborn, as seen in The Crazies, Marshall Allman, who more recently joined the cast of True Blood, and Claire Holt who starred in Mean Girls 2. While filming, the crew opened up some scenes to the public. They used mainly college students and people who were available as extras.

Despite the overwhelming praise the film received when Taylor and Miller undertook an on-the-road screening tour of the US with the film, before its launch into general cinemas on 13th April 2012, Blue Like Jazz's examination of what Miller calls "dangerous theological ideas" and scenes which include something perilously close to a drunken orgy also produced sharp criticism in some conservative Christian circles. In an interview with JesusFreakHideout Steve Taylor spoke about its potential to offend sensitive Christians expecting a safe, family-orientated film. He said, "Firstly, I want [Christians thinking of going to the film] to know
that it's rated PG-13, and it earns its rating. When I sat down to write the screenplay with Donald Miller and my longtime collaborator Ben Pearson, we decided from the beginning that if this story was worth telling, it was worth telling truthfully. And we didn't see how it was possible to tell a story set at Reed College - aka "the most godless campus in America" - without portraying the reality of campus life there. It was a challenge to keep it within the realm of a PG-13 movie, and we tried to walk that fine line between realistic and gratuitous. I'm sure there will be some viewers who may be offended at some of the content. But I'm even more sure that most of the people who will be interested in our movie would be even more offended if it was sanitized for a family audience.

"I'm not sure where we got the notion that any media with Christian content must, of necessity, be "safe for the whole family." If we made a family-friendly version of the Bible, it would be a much shorter book."

Taylor was asked whether personally interacting with people at the screenings of the film changed his perception of the Blue Like Jazz movie. "Definitely. When I did music, I could play you, say, my new album, then ask you with a straight face, 'So - was it great, or is it just over your head?' Listening to music is much more of a subjective experience, with a much broader range of opinions on what's good and what's not. But when it comes to filmmaking - especially when you're telling a story - I think it's a lot less subjective than we wish it was. You can tell a story well or you can tell a story poorly and all ranges in between. So, automatically, when you become a filmmaker, you have to be much more in tune with an audience. And you really don't know anything until you show it to an audience. It's then that you find out: Is the movie paced right? Or are they getting things before we think they're getting them and, therefore, this scene should be cut out because they already know what's been going on? Are they confused in places where we didn't think they would be confused, where we might need to add a scene back in to clarify the action? So the engagement with the audience changes because you're telling a story and you don't want people to be confused.

"So we started doing - I guess you can call them test screenings - last summer, and I would sit in the room with the audience and sometimes Don [Miller] was there as well and I would take notes. I would have them fill out forms. Part of it was perception of what they thought overall, but part of it was 'Does this make sense? Were there parts where you got confused?' Anything like that. And some consensus opinions might emerge about 'This character is confusing me' or 'I don't understand what's happening at this plot point' and those are the things we pay attention to because it's become some measure of a consensus opinion. And then you go back and take those notes and try to fix those things that might be confusing. So my very long answer to your question - yes, it does affect the way the movie gets made. The other big one is, it's a comedy! But if people aren't laughing, it's not a comedy! So I'm really in tune with: Are people laughing? Are they not laughing? Why aren't they laughing if they're not laughing? Is there something we can do to change that so they do laugh? So you go back and you tweak things, you change the timing, different things like that. And some jokes just get cut! Or there are some jokes that aren't playing. There were a couple places where a joke wasn't playing, but it started off screen, so you change the off screen line and then it works great. So there's a lot that goes on. [Director] Judd Apatow talks a lot about the incredible amount of test screenings that he does, where he has a camera trained on the audience, because he's trying to make sure even that the laughter from the audience doesn't step on the next joke. So we did a lot of [test screenings] and I loved the process. You learn so much from sitting with an audience." 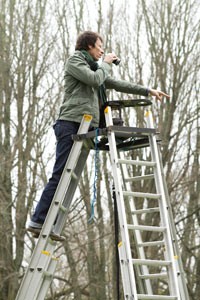 Steve spoke about what originally drew him into the Blue Like Jazz story. "I read it six years ago and, even though it's not a book that you put down and go 'I can see this movie in my head,' I immediately wanted to make this my next movie. I felt that I understood it really well. And I experienced some measure of it while I was a youth pastor at a church in Denver while I was attending Colorado University in Boulder, which is kind of its own version of Reed College in some ways. I remember, number one, just feeling lost in this new environment, and number two, thinking that 'I gotta change my approach to being a youth pastor because I'm not preparing my kids for this environment, y'know?' We talk about it a lot, how we have kids growing up in church and they go off to college and six months later they come home on break, wondering why they ever believed in Christianity in the first place. Because they weren't prepared for this radically different environment. So, from that standpoint, I thought I really understood what Don's character felt and after reading it, I felt like I'd made a friend. Like, Don was the guy I'd want to hang out with. And he'd written a book that I could give to anybody and not feel a little embarrassed or have to make excuses for it. A lot of what we wanted to do with the movie is we wanted to make a movie you could bring anybody to and you wouldn't have to be embarrassed and make excuses for it."

Taylor was asked, after seeing Blue Like Jazz in its completed form so many times, was there anything in the film that spoke to him on a personal level. "Yes. And largely because of the way the actors brought these characters to life. Because there's an alchemy that happens when the actors get a hold of the material and the way it works with a great cinematographer, like Ben is, our fantastic production designer; the confession booth scene is a great example of that, because you had two actors who really know what they're doing. They came in really prepared. They were there in that confession booth and the booth was designed beautifully by our production designer and lit in a way that kept the interest going even though it's two talking heads, and Danny Seim came along with this perfect piece of score to support it without taking up too much space. And all of those elements come together and when it works that way, it's pretty fantastic. Of course, our editor, Matt Sterling, I can't say enough good things about him. If you wonder why directors always gush about all this stuff and never say anything bad about anybody, it's because we are truly grateful. We know how in many places things can go wrong. When everybody does their job and everything goes right, it feels like a miracle."

Steve Taylor spoke about the $300,000 of Kickstarter pledges that had funded the making of Blue Like Jazz. At the start of the Kickstarter campaign Taylor had promised to contact each supporter personally, though he hadn't anticipated the final list would grow to include more than 3,000 names. "It took months," Taylor admitted, "but I feel like I've made several thousand new friends in the process."

Each donor also received an Associate Producer title, and is listed in the final credits of the film. "We broke two records, I think," said the director. "Not only was this the biggest fundraiser for a movie in the history of the Kickstarter website, we also win the award for most associate producers ever credited in a major motion picture!"

Taylor spoke about the entire experience of seeing the film go from concept to reality. "Right now I am soaking in unearned grace and I do not take it for granted."