Steve Taylor: The US alternative rocker with a film project

In November Christendom's most radical alternative rocker STEVE TAYLOR will be commencing a British tour with Guardian. In anticipation of this event, a video 'Squint: Movies From The Sound Track', directed by as well as starring Steve Taylor, has just been released. The making of the video was no ordinary pop promo story. Steve took the budget offered by Warner Bros for the video and instead of settling for a standard Hollywood shoot, spent the cash on equipment and air tickets. Then, with a small film crew, Steve set off for Hong Kong, Vietnam, Thailand, Nepal, India and Turkey. The footage he came back with makes for (to quote the publicity blurb) "one of the most ambitious film shoots ever undertaken by a rock artist." During his sojourn around the world, Steve kept a diary. These are extracts from it. 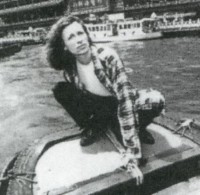 HONG KONG WEDNESDAY, JULY 28TH, 1993
I'm not sure this diary is such a good idea. For starters, I'm doing it knowing that other people will probably read parts of it in a magazine or something, so I can't make it too personal and tell about things that most people don't know, like the fact that every time I open my passport I'm reminded that my first name is really Roland, and that during this whole trip I'm going to have to sign all official documents Roland Stephen Taylor while I ponder in silence the Great Question of why my parents would name me Roland but call me Steve. (It could have been worse - my Dad's nickname was 'Roly'.)

Then there's the problem of talking into a little tape recorder, an act which makes the people around me very nervous, like I'm talking about them (which I usually am). Finally, I'm afraid that a mild case of dyslexia has me sometimes confusing the word 'diary' with the word 'dairy'. Since we've been warned in most countries to avoid dairy products at all costs, I think I'm subconsciously worrying about dysentery every time I push the 'record' button.
Take, for example, my first cab ride in Hong Kong. I honestly try to always be polite. But for some reason, every time I get into a foreign cab (and this includes all New York City taxis), I get suspicious that the cab driver is up to something funny, like maybe he's taking me around the same block five times. (This can all be traced to a particularly unpleasant incident nine years ago in Paris, but that's another diary.)

Do I really want everyone reading this to know that I argued loudly in front of our Hong Kong hotel with the cab driver about paying him another three dollars for every bag we're carrying, down to our shaving kits, and that he ended up cursing me in Chinese because I didn't tip him enough for his high-pitched shrieking? I think not, which is why I must remember to edit this part out when I get home.

Diary - it needs facts and feelings. And the fact of the matter is, I'm feeling pretty great right now. I'm on a round-the-world expedition to shoot music videos for my new album, 'Squint'. I'm going to exotic locales that I've always wanted to visit. I'm travelling with three friends disguised as a "film crew". And someone else is paying for it all.

If you'd dropped me in the middle of this city and asked me where I was, I would have guessed the set from Blade Runner.

It's nighttime in Hong Kong. Everything is in neon. The streets are crowded with people. It's so hot I can barely breathe. And even though there's no rain, everything is dripping. Each time I get dripped on, I look up to make sure no one is spitting on me from their 18th floor balcony (this is a phobia I've carried since high school). No sign of spitters, but there are cats everywhere. They don't prowl the streets - they prowl above the streets, along balconies and atop neon signs, adding just the right touch of surrealism to make this place really spooky.

This is our first day of shooting, and our mission tonight is to get some documentary-style footage for "Bannerman". Russ Long, our soundman (and the engineer on my new album), is doing double duty - he also plays Bannerman and is forced to tarry everywhere with him a black hooded cape with the large gold letters "BM" emblazoned on the back, along with the big "John 3:16" banner that is the song's raison d'etre (I dig these foreign phrases). The idea behind this video is that Bannerman keeps popping up in unlikely places, proudly unfurling his banner, so I have Russ get in costume, and we walk the streets in search of inspiration. Evidently Hong Kong suffers from a glut of caped superheroes, because nobody in this city is giving Bannerman a second look. I tell Russ not to take it personally and assure him that he looks way more ridiculous than these Hong Kongers are willing to acknowledge.

HANOI, VIETNAM FRIDAY, JULY 30TH
Two lessons from Vietnam: (1) The world is not the mall. (2) I would not want to be an Asian dog.

The sensitive reader may want to skip this next paragraph. My intention here is not to fuel stereotypes - I'm just telling it like I see it. On the way to Hanoi from the airport yesterday, I couldn't help but notice that the dogs along the road all looked a little nervous, like they weren't really secure in who they were as pets. This morning, as we make our way up a hill to a flower market on the edge of town, I find out why. A teenage boy is skinning a beagle, presumably for some sort of stir-fry.

We're here in Hanoi to film "The Finish Line". Why Hanoi? I'm not totally sure. I certainly have no political agenda in being here - when the Vietnam War was raging, I was just a kid. More than anything, I felt the song needed to be shot in a place few people have ever seen and I think we've found it. Unlike Hong Kong, this place has not even the faintest whiff of mall culture - no Gap, no McDonald's, no Coca-Cola. Tourists don't come to Hanoi, particularly American tourists. Neither do film crews, according to our guide, as she tells us "The Finish Line" is the first music video ever filmed in Vietnam.

We shoot various sequences throughout the city, all the while being watched by the locals. I'd assumed we'd be greeted with out-and-out hostility, but the people of Hanoi don't seem to hold grudges, which is surprising considering that 25 years ago American forces were bombing their city ("quite thoroughly", our guide reminds us) during what they call the "Aggressive War".

Crowds of kids show up wherever we shoot. It's all part of the fun - they watch our every move while we set up and really come alive when the music starts blasting through the loudspeaker. Russ is especially good with the kids and his job as soundman gives him a bit more time to goof around. Some of the children can't believe the size of Russ's nose and they point at it and giggle. Russ, of course, confides to them in a stage whisper, "If you think my nose is big, wait till you see my boss."

HOI AN, VIETNAM SUNDAY, AUGUST 1ST
Jesus shows up in some unlikely places.

We're in the city of Hoi An, a 15th century seaport right in the middle of Vietnam and things are getting a little chaotic. We're attracting lots of attention and even bigger crowds than in Hanoi, to the place where it's difficult keeping onlookers out of certain shots.