Top selling CCM star STEVEN CURTIS CHAPMAN has an album out which explores the nature of spiritual renewal. He spoke to Tony Cummings. 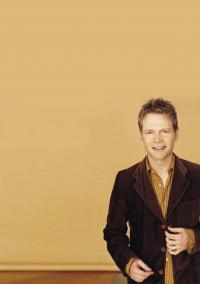 As anyone with even the haziest knowledge of American CCM will know, Steven Curtis Chapman is an institution. He seemingly picks up Dove Awards every time he records an album, his warm, engaging personality has made him one of the most liked figures in showbiz while his music, which has moved from country-tinged acoustic songs to hooky pop rock, has always demonstrated the kind of lyricist's skill that continually brings new insights to the old, old story. Now though with his new album things are again in a state of creative flux for the veteran. 'All Things New' is not only an appropriate title for a musician exploring new directions, it also echoes the album's theme - of spiritual renewal, inspired by the sermons of Steven's pastor and the writings of John Piper and Philip Yancey.

Before we spoke about his new album, I began by asking the singer about his latest trip to China. "I went out there with the evangelist Luis Palau and was very excited by the spiritual revival I found there. I even got the chance to meet up with a group of house church leaders and hear first hand about some of the amazing things God is doing in China. And on a personal level, it was very exciting as I was able to bring back our third daughter, Maria, who my wife and I have adopted. It really has been a thrilling journey for us both."

Sharing his thought process on the creation of his 14th album in 17 years in the music business, Chapman explained, "Lately I've come to realise that God will forever be making all things new. I'm only starting to know who God really is because he continues to reveal more and more of himself to me every day. He gives us new seasons, he gives us a new 24 hours each day, he gives us a new sunrise. All of these things continue to remind us that he is the renewer of all things."

It wasn't just the lyrical theme of renewal that consumed the singer/songwriter as he planned the album. "I was determined to push into a new season musically with this album," explained Steven. "I visited Brown Bannister, who in the past has produced many of my albums, and I sat with him for a couple of hours talking about the new directions I wanted to go in. Brown was very gracious. He said, 'If you want to change producers I understand.' But as it turned out, Brown had been feeling the stirrings of renewal too! So we made a pact - change everything."

Everything meant new studios, new musicians and even a new city (Los Angeles) to record in. "It was hard and occasionally terrifying for both of us, particularly for Brown working with engineers he'd never worked with before! But it was a thrilling experience. We'd assembled a team of world class players who'd worked with a large number of star names but who had no knowledge of my music at all. So we started with a blank canvas."

Faced with a bevy of hard nose secular musicians it might have been tempting to play down, to the musos at least, the strong spiritual import of the songs being worked on. But Steven is not a man for such compromise. "We began each session with prayer and the musicians seemed to appreciate that. And the engineer, Trina Shoemaker, who has worked with people like Sheryl Crow, Emmylou Harris and Joe Cocker, was really encouraging. She said the album was one of the most powerful projects she'd ever worked on."

As well as memorable, mighty layered rhythms put together by guitarist Lyle Workman (Sheryl Crow, Lisa Marie Presley), bassist Chris Chaney (Celine Dion, Alanis Morrissette), drummer Matt Chamberlain (Elton John, Faith Hill), guitarist George Cochini (Third Day, Anointed) and keyboardsman Patrick Warren (Jewel, Michelle Branch), the album also contains unexpected backing vocal contributions from Third Day's Mac Powell and Lifehouse's gritty voiced frontman Jason Wade. "I met Jason one day coming out of the studio where we were working. So I asked him if he'd come and sing on my album. It turned out he grew up listening to my music so he came and sang on a track! That was a real thrill."

With such an impressive new album under his belt, no doubt there will be those predicting that this will be the CD which finally sees an artist who's sold a staggering nine million albums to Christians, crossover to sell significant units to non-Christians. But Steven is wise enough not to state a preference for Christian or non-Christian audiences. "I recently returned from China where I played the Hard Rock Caf... in Beijing. Being before an audience who didn't know my songs showed me again that a lot of views we have about 'the Christian marketplace' and 'the non-Christian marketplace' are pretty flawed. There are people and there are songs and if your songs are good enough they'll connect with people. Recently I've been encouraged by Switchfoot who write from a Christian world view in such a way that non-believers connect to the songs. In many ways they're doing what CS Lewis did with literature - presenting a voice to challenge the cloudy thinking of the non-Christian majority. Will I be able to do the same thing? Well, all I can do is make the best art I can and strive to be connected to the source. The rest is in God's hands."