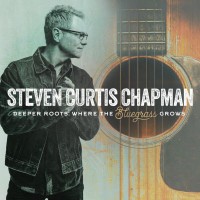 FIVE-TIME GRAMMY winning CCM star Steven Curtis Chapman will release on 22nd March an album, 'Deeper Roots: Where The Bluegrass Grows'. A single from the project, a bluegrass version of one of Chapman's biggest CCM hits "Dive" featuring renowned country star Ricky Skaggs, has been released. The album serves as the sequel to Chapman's 2013 album 'Deep Roots' which was released exclusively through Cracker Barrel and which made number one on Billboard's Bluegrass album charts.