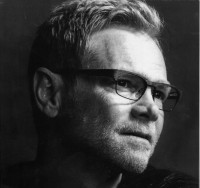 Two things just about every Cross Rhythms reader knows about US CCM star Steven Curtis Chapman is that his albums have won him heaps of awards (58 Dove Awards and 10 Gold or Platinum albums) and that his sumptuous career was blighted with his son accidentally ran over and killed his much loved daughter Maria in his home's driveway in 2008. A year later he and his wife Mary Beth through their charity Show Hope opened a medical care centre, Maria's Big House, in China to provide holistic care to orphans with special needs. Steven's latest album, 2016's 'Worship And Believe', has received accolades and as I have recently read his autobiography Between Heaven & The Real World: My Story (written with Ken Abraham and published by Revell) now seemed a good moment to chat to Christian music's best-selling artist.

Tony: I see from your book that you were raised in Paducah. When I heard country music in the '60s I heard a record by a guy called the Duke of Paducah. I think he was a DJ.

Steven: Yes, I've heard of him. I'm embarrassed to say I don't know a lot about him. I know there was once a country guy who was known as the Duke of Paducah. I think he played on the Grand Ole Opry a few times. In fact, you piqued my interest. I need to do a little research. I'm interested now.

Tony: Records instill bits of information in you for the rest of your life.

Steven: They really do. Songs, music, all of that - it's an amazing thing, it's even part of what I discovered even more writing my book and telling my story. Those little memories, those things stored away, the way music influenced me, impacted me. It can take you back to places you don't even remember you've been. Hearing a song and thinking, 'Wow! I don't remember being at the swimming pool when I was 12 years old. That song!' It's incredible.

Tony: I love telling the stories of musicians, but I'm often bored by publicity-driven interviews with famous musicians. Does it bore you as an interviewee answering the same questions all the time?

Steven: For sure. I appreciate you saying that because I can see how that is the case. Artists who don't do this day in, day out - talking about their latest album - you always hear, 'It's the best record I've ever done.' I've heard myself say it. It's true, because it's the latest thing you've invested your time and energy in; you're inspired somewhere in the process, but how can you stay inspired answering that same question 50 different times? It's going to become a broken record.

Tony: You've no doubt heard this question a few times: Why did you write Between Heaven And The Real World? 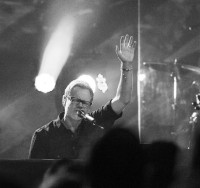 Steven: I have been approached for years about writing a book, and I've always answered, 'Someday I want to do that.' I've had an interesting journey, certainly for a kid from Paducah, Kentucky. I'm not the Duke of Puducah although I am a duke of Paducah, because that's an award they give to people from Paducah who do well. I didn't talk about that in the book, so you're the only person that knows that. I've had a fascinating journey with my music, places it has taken me. My journey of faith has been some mountain tops I never would've imagined, and some very deep valleys I never would've imagined. So I've known for a while that a book was something I would love to do when the time was right, but I was also a bit intimidated by the idea. The more time that passed, the more stories I had and I realised, 'This is going to be hard. How do I do this without it become Lord Of The Rings trilogy? Three books: The Life And Times Of Steven Curtis Chapman.

But three years ago, when I was approached, it was the first time I felt myself wanting to answer, 'I think it's time.' I was coming up on 30 years: there was a milestone on my journey. This year it's 30 years from the release of my first album. Not that there's anything significant about 30 other than it just feels like a place to stop and look back and go, 'Wow! That's been quite a journey.' Knowing that was coming, there was a sense I'm at a place that I feel like I have a perspective on my life, particularly the most recent chapter of my life and family with the loss of our daughter. I knew at some point I would want to sit down and talk about that part of my journey. I've done that a lot in interviews, but you're only able to go so far and so deep, then time's up. You can't go into the detail; and if you do, you don't feel like you're honouring the depth of it: it just doesn't feel appropriate.

One interesting thing that played into it - about seven years ago my wife wrote a book of her journey called Choosing To See, and for the last six or seven years I have had so many people come up - every concert I do - and say, 'Your wife's honesty in her book, to tell the truth, to not sugarcoat it, has meant more to me than any book I've ever read.' Hearing that over and over again is something that compelled me to do this and think, 'There's something so powerful about an honest story: not trying to tell it better than it is, make it sound easier, or put Bible verses on it to say, 'Hey, everything is good because I'm a Christian,' but, 'It's been really hard, and there's a lot of answers I still don't have, but let me tell you my story, what's kept me hopeful, kept me moving forward.' To see the impact of that in people's lives, to hear that, really encouraged me and inspired me to do the same.

Tony: One part of your book that really connected with me and summarised the whole of your story was the sentence, "God is taking all the things, even the unfixable things, and masterly, lovingly, working them together for our good and for his glory."

Steven: One of those questions I get asked in pretty much every interview is, 'What do you want people to be left with when they close the book?' That really is it. The process of telling my story was coming face-to-face with a reality that I already knew about myself and my journey, but I'm really thankful for having the opportunity to do it, because it was very cathartic: it exposed some things even deeper in my own life, particularly this idea of wanting to fix what's broken. Being a fixer and feeling this compelling drive to try to fix all the broken things - obviously that's going to bring a lot of frustration with it. We were made to live in a world that wasn't broken, where things were fixed, but we're living this side of a fall, and the fall means there's lots of things that aren't going to be fixed this side of eternity. What do we do with that? That's been my journey of the struggle of wanting to fix it, being angry and frustrated.

Throughout my journey, what I call the ultimate unfixable of losing our daughter - what do you do with that? There is a day coming when God is going to ultimately finish the process he says he's in now. Can we, by faith, trust that? Can I? That's what my journey has been, and still is today, believing that God, as he has promised, is going to use all of these unfixable things - the valleys, the mountains, every step of it: nothing's going to be wasted - weaving it all together as the master artist only he is, to ultimately create something that is breathtakingly beautiful. We'll stand back and say, 'OK, you really were working all of this together for our good, as you promised, and for your glory.' That takes a lot of faith - more faith on some days than others - but I really do believe that, and that's ultimately why I wanted to share my story.