Tony: Back in July 1990, Cross Rhythms published an article on you and you talked about your first three albums. 'Real Life Conversations' brought comfort and encouragement to a mother who had lost a child through leukaemia, and a wife who had lost her husband through lung disease. I expect getting letters like that means more to you than all the Dove Awards.

Steven: Absolutely. That's what I was referring to with my wife, hearing how encouraging my wife's book was to them. At this point in my journey I have been incredibly blessed, I've received awards and accolades beyond anything I could have imagined - certainly anything beyond what a duke of Paducah thinks he'll receive - but I find myself sharing the stories of people who say, 'Your honesty - that's it.' I love the story of David killing Goliath: that's a great, fist-pumping 'Yeah! Way to go, God!' But for me, far more precious are the stories of David struggling and stumbling and doubting, saying, 'God, how long are you going to forget me?' Or the missteps in David's life, the fact that God didn't edit those out. I find such hope and encouragement in those stories, to know after all that he's the man after God's own heart. That's encouraging to me. People will tell me, 'Your music, your story, has encouraged me to keep going. It saved my heart.' When people say, 'God used you to bring me to faith: it was the first Christian music that got to my heart, and it gave me hope in a pretty desperate place,' for sure, those are the stories that encourage far beyond the awards. They [the awards] feel good for 15 minutes, then the next feeling is, 'How am I going to follow that up? What's the expectation from the record label?' The others are a whole lot more encouraging for a long time, and much more meaningful. 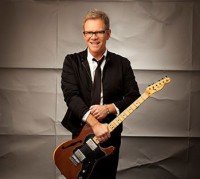 Tony: It felt strange for people over here, distanced from the American CCM scene, how every year they seemed to be handing you more awards.

Steven: It felt strange to many people in the Christian music industry as well. It was interesting to feel both very loved and - I don't want to say 'hated', but there were lots of other people from other labels and other management companies going, 'Oh boy, here we go again!' You've got Gary Chapman, hosting at the time, saying, 'Why don't we change the name of the Doves to the Stevens? Let's call it the Stevie Awards.' I had to endure that for a season. I didn't know what to do with it: I'm feeling it as well. I'm grateful. Someone is voting somewhere - the people that are making the decisions, the members of the Gospel Music Association. Nobody's paying them, at least as far as I know. They're just saying, 'This guy's music is continuing to encourage us. It's relevant and it's fresh and it's changing. It's inspiring us and a lot of other artists.' I hear a lot of artists now that say, 'I was a kid when that was all going on.' Matthew West said, 'I was the kid in Champagne, Illinois, back in the cheap seats, with tears in my eyes watching you and hearing God say, "That's what I want you to do," calling me into ministry.' Or Bart Millard saying, 'I'm pulling my car over hearing "For The Sake Of The Call" on the radio, tears in my eyes, thinking, "That's what I'm going to do; that's what God's calling me to do."' A lot of artists say how my music influenced them. But it was a strange season for sure, people going, 'Can we turn the page?' I'm thankful. All of those have given me a platform to stand on and speak on behalf of orphans around the world, to build an organisation called Show Hope my wife and I were able to start. Much of that's because of the platform those awards gave me. My prayer continues to be, as Paul would say, 'Follow me as I follow Christ.' If I'm put on a platform and given an award, or 40 awards, 'God help me to use to it to continue to point people to the one that is worthy of any praise or accolades.'

Tony: Before I tell you what I think is Steven Curtis Chapman's greatest recording, according to my 1001 best recordings in the history of Christian and gospel music, what do you think is your best work?

Steven: Just one song? That's tricky. As soon as you start to pick one song, they're all there with their hands in the air going, 'Pick me! Pick me!' You pick one and their heads fall in shame. 'I thought I was the favourite.'

Tony: I'd have thought "Spring Is Coming" would've been one of your absolute favourites.

Steven: I think the reason it's a hard question is that there are so many different ways to answer that. The most well-crafted lyrics, poetically, artistically. But when you talked about recordings I thought of the song "Lord Of The Dance" on my 'Signs Of Life' album. Something happened on that record. I dug into my blues background, some of my Paducah roots, deeper into my soul - a guitar riff I hadn't explored before, I put dobro on it, I had fiddle on there. I had the record label mad at me; they were like, 'This will never work at radio.' But I didn't care, because it felt so right, so good and so passionate. The way the recording came together, the musicians that were assembled - I had Gordon Kennedy in the studio who had just written "Change The World" that Eric Clapton would go on to record, a guy named Kenny Greenberg playing guitar, a great musician, has a lot of soul in his playing. I love that you brought "Spring Is Coming" to the table because that is one of the most powerful, emotional songs of hope and pain - it doesn't shy away from any of it - and it's connected so deeply to my family's journey of the last nine years.

Tony: Would you guess that my favourite Steven Curtis Chapman song is "Free" from the 'Signs Of Life' album?

Steven: Yes! I love that you picked that one. I very seldom play that song in concert: one of the challenges of having so many songs. Every time I play it I'm like, 'What? How can I not play this song every concert?' It's a powerful song, a true story. It was a moment in my journey that was profoundly affecting in my life. I love the recording of it, the way it came together, the way it feels. That record, 'Signs Of Life', has some very special moments, and that's one of them for sure. Thank you for picking that one out. I'll probably add that to my set tonight just because you reminded me of it.

Tony: Thank you for sparing the time. I found our chat very un-boring.

Steven: Good! That's exactly what I wanted to hear.