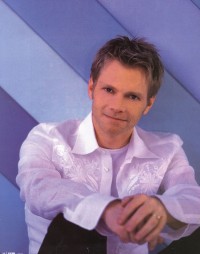 Look at Britain's contemporary Christian music chart and you won't find Steven Curtis Chapman up there with the Martyn Josephs and Marilyn Bakers. He's an American who's yet to visit the UK (though that will change in May '91 when he embarks on a European tour with Michael Card and his three albums have therefore so far received scant notice this side of the pond. In America it's a different story. His musically wistful acoustic ballads and brightly produced pop gospel songs have caught the American imagination like no other newcomer to contemporary Christian music.

Steve now enjoys big album sales, has a record-breaking 10 nominations by the Gospel Music Association and walked off with Dove Awards in five categories. With all this acclaim the Kentucky-born singer/songwriter is still a transparent minister of the gospel. He says "my deepest desire is that 40 years from now, when people have all forgotten the songs, if my kids can stand up and say 'he was a dad that loved the Lord; loved our mom and taught us'...that's what I'd consider having been successful in this life. The real heroes in heaven probably aren't going to have one Dove Award to their name."

Steven was born in November 1962 in Paducah, Kentucky. His parents had made early commitments to Christ but had a "major change in their lives" during a weeklong revival service at the Southern Baptist church the family attended. "I saw that their Christian commitment was genuine and important," Steven remembers "and my other brother, Herb Jr, also accepted Christ. I remember being in church one normal Sunday morning, and just knowing that the Lord was calling me. It was real evident that the Lord was knocking on the door of my heart. I went forward and accepted Christ and it was a very real commitment I was eight years old." Steven's home was a musical one. His father Herbert Snr ran a music store and would often bring over a few friends to play music with him. Folk, bluegrass and country tunes would often roll around the Chapman home 'til the small hours. Steven remembers "Every Friday night, my dad would go play in his band at a local lodge, so my older brother and I would go there with our pillows, and lay down in the back room on the carpet and go to sleep with all this music going on. My dad was a talented singer and player who took music very seriously, and all of my early influence came from my dad teaching me."

Steven enrolled in Georgetown College, a Southern Baptist college in Georgetown, Kentucky, after high school. He enrolled, intending to enter a pre-med programme, primarily due to the influence of family members.

The summer before his freshman year Steven met Danny Daniels, a piano player for Danny Gaither, Bill Gaither's brother, while working in an Opryland summer show. Steven and his brother Herb became fast friends with Danny, and soon the trio was getting together on weekends to rehearse. After one semester at Georgetown, Steven transferred to Anderson College, changing his major to music business.

"I cried, played, and sweated over the decisions I had to make," Steven now says. "But finally, I was learning something I actually wanted to learn and I was growing spiritually! It was so evident God had directed the move."

He continued to write, and soon his songs were in demand by people like The Imperials and Sandi Patti.

After another summer working at Opryland and writing songs, Steven moved permanently to Nashville, transferring again to Belmont College. He married his college sweetheart, Mary Beth, in October 1984, attended Belmont, and continued to write songs. By 1986 he had signed an exclusive publishing and recording agreement with Sparrow Records and became a father (daughter Emily). When his first Sparrow album 'First Hand' appeared in 1987 he was ready.

Steven's album debut met with immediate recognition, Karl Markin writing in 'Bread' magazine wrote. "On 'First Hand' Steven Curtis Chapman shows that he knows it's not always easy to be the Church kid. Chapman emphasizes what we all know; even if you were raised in a Christian home, you have to make your faith your own...Chapman's voice is distinctive and able to handle the various styles well. The up-tempo 'Tell Me' and the ballads 'Who Cares' and 'My Redeemer Is Faithful And True' are my favourites. The strongest aspect of Chapman's art is certainly his songwriting. His lyrics are thoughtful and full of compassion. I'd give 'First Hand' an enthusiastic thumbs up."

Steven himself comments "The album's success did not really surprise me, and I say that with all humility," he explains. "I felt like God had been so intimately involved with doing what I was doing! I had taken so I counsel with people like (producer Greg Nelson, who is a very godly man, and Bill Gaither, and God's hand was in everything from the songwriting to the song selection. But things like the single 'Weak Day's' going to number two did surprise me, because I didn't even understand how that whole process worked." The process involved coast-to-coast touring to follow through the radio plays. What captivated audiences was both his folksy down-to-earth humour and a transparent vulnerability which askewed big showbiz elements. He comments, "I'm not afraid to say I'm hurting. I remember one night I was on the road with White Heart, and had my bag stolen with all the money from album sales the night before, my clothes, everything. I ran out on stage, went through about two songs, and stopped. I told the audience what had happened, and told them I needed to pray with them and let them know why I was a little long-faced." 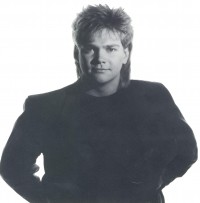 In 1988 Steven's second album 'Real Life Conversations' broke through to an even larger Christian music audience. Haunting, acoustic ballads like "Your Love Is Perfect", percussive throbbing rock like "Faithful Too" and hook-filled mid-tempo numbers like "Tuesday's Child" all exuded class while his lyrics reached places few other songwriters seemed able to. Steven comments about his songwriting: "I'm not nearly as studied theologically as I should be. I write and sing songs, and talk about things that people can quickly latch on to. I've had people say to me, 'Thanks for writing that song; that's exactly what I've wanted to say for years but haven't been able to'.

"They've been able to hear something that makes it memorable to them. It's not just a song with a good musical hook and a catchy phrase; it's something that they can make their own. I think I've been able to hit that with people. I've had a lot of people come up to me after concerts and tell me that they feel I'm the sort of person they can talk to; that there's no kind of 'star' thing. When I'm on stage, I really do feel that we're a family and I can share honestly with the audience. There have been nights where I've said, 'I've been struggling lately about this; can we just stop and pray?' I'm just trying to be honest."

Steven's third album 'More To Life' again has a supernatural ability to address the concerns and attitudes of many, many Christians. 'In This Little Room' expresses the heartfelt desire Steven has to identify with his audience: "I put my pen to paper/to write what's in my heart down on a page/with every line, a silent prayer is being lifted/that the song will somehow find its way/from this little room to you.

Apparently the songs have found their way from that 'little room' to countless hearts. Something is striking a chord with people and they're writing Steven about it. Recently he received a letter from a man who was literally en route to an extra-marital affair, who turned on the radio in his car, only to hear "Strolling past temptation avenue/you hear so many voices calling you/maybe you'll step in and take a quick look around/try to walk through it/and you're gonna fall down/ you've got to run away/turn around and run the other way/don't even look in the direction of a thought you should not enter in" ("Run Away" from Steven's 'First Hand' album) Needless to say, the man was writing to thank Steven for reaching into his heart and being the vehicle through which God turned his life around.