Steven Curtis Chapman: The US CCM star with a Christmas album

Likely to be the biggest selling Christmas album, at least in the States, is the new one from STEVEN CURTIS CHAPMAN. The CCM star spoke to Jan Willem Vink. 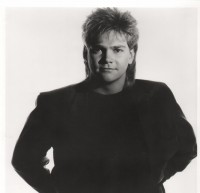 Steven Curtis Chapman, Michael W Smith and Carman. Each one of them has sold literally millions of albums, won numerous awards and has impacted Christian music in different sorts of ways. Now with a brand new album 'The Music Of Christmas' guaranteed to be a huge seller this yuletide, Steven continues his spectacular sales surge. Ever since his first album 'First Hand' was released in 1987, Steven Curtis has found in the US a huge Christian fan base, in part due to his boyish ideal-son-in-law looks, but more to do with his wily way with a song hook, turning out endless finely crafted songs of faith.

Albums like 'For The Sake Of The Call' and 'The Great Adventure' have sold in excess of 500,000 copies each. Steven showed no attempts at crossover however as his songs deal with discipleship, the cost of commitment and the hope we can find through faith in Jesus Christ.

"'For The Sake Of The Call' came out of my studying the works of Dietrich Bonhoeffer, especially The Cost Of Discipleship," comments Chapman. "It chronicled my moving from questioning the tenets of my faith to having that foundation re-established, to 'What do I do with this? How do I put it into motion? What does it mean to call that a Christian lifestyle?' It was then that I realised that the Bible only has a few references to the word 'Christian', but tons for the word 'disciple'."

One of the standout tracks was "Remember Your Chains", serving as a reminder for each Christian to not pride ourselves in where we are now, but instead exhorting us to remember the place we were in when Jesus Christ saved us. Steven Curtis wrote that song when he observed a prisoner who was transported to another prison on the same airplane he was on for three hours. Steven: "I watched him. It was a three hour flight and we were together and I kept looking back and he was staring out the window and I really tell the story in the song, and as I sat there and watched him I began to realise that I've never been in that position in a spiritual sense and a very real sense I have been a prisoner to sin and God has set me free from that and I never want to forget those chains, because when we do, we begin to think we deserve this and we begin to think, 'I'm a good guy' and we need to remember where we would be without the grace of God. So that's really what birthed that song."

"Remember Your Chains" got new significance as Steven Curtis Chapman became spokesperson for Prison Fellowship Ministries, an organisation founded by Charles Colson, who was involved in the Watergate scandal, was himself imprisoned and found faith in prison. "Remember Your Chains" became the theme song for Prison Fellowship Ministries and Steven not only began to promote the work of this ministry on stage but could also be found visiting inmates on death row with Charles Colson.

Comments Steven: "You know, when I first walked in to the first prison, I told Mr Colson that I felt I was the wrong guy for the job. I've never been arrested, I've never been in trouble like this, how would these guys relate to me? Even when I stood in front of them, I definitely felt what Paul felt when he wrote in the Bible, 'I came to you with fear and trembling.' I have definitely felt that every time. And that's part of the reason I do it. Even here, with an audience that I didn't expect to know my music; I'm received in a wonderful way, I felt very welcome with friends again. But in a prison, these guys have nowhere to go, they're there because there's nothing better to do, not because they like you or they want to hear what you have to say. But every time I've walked away from those experiences God has reminded me that even when I'm standing on a stage that it is his power at work through me that accomplishes anything worthwhile. It's not what I can do, it's not my music, it is the Spirit of God, it is the power of God, it's what Paul said in the scriptures. What made the difference was the power of God being revealed, not my eloquent speech or my wonderful words. That's what I have experienced every time I've gone into the prisons."

Steven Curtis Chapman is no doubt perceived in a different way in front of inmates in comparison with thousands of screaming fans. Comments Chapman: "I go in there for one reason, I tell the guys as soon as I go in, 'You may look at me and wonder why is this guy here. I can go and do concerts and have lots of people that really appreciate and know why I do what I do. I come here because I want to be obedient first of all to God and Jesus is in this prison, with you. I've come here because Jesus is here and he's brought me here to tell you that he loves you and cares for you.' And I think that is an important part of my ministry, just as standing on a stage for 25,000 people, reminding them of the same things I tell those guys there. Reminding myself every time that none of us deserves God's forgiveness, but he's offered it for all of us."

A new chapter in Steven Curtis' career is the release of The Music Of Christmas'. Recording this album in April gave his family some disorientation problems... Laughs Steven, "It's very confusing. My children are very confused. Their favourite Christmas song is 'Angels We Have Heard On High', so they were walking around singing 'Gloria' and all the kids at school were going, 'Why are you singing that? It's April, not Christmas.' They don't know the difference; they think it's Christmas time around our house. It's been a little confusing."

Half of the tracks on The Music Of Christmas' are original songs. "Everything on there for the most part is really a spiritual message of Christmas. There're a couple of instrumentals on the record because I've always wanted to do that but never had a chance. So I did one arrangement of 'Carol Of The Bells' which is not a spiritual song, but just an instrumental on the album. Of the six songs that are traditional carols, some people will know them; some I wrote new music to. Most of it is kind of new, but it has got some familiar elements to them. Because that's what a lot of people want to hear at Christmas time - things that they know."

It seems like every American artist records a Christmas album somewhere in their career. Was The Music Of Christmas' an album Steven's record company Sparrow wanted him to record? "Oh no. I wanted to do it two years ago. I started writing songs for it and I just didn't have time to do it. We ended up doing The Great Adventure'. I wanted to do a Christmas album for a long time. The record company said that if I really wanted to do it, they'll do it. They wanted me to do another regular studio album instead. I told them I really felt this was the thing I needed to do next for a couple of reasons. I felt it was too soon to write another full album. Every album for me is a pretty thematic process. I pray about and read and study and research and try to come up with one theme that runs through the whole album, like 'Heaven In The Real World' or The Great Adventure' or discipleship on 'For The Sake Of The Call'. And that runs through the whole record. There's usually a moment when that happens. I was reading Dietrich Bonhoeffer's The Cost Of Discipleship and that's what really inspired 'For The Sake Of The Call'. A Time Magazine article inspired 'Heaven In The Real World'. So the record company came to me and said, 'We want another album on this day,' and I said, 'You know, that's the first time I felt this, but I feel like you're forcing something that is not coming from my heart, that would be a mistake to do that.' They said, 'Okay, from our business standpoint it would be great to have it.' I thought about it and said, 'I would love to do a Christmas album, I've wanted to do it for a long time.'"

The Music Of Christmas' is definitely a Christ-centred album, as it focuses on Emanuel, God with us. Steven: "I think a lot of time Christmas music and the Christmas season is thought of as strictly happy families getting together, it's a wonderful fun, happy time. And yet all of us know the first Christmas without someone, a grandparent or mom or dad or husband or sister or wife that passed away. The first Christmas without them can be a very painful lonely time for so many people. Suicide rates soar around that time of the year because people are so depressed. Sometimes we never acknowledge that.

"It's almost a continuation of 'Heaven In The Real World', it's saying there is hope and that whole season is more than jingle bells and snow and Santa Claus, it's the celebration of the fact that God came to earth in the form of the baby and grew into a man, who gave his life, so that we can have life. So that's what Christmas really means, and I'm by no means the first one to say that or write songs about that, but just felt like I wanted to add my two cents worth into that, so that's what this album is really all about."

Those ideas are expressed in "Our God Is With Us", which Steven co-wrote with Michael W Smith, and which according to Steven sums up the whole album. "Musically, it's very much kind of a culmination of all my albums," comments Steven. It's obviously more on the sweet side, I didn't get up and rock as much, it didn't make sense to do that. Although for a Christmas album it did have some moments, more energetic than most Christmas albums are. That's one of the things that sometimes bothers me about Christmas music, is that it gets so nostalgic and melancholy that everybody is sitting around the fire with a cup of cider and I'm thinking, 'We should be celebrating and getting crazy, this is the birth of our Saviour.' So I really wanted it to be a celebration as well. I think adding the London Symphony on this record gave a unique element that has never been there before."