T-Bone: The Redeemed Hoodlum now an up and coming Christian rapper

He came to Greenbelt unheralded and unknown and in one impactful weekend rapped his way into the hearts of the Deene Park throng. Marie-Louise Flint spoke to Rican rapper T-BONE. 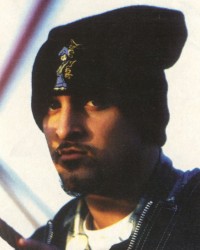 Wherever he goes, whatever he does, T-Bone makes an impact. In the record industry he is making an impact with his debut in-your-face hardcore gospel rap album produced by the LA Posse who usually exercise their sampling magic for hitmakers like Ice Cube, LL Cool J and Ice-T. At Greenbelt T-Bone makes an impact taking a hastily arranged, not-in-the-programme Mainstage mini-set slamming it home to the 10,000 throng impatiently awaiting DC Talk, leaving them dazed, dancing and baying for more. And above all on the streets of San Francisco T-Bone makes an impact with the gospel of Jesus Christ. This extraordinary 20 year old is no street cred escapee, coming on with gangsta rap from the safety of recording studio and 5 star hotel. T-Bone is a missionary for Jesus, walking ghetto streets where you can get blown away for the price of a paper twist of crack and where moving one block in the wrong direction without the right 'colours' would bring instant death. With a Bible in his hand and a rhyme-busting message on his lips, T-Bone has earned the respect of the gangs on the San Francisco mean streets where he lives and ministers. Now, unexpectedly, he's earning the respect of rap fans everywhere (though sadly T-Bone's 'Redeemed Hoodlum' on Metro One Records is unreleased in Europe).

T-Bone is the son of a pastor in an area of San Francisco where street violence gang warfare, drugs and prostitution are a way of life. T-Bone described the situation to America's CCM magazine: "Everything's divided into sections: The Blacks have their side of town - Hunter's Point. The Latinos have the Mission district, and all the gays have theirs. And here, in the Mission, every street corner you walk down, there's a different gang with a different colour. It's real wild, and it's real crazy and it's getting worse every day."

Since the age of eight T-Bone has been rapping on the streets. His bilingual heritage gives his raps a dynamic sound to which all gangs can relate. "My dad's from Nicaragua and my mum's from El Salvador. I've been speaking Spanish all my life," T-Bone explains. T-Bone has the added advantage of having a lifetime of musical education from inside the church which adds a further twist to the sounds he has learnt from the streets. T-Bone describes some of this background: "I played the drums, then I started playing the piano and then I directed the church choir."

With such a cultural background church worship must enter a realm of experience that is hard for us to imagine in the West. T-Bone describes this, "We reach out more to the Latino community. If you walk in our church, we play like Christian salsa music. Americans go in there just to check it out." Although T-Bone has grown up in the security of the church, he himself has struggled to be in the world but not of it. For a short time he fell prey to the pressures of gang life. His new album 'Redeemed Hoodlum' is about this. "I started to get into all that when I was around 16," says T-Bone. "I chose to go my own way. I was always with my friends and we'd be jumping people. I always knew what was right and what was wrong because I was brought up in the Word, but I chose to reject it for a while."

Some of this rejection came from the pressure T-Bone felt in being a pastor's kid. "Everyone looked at me like I had to be perfect. Everyone in the church is just looking at you, waiting for you to do something wrong."

This time of rejection was by the grace of God not long lasting. A revival at his father's church brought T-Bone to his knees. He describes the day: "They invited different speakers from Nicaragua, Argentina and other Latin countries that were really anointed. And I really listened to the Word. When it came for the altar call, I just walked up and they prayed for me. I just started crying and the Holy Spirit came into my heart." The transformation of his heart that took place is now reproduced in others through the power of his ministry. "I have a bag right here full of rags from gang members. We just did a two month tour where we were hitting all the inner cities. And it's just a trip to see how many hurting people there are out there. The responses are just amazing. Big old huge gangster guys with tattoos all over their bodies come up with the rags in their hands crying and we pray with them. We've had prostitutes come, girls that want to commit suicide, pimps, I mean everything. We've had policemen saved at our shows."

T-Bone is well respected on the streets through the whole of America. His young age, cultural background and experience of inner city life immediately breaks down any barriers between him and his audience, which enable him to sing openly to gang members about their way of life and the hope that can be found in Jesus Christ. T-Bone describes the importance of this: "They need to hear it from somebody they can relate to. I know that when I was in school the teachers would tell me all that and I didn't even listen to 'em. It's different when you come at them with the kind of music that they like. And when they see that you're a young person like them and you're out of trouble, you're not drinking and not smoking, I feel like they respect you more."

T-Bone no longer has any fear about singing on the streets, as he explains, "I don't have any fear anymore because I know if I die I'm going to a better place to be with the Lord Jesus in Heaven." This knowledge gives him the freedom to speak of the truth that youngsters need to hear. "All of my stuff is directed towards the gang member, the drug addict, the pimp, the prostitute, or whatever," says T-Bone. "And I rap my message and talk to the kids about staying in school, and not dropping out, (and tell them) don't drink, don't drop out. I think it's something kids really need to hear."

The enthusiastic response to T-Bone's album throughout America, both secular and Christian, is heartening. T-Bone even prays openly at the end of the tape for the Holy Spirit to touch the gang members! Let's hope the album is available in the UK soon.

The opinions expressed in this article are not necessarily those held by Cross Rhythms. Any expressed views were accurate at the time of publishing but may or may not reflect the views of the individuals concerned at a later date.
About Marie-Louise Flint
Marie-Louise Flint is a Cross Rhythms editorial assistant currently living in Tavistock, Devon.

For more on T-Bone visit the T-Bone artist profile