Tenth Avenue North: Reminding the Church that we should be followers 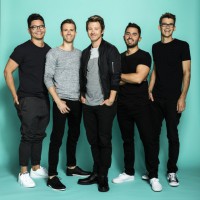 For most outside the Church, and sadly sometimes even for some within it, the world of Nashville CCM, if considered at all, is a sad derivative and in terms of the broader pop and rock music culture, an irrelevant entity. Yet for tens of thousands of people - Californian soccer mums and Kazakhstan youth workers, young festival-goers and old CCM historians alike - contemporary Christian music is a God-breathed vehicle which feeds, encourages, heals and empowers thousands of believers as they seek to live out their faith. Florida's Tenth Avenue North are an unashamed CCM ministry band. Their pop rock music is not the coolest music around. It's not even the most adventurous music heard on the rigidly formatted structures of US Christian radio. But it is music which, as their albums like 'Over And Underneath' (2008), 'The Light Meets The Dark' (2010), 'The Struggle' (2010) and 'Cathedrals' (2012) have demonstrated, contains lyrics that go much deeper, and achieve much more, than the ear candy snacks of most pop radio entertainment.

Tenth Avenue North are resolutely focussed on ministering the Word in song and their radio hits like 2008's "By Your Side" and 2014's "Closer" have stirred the hearts of Christian radio listeners around the world. Now their album 'Followers', to be released through the Provident Music Group on 14th October, seems destined to continue their aim. The band see the release of 'Followers' as a fresh start for the quintet. Said lead singer Mike Donehey, "To begin a season, another season has to die. I think this is a fresh season because I finally let a lot of my dreams die." The singer admitted his aspirations revolved around his music career for years, which caused his self-worth to rise and fall with the band's success. "I think with this record, I started to realise how a lot of my dreams weren't big enough and that they were very much mine - like getting signed, getting played on the radio. Those aren't the kind of dreams that will satisfy your heart. If our hearts are made for a new kingdom - a new heaven and a new earth - if that's what the bent of our souls is, then these little man-made dreams aren't ever going to be enough." In the middle of attempting to reconcile his calling with the trajectory of Tenth Avenue North's successful CCM career, Donehey uncovered this nugget of infinite wisdom: "God's not as interested in the success of our career as he is the posture of our hearts. The whole theme of the record comes from believing that God's will for my life isn't a plan, and it's not necessarily a dream. God's plan for my life is the position of my heart."

Donehey, on the EDM-tinged song "What You Want" (the album's latest single), pondered the modern Church's obsession with leaders. "When you look in Scripture, you don't ever see Jesus ask anyone to be a leader - never. Jesus said, 'I don't do anything of my own accord.' He basically said, 'I'm not a leader; I only do what the Father in heaven tells me to do.' So Jesus viewed himself as a follower. If Jesus viewed himself as a follower, then no matter what anyone else thinks of me, that's how I need to view myself before God."

Heading into the studio with producers John Fields (Switchfoot), Jason Ingram (Chris Tomlin), Paul Mabury (Lauren Daigle) and Colby Wedgeworth (Jordan Feliz), Tenth Avenue North crafted songs like the synth-soaked "Afraid". Guitarist Jeff Owen originally began the song and played it for Donehey the day following the Paris attacks in November 2015. With the people of France in the back of their minds, the band finished the song with a message relevantly speaking faith over fear.

Donehey spoke about the deliverance from fear available to followers, "My treasure is not my life. As soon as you let go of your life as the treasure, then suddenly you find freedom. Someone who's lost the fear of death is an insanely free person. I don't have to be afraid because fear, not only is it time wasted, but fear is the belief that God's not going to get it right." The passionately tender ballad "I Have This Hope" was born of a time of personal uncertainty in Owen's life when his sister-in-law was suddenly diagnosed with stage four cancer, and he walked into a writing session with a heavy heart. The 32-year-old mother of three began chemo treatments in early February of 2016 just as the band first began writing for 'Followers'. Rooted in Isaiah 43, the song was penned in her honour. Observed Donehey, "For the most part, the things I see in Scripture are really not this promise of this plan working out a certain way, but it's the promise of his presence with us through whatever happens. God doesn't say, 'You will be spared of tragedy.' He says, 'Tragedy won't crush you; it won't overwhelm you; it won't consume you. I am with you.'" Two-and-a-half months later, when Tenth entered the studio to record the song, Owen's brother and sister-in-law stopped by following a doctor's appointment at Vanderbilt University. Miraculously, while his sister-in-law was sitting on the couch in the studio, she received a call from the doctor telling her that her cancer was in remission.

Another song on 'Followers' is "Sparrow (Under Heaven's Eyes)", which explores humanity's need to feel significant. It was written by Donehey with Jonathan Smith. The two songwriters started listening to "Between Me And You", a poignant song by The Killers' Brandon Flowers, and began to see their stories mirrored in the lyrics. Said Donehey, "It just captures the struggle of wanting to live your dreams but also not wanting to let your ambition get in the way of loving your family well. So many men have sacrificed their family or their marriages on the altar of ambition." Often fearing he sacrifices his own family at times for the sake of his calling, it was a song Donehey could identify with, and he found himself praying, "I'm ready to give up all my ambition and all my dreams if, God, you could just remind me that you see me." "Sparrow (Under Heaven's Eyes)" is the manifestation of the band coming to grips with letting go of their dreams, their plans and their aspirations and putting everything in the hands of the God who cares for them individually infinitely more than the birds of the field. Said Donehey, "God's working on me to let go of this need to have the plan, this need to have the answer. Basically, way more important than knowing a 10-year plan from God is just knowing that I'm living a perpetual 'yes' to him.

As a follower of Tenth Avenue North from the beginning, (their cds are most prevalently played in my car), I am struck with how daily we as Christians need to say, "Not my will, but Thine be done". Not my dream, but Thine in me. And another reminder, let go and let God. Thanks for a great article!

I appreciate you sharing how God is manifesting Himself in your life. Living for our dreams is truly a work of satan, and his goal to destroy our relationship with Christ. I'm finding myself broken going to thru the trials of life. Pursuing "the all mighty dollar", sacrificing my marriage, my family,,,,
Thru the brokenness, God has restored me with His love and grace. The trials are many, but He sustains me and has promised me a better life if I trust in Him. Everyday I see God's hand working, moving and providing as I am on dialysis waiting for a kidney.
God is faithful and am grateful that He reigns.