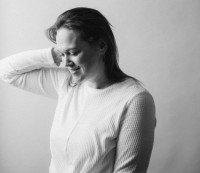 The singer/songwriter Teressa Mahoney, from Colorado, recently delivered Cross Rhythms radio with a powerful song, "Kairos". It comes from Teressa's mini-album 'Beyond', issued independently in March this year. She spoke about the background to her radio hit. "I noticed that sometimes when I'm playing music, I lose time. I experience time in a different way than in regular life. I was curious about that and I was having a discussion with one of my friends about it - trying to describe it to her and feeling kind of awkward and strange to have such experiences and be speaking about them. She immediately replied, 'Oh, you're talking about kairos time'; it was an idea that wasn't new for her. She explained about the different Greek words for time - kronos and kairos - and I just was fascinated with that idea and leaning in towards having experiences like that where you almost feel like you're touching something that's outside of our perception. That's why I wrote 'Kairos'."

Teressa was born in Chicago but her parents moved a lot before finally settling in Colorado. Her father was a petroleum engineer. Her parents had met at Bible College so there was considerable religious teaching for her and her two brothers. She admitted, "I don't think they got everything right, I don't think anyone does, but I really appreciate the way that they sort of instructed me."

She remembered, "At four years old, I decided that what I wanted to do was be a singer." By age 18, this strikingly attractive young lady went off to New York to pursue a career in music. Said Teressa, "I was 18 and had stars in my eyes. I moved to New York with the idea of becoming a famous singer. The man who made my demo tape at that time, he said 'you have to write a song, just write a song', and I'm really, really glad that song never saw the light of day because it was so, so terrible. I just didn't have anything to say."

Not surprisingly, the demo opened no doors at all. She said, "I just came back home to Colorado with my tail between my legs and decided to grow up and start a real life and I finished college and became a teacher. I taught school for a few years. I taught French and reading to middle schoolers and then my husband and I started a family so now we have four kids. They are 17, 15, nine and seven. Three boys and one girl."

In 2017, Teressa belatedly began her recording career. She explained, "My very favourite singer/songwriter is Andrew Peterson. I looked up who his producer was and I contacted him, Ben Shive, but he was not available to work with me. He recommended a couple of people who he had been working with, and from those recommendations I selected a man named Ryan Corn who is also a recording artist and he was the producer for 'Made New'. We did pre-production over email for several months and then I went to Nashville for a week. We had studio days and the musicians recorded their part and we did vocals for several days and he mixed it all and then we sent it out to be mastered. There's a local station in Colorado who's great for indie artists; it's called Tri-Lakes Radio and they played some of the songs. In fact, one of the songs, 'Glimpses And Shards', hit number one on their countdown from local artists."

As well as featuring her radio hit "Kairos", Teressa's mini-album 'Beyond' featured a song based on Psalm 23, "Restore". Said the singer, "That's the song which has got the most plays on Spotify. Psalm 23 was the one I memorised as a child, and I was having a conversation with one of my friends at church who's in the band with me, and he said that he had been trying to pray things to God, like having a personal worship time where he was praying things but singing them as he prayed and he said try doing that with Scripture. I was fascinated and intrigued by that idea. So I thought, 'what's the longest Scripture that would last me a while that I could pray' and that was the first passage that came to my mind."

The batch of songs which Teressa's currently working on could well be her most important so far. She said, "I think the Church is placed for a revolution as far as in terms of thought. I think we've succumbed to false teachings." When I suggested that too much of the American church had effectively become the Republican Party in prayer, her response was immediate. "I so agree with you on that point. My next EP is going to be focussed on deconstruction, and then another EP that's focussed on reconstruction, and just all the feelings and all the thoughts that are interwoven with Scripture. I'm really excited about how it's going to turn out. I have so much more writing to do."

Clearly, discerning Cross Rhythms radio listeners will be encountering more of Teressa's thought-provoking music in the months and years ahead.