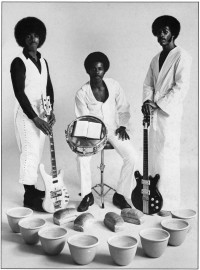 This month's issue of Record Collector magazine runs a five-page article on an early '70s Detroit rock band with a name that turned out to be particularly off-putting to Joe Public. The band were called Death. They were an oddball team, three brothers with a black Pentecostal preacher father, whose appearance - Afros and flares - made them look like a psychedelic soul group but whose raw rock-driven Hendrix-style guitar was something that morphed into America's emerging punk rock sounds. As music historian Kris Needs wrote, "While the Ramones were still developing their dumbed-down buzzsaw blueprints in Queens, these three actual brothers from Detroit's infinitely tougher East Side had already tried infiltrating the US music business with a much fiercer strain of modern punk. But David, Bobby and Dannis Hackney called their band Death and stubbornly refused to change it, even when the man asking was music mogul Clive Davis brandishing a major label deal. By punk's inaugural year of 1976, Death were already doomed by their name, releasing just one impossibly-rare single during their first brief lifetime."

Death's story gets stranger. Over 30 years later, that collector's item 45 eventually led to Chicago's Drag City Records releasing Death's album '. . .For All The Whole World To See' followed by further archival excavations and new recordings. And through that the three brothers amazingly found an enthusiastic audience for their incendiary proto-punk music. Now Drag City have re-issued an album that throws light on another part of Death's history. In 1980 the band, having relocated to New England, came up with a new name, The 4th Movement. If possible, it was even more radical than their work as Death because now the band expounded a strong Christian faith in their music. The self-financed, self-titled album got zero response from the record companies and with the last of their money the trio financed a private pressing of 1000 copies, most of which were never sold and disappeared in a house fire.

As it turned out, the 'The 4th Movement' album became almost as sought-after as Death's proto-punk single "Politicians In My Eyes/Keep On Knocking" (which has fetched Â£750 on Discogs). It was Jesus music archivist Ken Scott who was the first journo to write about 'The 4th Movement' in his book Archivist 4th Edition: Vintage Vinyl Jesus Music 1965-1980. Scott wrote, "As Darth Vader might say: 'The fuzz is strong on this one'. Monster homemade LP from three black brothers with eyes set back 10 years toward heavy bluesy fuzzed-out Hendrix sounds. With Bobby Hackney on bass and lead vocals, Dannis Hackney on drums and David Hackney tearin' away on lead guitar, this is heavy classic rock that kicks bigtime, but not at the expense of melody and texture as the soulful tracks that fill out side two attest. Lots of distortion and whammy bar on the leads and frequently layered with a hazy rhythm guitar wall of sound. 'Revelation's Eve', 'Always At Your Door', 'He Even Reigns Today', 'The Christ In You', 'Key To Paradise' and 'Jesus (Please Come)' are some of the titles. Phasing is used on 'Life Without End' - a hushed dreamy psych gem that effortlessly carries you into the ethereals. Play at maximum volume."

Cross Rhythms spoke to Bobby about the band's change from being often vilified and ignored rock trio Death to The 4th Movement. He said, "I think that it wasn't really we had decided to be spiritual at that time but I remember the conversation that David and I had. It was more or less David who directed us and said our songs always have to say something. I think that was the beginning of the door. . . when you're a poet or a songwriter or a group and you want to express something, usually what is there really to express? I mean we express about love, we express about sex, we express about getting high, we express about having a good time, usually all those things are going to lead to where eventually where do you stand in this whole scheme of things? That was the meat that we started to put in between the bread that made the sandwich of what we were doing. Yeah, we wanted to be a rock 'n' roll band but always wanted to say something, I think that was the doorway that led to that spiritual inspiration."

Said Dannis, "Our background was that of preacher's sons. He really made sure that we knew the Scripture. That's always been in our background. If we were writing songs or doing whatever, there would always be something, the belief would always be there. Elvis was once the biggest artist in the world and even he recorded a gospel album. That set an example for us who came along later. We didn't want to be scared when recording a gospel album because we weren't the first ones, people like Bob Dylan before us had already done it."

As it turned out, though, The 4th Movement's album sold only a miniscule number compared with the gospel rock classic of 1979, Bob Dylan's 'Slow Train Coming'. Bobby spoke about Joe Public's apathy towards 'The 4th Movement'. "What kept us strong was that we were a family. The word of God says it's better for two to be together, because if one falls down then the other can help them up. So we kind of encouraged each other during the '60s and the '70s. We would always have the ability to lift each other up and advise each other, point out the way when we see one of us kind of going in the wrong direction. That's one thing that a brother or family group has."

In 1982 The 4th Movement released a second Jesus rock album, 'Totally', adding some summery jazz rock and a touch of funk to their repertoire. A powerful song about Jesus' return, "Return Of The King", alongside such telling compositions as "A Million Miracles" and "The Son" and some lavish gatefold packaging didn't stop that album, too, selling poorly. The brothers told Record Collector magazine, "With Death people liked the music but didn't like the name. With The 4th Movement people didn't mind the name and liked the music but didn't like the words! We got a whole lot of flak: 'It's great rock'n'roll but hold the religion'."

Bobby told Cross Rhythms, "David kind of got fed up with the whole thing and he wanted to go back to Detroit and start a whole new musical experience there. He wanted to take us with him. The only problem was that we all had begun to start families and it isn't so easy to just pack up our families and go across the country. David went back to Detroit and for almost three years we could not find another guitar player to replace him. So we just practised the Death stuff and the 4th Movement stuff as just a bass and drum unit. It got to the point where me and Dennis were like, 'We need to do something'. David wasn't coming back to live and we couldn't go back to Detroit to live. I got into a situation as a disk jockey and we got connected with some people who were promoting reggae music and they happened to be bringing Bob Marley and Peter Tosh to town and we got to meet those people and see those shows. We saw this Sly & Robbie show, there was this Black Uhuru show where they got stopped at the border for various reasons and all of the singers couldn't make it, and Sly & Robbie had to perform without Black Uhuru. So they just did the whole dub show and every time they went bass and drums the crowd would go crazy. Me and Dannis were on the side of the stage looking at each other going, 'Hey that's all we've got, bass and drums and these kids are going crazy over it'. So we started Lambsbread. It was a good choice that we made because the town of Burlington was hungry for a reggae band. We were almost an instant hit straight from the beginning, so we stuck with that for 21 years."

Lambsbread proved to be very popular with the student audience and went on to record eight albums. Then, in 2008, largely thanks to the archivist work of Drag City Records coupled with the interest of Bobby's skate-boarding son Bobby Jr, who along with siblings Orian and Julian, started playing old Death songs in their band Rough Frances. By 2009, Drag City had released Death's 'For The Whole World To See' album, which received accolades in the New York Times. Death reformed with Lambsbread guitarist Bobbie Duncan filling in for David, who tragically succumbed to lung cancer in 2000 at the age of 48.

The album that followed, 2011's 'Spiritual-Mental-Physical', was a collection of raw 1974-1976 garage demos and outtakes that Bobby had kept in his attic after David gave them to him. Even more enthusiastically received was 'Death III', where David's Hendrix-style solos left even the most demanding rock guitar buffs open-mouthed in wonder.

Bobby summed up, "You know when we were doing the Death stuff that was in Detroit. David tried to book us up at a black audience cabaret where there was all these kinds of people that would go to church on Sunday, but they were factory workers who brought their own bottles. The cabarets usually had a blues band or a soul band. We opened for a soul band and we came out with our rock 'n' roll stuff, and the only reaction they gave was whenever we hit a rock 'n' roll crescendo at the end of a song, you could hear a pin drop - and the place was packed. They would just look at us and finally one old guy came sauntered up and said, 'You're too loud!' and then went back to his seat. That's the reaction we got because we were Death. After we relocated to New England and became The 4th Movement there was a different response. Then, it was the white church of New England that sent us packing. They were, like, mostly Catholics and they weren't into rock. And the non-churchgoers, they were like, 'Great rock 'n' roll music, just change the words'. Maybe today those divisions - black or white, Christian or non-Christian - are starting to fall away. Dannis and I are hoping the re-release of 'The 4th Movement' will bring down some more of those barriers."