The Blackwood Brothers Quartet: A new name in an old history

The word longevity takes on a whole new meaning when one considers The Blackwood Brothers Quartet. These icons of Southern gospel music began, staggeringly, in 1934 and the bald facts about their impact on generations of church goers is beyond estimation - they have recorded over 200 albums, they've won nine Grammy Awards and been inducted in the Grammy Hall of Fame, The Gospel Music Hall of Fame, the Memphis Music Hall of Fame and even The Rockabilly Hall Of Fame. Started by Roy Blackwood in 1934 at the last count they've had 12 bass singers, 18 tenor singers, six baritones and until recently 15 lead singers pass through their ranks. Now it's 16. For the group and Daywind Records have just announced that Jonathan Mattingly is the Blackwood Brothers new lead vocalist replacing Michael Helwig who had been with the group since 2012 (save for 2016 when Jimmy Blackwood had his third sojourn with the group). How Jonathan Mattingly should come to add his name to one of Southern gospel's proudest institutions is particular intriguing.

Jonathan's family has travelled in music ministry for many years and live in Moody, Missouri. After much prayer, Jonathan and his wife, Sarah, felt that the Lord was directing them to leave the family group in which he had grown up and move to Nashville. It was a big risk. He had no promise of employment and Sarah was pregnant with their first child. But they obeyed what they discerned as God's direction and moved the first week of April of this year.

Jonathan was unaware but that week the Blackwood Brothers were holding auditions for a new lead singer. The group happened to hear about Jonathan from good friends and fellow Daywind artists, Riley Harrison Clark and Gary Casto of Tribute Quartet. Within a day of Jonathan and Sarah arriving in Nashville, the Blackwood Brothers contacted the talented but unknown singer and scheduled an audition the next day. Jonathan landed the job.

Things were hardly easy for the Blackwoods' new lead singer. Jonathan's wife Sarah was about six months pregnant with their first child when the baby developed complications in utero. The doctors in Nashville advised the expectant parents that they would need to take their baby at 28 weeks, and that he might not make it if they didn't. As it turned out Asher was born at 28 weeks weighing 1 lb 14 oz. Now at two months old, his weight is up to five pounds and the doctors are optimistic that he will continue to grow and thrive. 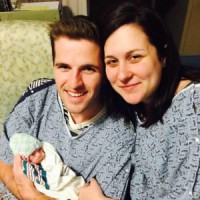 The group, now consisting of Jonathan Mattingly (lead vocals), Butch Owens (bass), Wayne Little (tenor) and Billy Blackwood (baritone), are continuing to sing their classics like "I Was There When It Happened", "Learning To Lean", "Lift Up The Name Of Jesus", "I'm Following You" and a dozen more. In a recent interview in the newspaper Lodi Sentinel recently Billy Blackwood spelt out their attitude to music and ministry. "We're exclusively gospel. Gospel music is what it is. It's rooted in a belief in God and a belief in the Bible, so all the songs' subject matter pertain to that, but there's a vast array of subject matter there."

Tony, thank you so much for the article in Crossrhythms.
I appreciate your including us and your kind words. If I can ever be of assistance please don't hesitate to contact me.
Blessings to you,
Billy Blackwood / The Blackwood Brothers Quartet