The Brilliance: Pushing the artistic boundaries of worship music

Tony Cummings reports on the band fusing modern worship with the liturgical tradition, THE BRILLIANCE 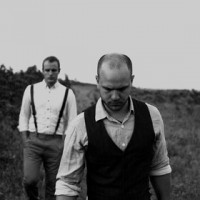 The Christian music industry, like its mainstream counterpart, has struggled to come to terms with the downturn in music sales brought about by illegal downloading, streaming and other factors though the sales of modern worship continue to keep the ship afloat. Not that modern worship hasn't had its critics over the last few years. Too many albums have been released which follow an unimaginative pop rock musical formula while too many lyrics have been clumsy paraphrases of over-used Scriptures. Thankfully the Church has been mounting a creative response to these criticisms and acts like David Crowder, Rend Collective, Gungor and Kings Kaleidoscope have all brought something fresh to corporate worship music. To this list one should now add the name The Brilliance who since their formation in 2010 have demonstrated that modern worship can cross pollinate with the liturgical tradition to create something new.

The founders of The Brilliance are David Gungor (the brother of Michael Gungor) and John Arndt. The origins of the group go back to when David was leading worship at a church in Tulsa. Said David, "The Brilliance was started to really have a different sound for worship music. I was tired of playing the same sounding music every Sunday. And so, I was inspired by my wife and my brother-in-law who are classical musicians." David wanted to craft original music written around the liturgical calendar for his congregation. He sent some ideas to John, who was living in Austin at the time. From there, the two began creating and recording under the moniker of The Brilliance. Over the next few years the duo, with a variety of musicians including cellists, violinists and rhythm players, began recording albums and sharing their music on the road, in churches and "house shows" around the USA. Skilfully using viral marketing The Brilliance released a self-titled album in 2010 followed by a stream of subsequent releases: 'Advent Vol 1' (2011); 'Advent Vol 2' (2012); 'Lent' (2012); 'Advent B Sides' (EP) (2013); 'Cavetime: A Worship Experience' (2012); and 'For Our Children' (EP) (2014).

A review by Catholic writer Cristobal Almanza of a Brilliance concert at Grace Covenant Church in Austin perfectly articulated the broad based appeal of The Brilliance though it also showed an ecumenical stance about which many conservative evangelicals will have a problem. "A few weeks ago I went to the most unique Christian music concert I have ever attended. As an artist, I always enjoy supporting the arts that help to promote the faith in visual art and performance art, but I don't think I saw this coming. Usually, contemporary Christian music makes me think of artists like Matt Maher or Jackie Francios. Then there's the older forms of Christian music that go back a few centuries, like Gregorian chant, or even classical that are based on prayers and the Mass. Listening to The Brilliance, it's hard to put The Brilliance in a category with any of those. I'm fairly comfortable praying with Protestants, but this night showed me new lessons in ecumenism. The very fact that a non-Catholic group decided to do EPs to explore the Liturgical calendar is enough to get my attention, but then I listened to the lyrics and I was absolutely blown away. Each song was carefully crafted as true works of poetry. The first song 'Dust We Are And Shall Return' focuses on themes of Ash Wednesday. The lyrics are based on the imposition of ashes with the reminder of our mortality and the necessity of dependence on God."

Almanza continued, "The second song, 'Now And At The Hour Of Our Death', is where I was caught off guard so much that I ended up overwhelmed with emotion. At the concert, David Gungor paused and took the mic before beginning the song. He explained that the next song was based on 'an old prayer that has been prayed for centuries by our Catholic brothers and sisters.' I was certainly intrigued by what he was about to sing in a church full of mainly Protestant and a few Catholics. I was on the edge of my seat. The song begins with 'Holy Mother of God, pray for us, pray for us.' I almost didn't believe it. Non-Catholics not only talking about Mary in a Protestant church, but asking her to PRAY for us. I would have fallen out of my chair if I hadn't started tearing up. Simply beautiful."

"Beautiful" is a word that comes up regularly when journalists and fans attempt to describe The Brilliance's music. David, who is now at Trinity Grace Church in New York City, and John, who now resides in Chicago, have been blending a classical aesthetic with traditional pop form to create a sound built on piano and string arrangements that, while comfortingly familiar in many ways, is unique within the space of worship music. "Some of the greatest classical works ever composed were for the Church," David offered. "We want to make art that, in a sense, is commissioned by my church and is music for the church; but that tells a bigger story."

Not all of the songs created by The Brilliance are meant to be sung corporately. Said David, "Oftentimes, worship music, in particular within the Church, has been something where you tried to get people to be as loud as possible. 'Stand up with me; sing as loud as you can' - which is great, but I thought about my own life within the context of prayer... learning how to listen to God and not always speak. I long for moments within a larger group where we can be quiet together or we can lean in together."

The world's largest worship music company, Integrity Music have now signed The Brilliance and on 17th February released the group's latest album, 'Brother', globally. Said Integrity's vice president of A&R, Adrian Thompson, "What I love about The Brilliance is that when they play, the atmosphere changes. They bring the beauty of art into our worship times with a sense of meditation, reflection and joy to create a 'Selah' moment in the middle of our cluttered lives. I believe The Brilliance have something important to bring to our worship moments. They cut across denominations, cultures and ages. that is why we are delighted to be able to partner with them."

The title track for 'Brother' was written in response to a trip David took with a group of songwriters to Israel, where he saw firsthand the confusing collision of Jewish, Muslim and Christian cultures - equally an enlightening and disconcerting dichotomy. "We just went to learn stories with no agenda other than open hands and listening ears," he explained, but back home David had a bout with writer's block and a longing for peace and justice - a theme that permeates 'Brother'. Confessional cut "Yahweh" emerged six months later when he was finally able to put words to his experience.

"The only way to work toward peace for anyone, no matter what faith, is to first live within a different narrative," he commented. "For me, as a person who's really trying to work for peace through our music, the question is, how do we let people wrestle with the tension of longing for justice and peace in certain issues?"

"Dust We Are And Shall Return" was written specifically for Ash Wednesday and focuses on accepting our own mortality. "Growing up as a young evangelical kid, I did not like to talk about death," David said. "I only wanted to think about life and Heaven. But preparing to die... I never thought of anything like that. So dealing with your own mortality, it can sound dark, but it actually is a really beautiful process." Not only do the lyrics require thoughtful consideration, the instrumentation reflects the central theme of the song, ending on the very same note where it begins and mirroring the arc of the human life.

"Make Us One," written during Advent, also allows the melody to reflect the sentiment of the lyrics with distorted, ethereal vocals panning from one speaker to the other, building to gang vocals. "It is a very crazy song," David admitted, adding that listeners will either love it or hate it - no in between. "It's in a different time signature; the two become the one; it changes keys. It's a very complex thing that's going on. Everything is very intentional in how it's written. I don't think we've ever written a song that we're more excited about."

Then there's the poignant "Does Your Heart Break?" - a song originally written for Lent. In light of recent cultural and religious clashes around the world, the song takes on new meaning. David revisited the lyrics and revised the second verse to reflect the emotions of his congregation amid unrest in New York following the questionable death of an African-American man, giving his church a chance to grieve during Advent.

The Brilliance hope their art can transcend the walls that divide the body of Christ and at the same time fulfilling the world's longings for peace and justice. Said David, "For me, the reason I follow the teaching of Jesus Christ is because it actually brings life and truth, and it transcends certain boundaries. We love art, and we love the idea of making art within the Christian narrative... We want to push boundaries artistically to inspire the imagination."

I like the idea of NO drums or Electric guitars, sounds mellow and good lyrics, and the fact that Integrity signed them up, they must be good, I look forward to going and hearing them. There coming to my daughters church Axiom, in Peoria, in Aug 2018. Letâs GO!!!