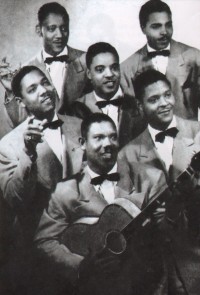 Back in the '50s, long considered "the golden age" of gospel music, a 72-room hotel in downtown Newark, New Jersey was a pivotal stopping off point for the hundreds of acts travelling the Gospel Highway. The Coleman Hotel was not only a comfortable retreat for the Ward Singers, Mahalia Jackson, the Dixie Hummingbirds, the Swan Silvertones and all the other artists merging ministry and music. It was the HQ for a record label and singing group who were seminal figures in gospel music's development. Yet as Opal Louis Nations wrote in his sleevenote to the 2006 compilation 'The Coleman Brothers' (Acrobat Records), "It's quite extraordinary to think that the Coleman Brothers, so much a part of the transitory impetus that took gospel quartet from disciplined jubilee singing into 'hard', uninhibited 'shout', would be left out of the CD reissue market entirely. In fact, they were never even culled for release in times of vinyl, except for six songs on the long out of print Gospel Heritage label (1990's 'Newark Gospel Quartets'). The recorded Coleman outfit cut at least 18 records during there most visible period (mid to late 1940s) and were able, like most black quartets struggling to survive in a limited competitive market, to pitch when needed folk, R&B, country and pop tunes with equal skill."

And to add to the Coleman Brothers achievements one might add that the group's Lander Coleman wrote the song "Milky White Way" which was a hit in 1947 for The Trumpeteers and his subsequently become a gospel standard recorded by a myriad of diverse acts including Hank Locklin, Take6, the Swan Silvertones, Bill and Gloria Gaither, Little Richard and even Elvis Presley (though the latter's version is scandalously credited "trad arranged Presley"!).

The Coleman clan were originally from Kenbridge, Virginia, not far from Lunenburg where a sizeable gospel scene thrived. Opal Nations wrote that "the genius behind the Colemans on record is Lander Coleman." Indeed this extraordinarily talented man, born on 26th April 1913, went on to be, as well as a singer, a composer, broadcaster, quartet manager, recording engineer, record producer, record label manager, night club owner and the key figure in taking the Coleman Brothers to national popularity.

The first Coleman family aggregation dates back to 1917 when various members of the Coleman clan relocated from Virginia to Montclair, New Jersey where lucrative employment opportunities were more bountiful. This group included four of Lander's uncles (Levi, Lewis, Matthew and David Coleman) who brought their families. All had had prior church singing experience back in Kenbridge. This Coleman group sang spirituals and jubilees in churches and meeting halls throughout New Jersey. The group never recorded though and by 1926 had disbanded.

Lander and his family moved out to Montclair, New Jersey in 1925 when he was 11 years old. Just prior to the breaking up of the first Coleman group, a second was formed from members of Lander's family, namely Wallace (tenor), Everette (lead) and Jack (bass) plus outsiders Robert Tippins (baritone) from Atlanta and Howard Harris (second baritone). This group stayed with the traditional spirituals and began working church venues and local concert programmes.

A second junior Coleman group labelled the Jubilee Four also emerged. This group featured 6 year old second tenor Lander plus outsider Robert Bright, a 12 year old baritone. The Jubilee Four charmed their patrons with skilled renderings of gospel standards like "Get Right With God" and Cedelia Martin's "His Eye Is On The Sparrow". The Jubilee Four travelled as far as Pennsylvania and New York to out of town concerts. Both the Royal-Lites of Philadelphia and Norfolk Jubilees (who were extremely popular at the time on Paramount Records) exerted influence on the teenage singers. In 1932 the Colemans and Jubilee Four merged to form one Coleman Brothers group. Variable membership included Everette, Lander, Wallace and Melvin plus, on occasion when the need arose, John Pettis (second tenor) and John Tyler (bass), both from the competing Royal-Lites.

A year later, Everette switched to guitar accompaniment and 17 year old first tenor Russell Coleman took his place. By 1935 the group had crystallized with the addition of Danny Owens (who eventually went on to sing and record with mainstream acts the Melody Masters in 1947 and Four Tunes in 1948, the latter having a couple of major R&B hits).

In 1934 Lander Coleman got an unexpected break in mainstream showbiz. Two years earlier filmmaker Mervyn LeRoy had made a movie called I Am A Fugitive From A Chain Gang starring Paul Muni, based on Robert E Burns' (the fugitive) book. The celebrated movie had made Burns a sensational public figure. Having moved to New Jersey, Burns planned to further capitalize on his misadventures by writing a stage drama around them. Burns chose to open his play in 1934 at Atlantic City's Steel Pier. The troupe included a singing group called the Chain Gang Quartet. Burns, who was familiar with Lander Coleman's work, picked him to lead the group which also featured first tenor Jessie Ventermin, bass singer Harrison Kidd and baritone J Lynn. The stripe-suited Chain Gang Quartet sang spirituals and work songs in the stage show which led to appearances on live radio broadcasts. When the Chain Gang Quartet disbanded in 1935 Lander returned to the family group.

From 1935 to 1942 the Coleman Brothers were familiar figures on numerous package tours of the South and West, appearing with such notable artists as the 5 Soul Stirrers and the Dixie Hummingbirds. They garnered radio shows on WHBI in Newark and WPAT in Patterson, New Jersey. The coming aboard of manager Milt Lasnick in late 1943 turned out to be a blessing. Lasnick arranged a recording contract with Decca and the Coleman Brothers recorded the traditional "Low Down The Chariot" plus their often requested version of "His Eye Is On The Sparrow". The 78 sold rather well and was reissued in 1949 on the label's Coral subsidiary, but not well enough for Decca to issue more recordings right away.

In 1943 Barney Josephson opened New York's CafÃ© Society, the groundbreaking venue which brought together black and white entertainers. The Coleman Brothers got a residency at the club and the group were forced to establish New York as their new base. Soon they were broadcasting over influential radio station WABC. Success culminated in a "Staff vocal group" contract with radio giant CBS and soon the Coleman Brothers were beaming an early morning programme of spirituals, pop songs, hymns, folk tunes and country numbers to a large radio listenership. After President Roosevelt's passing, the Colemans broadcast a number of sacred songs over an entire three-day national mourning period. The tribute ran continuously day and night. 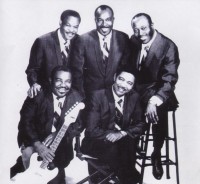 The Coleman Brothers continued their recording career in 1943 with some sessions for Regis/Manor Records owned by Irving Berman. It was not a happy association. The Colemans recorded "Milky White Way" and it was in the first batch of releases on Regis in March 1943. But the song wasn't a major hit until the Trumpeteers clicked with a cover version of the Lander Coleman song. The first three 78s Regis/Manor did release by the Coleman Brothers were later packaged as a 78 album for the white folk/jazz cognoscente rather incongruously titled 'Spirituals Of The Old South'.

In late 1944 the Colemans pooled resources and set up the Coleman Brothers Company, a recording enterprise at first set up to promote African American gospel recordings, dwelling on not only their talents but the skills and ability of those who had become their trusted friends out on the road, such as the Dixieaires and the Blind Boys Of Mississippi. Melvin was set up as president, Lander served as vice president and Russell as secretary. The record company was situated beneath what was to become the 72-room Coleman Hotel at 59 Court Street in Newark. A recording and broadcast studio was installed and a live hook up with Newark's radio station WHBI was set up. The Colemans broadcast over WHBI twice each Sunday at 12:30 and 4:30pm. The Coleman Hotel provided warehouse space and reasonable accommodation for visiting and/or recording talent who invariably had little money.

Six Coleman Brothers releases appeared on their imprint, all recorded in 1945-46 and issued over a period of four years. Decca, who still owned held-back sides on the group at that time, continued to issue material into 1946. Because Coleman Enterprises grew rapidly Melvin was forced to retire from the singing group. He was replaced by basso AJ Eldridge from Hartford, Connecticut. Eldridge became one of the family and was considered a brother. To appeal to black viewers, the Coleman Brothers were brought in by NBC to record a coffee commercial for Chase & Sanborn. The group toured extensively and landed a contract with the pioneering TV station WLW in Cincinnati. This necessitated a move to Ohio.

In 1947 Manor Records, who still had material left in the can, issued two further releases by the Coleman Brothers. While at WLW-TV the Colemans did commercials on a variety of daytime shows. They also won a contract to do a series of spots for Western Auto Stores. The Coleman Brothers showed up at country fairs as part of the WLW Road Show. The latter part of 1948 saw the resumption of extensive tours across the US, Canada and Hawaii. The Coleman label even enjoyed a sizeable mainstream hit with the Ray-O-Vacs' chirping "I'll Always Be In Love With You", a song first introduced by Morton Downey in 1929 in the movie Syncopation.

I am Octavius (Buster) Coleman's daughter. Lola was my grandmother and Frances is my aunt. Please contact me at 253-988-1703 if anyone would like to connect.

There is so much about my family I never knew. I will be visiting my Aunt this summer and spending time with her on her birthday which falls on the 4th of July.

I am The granddaughter of the late Rev Dr James Coleman and I remember my uncles singing and grandpa singing while he preached 🙏Nothing but wonderful memories of my family ❤️❤️❤️❤A 039;❤️

It was great reading this article, so powerful! The Coleman's has such a strong root.. Such inspiration. My mother(Dorinda Coleman daughter of Alfred Coleman) use to tell my sister and I a lot of stories about the Coleman family. Great reading this!

Hello, My name is Qaadara, I'm the granddaughter of Alfred Coleman. I would love to meet my family. Please contact me 908-397-4917.

I am the the Granddaughter of the
Late Rev,. Russell G Coleman and the daughter of his baby girl Denise Green/Johnson

I am a hard gospel record collector, and I have a number of Coleman Record Co. sides in my collection. I really enjoyed this article. I would love to get a discography of all the sides issued by Coleman Records. Does any such discography exist? Thanks.

Hello family, I am the son of Wallace and Marie Coleman and the youngest grandson of Willie and Lillie. Please connect with me at wallacepcoleman@gmail.com

I'm Jack Coleman Great Great Grandson...His Eldest daughter Gloria Coleman's youngest Grandson.....This article has inspired me to believe in myself....My generation has forgotten or never knew about the history of our family.......Peace

I am the grandson of Beulah Coleman, she was the baby sister of the Coleman Brothers, there were 10 boys and 2 girls, Ula and Beulah. Anyone from the Coleman family feel free to contact me at 443-850-3010

This is lander Coleman jR. Son of lander sr.Sisters Saundra cookie diane Any of the amediete family please call me @ (920) 809-6159 Hope to hear from you soon!!!!