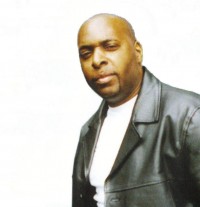 Slowly but surely gospel reggae music has established itself as a small but viable sub-genre. In Jamaica acts like Marcia Griffiths and Carlene Davis have become big sellers while in America artists like Christafari and papa San regularly make Billboard's reggae chart. In Britain too though still a rather underfinanced underground, gospel reggae has found a support base among Afro Caribbean Christians. A key figure in the development of Britain's gospel reggae scene is the Nottingham-based 46 year old record producer Errol Mundle. In 2005 Jetstar Records released the album 'ELM Project: Gospel Reggae Vibes' featuring vocals by Errol M as well as Marcia Page, All Bout Christ (ABC) and Shama. It gained considerable attention and now 'ELM Project 2: Gospel Reggae Vibes' has been released, on Mundle's own Elm Tree Records, and this time featuring vocalist Marcie Elliott. Cross Rhythms quizzed Errol E Mundle about his life in music.

"My parents came to the UK from Jamaica in the '60s. My dad was a pastor. My mum used to sing and I guess that's where my interest for music started. My dad loved records and used to play them on the old Blue Spot gram that we had all those years ago. When I left school I started a sound system called Top Notch Hi-fi and we played parties and private sessions at our local youth club and became a well known lover's rock sound system playing with the likes of Saxon and Wassifa."

Things progressed for Errol and he got the opportunity to present a radio programme on Trent FM. That led to reggae shows on local BBC stations in Derby, Leicester and Nottingham. His career flourished and he was meeting the top reggae stars like Dennis Brown, Gregory Isaacs and Maxi Priest. Recounted Errol, "I then got into remixing and remixed a lot of work for artists all over the world which led to me setting up my own label called ELM Records and releasing a couple of tracks. But then over the years my life changed - everything was great, I was making money, meeting famous people, but there was something missing. That's when I realised it was Jesus I needed in my life. So that's how I got into gospel music, listening to the likes of the Winans, BeBe and CeCe, Kirk Franklin, Clark Sisters and many more. Then it was a blessing to hear people like Papa San and Stitchie."

In 2004 Errol began working on what was to become 'ELM Project: Gospel Reggae Vibes'. He said, "It was a blend of the lovers rock feel but recording familiar songs like 'Lost Without You' (originally cut by BeBe & CeCe Winans), 'Great Is Your Mercy' (Don Moen) and 'Seek Jesus Christ' (Kirk Franklin). We used a number of different singers on the album and it was a nice change from the normal reggae vibes we were getting. I also taught in schools and colleges running choir courses and setting up a youth and community choir. I still work in an inner school at the moment working as a learning mentor."

The second volume of 'ELM Project: Gospel Reggae Vibes' was launched at Nottingham's Mansfield Road Baptist Church on 31st October 2009. Errol spoke about the album: "This project features just one singer and myself and her name is Marcia Elliott from Nottingham. She is a single parent who has been singing for some time and never got the opportunity to do what she is doing now. She is a product of what we are setting up in Nottingham with the studio. This project is very similar to the first instalment but it has progressed a bit further using well known songs again but the production is better than the first project."

As well as the sinuous rhythms of reggae Errol is also working in other musical arenas. "I don't just produce gospel reggae. I have also started the ELM praise and worship project which features seasoned singers like Tracey Campbell, Carla Hayles, Barbara Brooks Thomas and my own choir called the ELM Choir. This album is a blend of praise and worship, rare groove soul and R&B."

Hi,, nust wandering if you sing at weddings, we are christians and would live gospel reggae at our wedding reception. Please let me know if you do this. I have been a christian for just over four years now and love God.

MOST HONORED DEAR SIR
GREET S TO ALL IN THE NAME OF JESUS CHRIST
I AM RAMANUJAYYA .M FROM INDIA I WORKING IN EVANGELIST OUR AREA MOSTLY WE ARE CONTACTING TO GOSPEL MEETINGS 12 DAYS 4 DIFFERENT PLACES IN INDIA==2015 WE MUST NEED HOLY BIBLES, SOUND SYSTEM.GOPSEL TRACTS, SOME BOOKS. KINDLE PRAYER HELP TO GOSPEL MEETINGS IN INDIA HARVEST===2015

Errol is an amazing producer, I just love what he is doing, he's a true blessing to those whom he meets, with inspirational testimonies and awesome music. keep it up Errol as i look forward to recording with you again, Bless You

Great article. Errol is doing a great job representing the Gospel through music and I for one am a big fan.