Ahead of their double bill performance with the McCrary Sisters, Lins Honeyman caught up with the latest incarnation of legendary gospel group THE FAIRFIELD FOUR

As Cross Rhythms' 2013 retrospective on legendary Nashville-based harmonisers The Fairfield Four showed, the group's 94 year history is a remarkably rich and diverse one. Originally formed in 1921 by Reverend JR Carrethers at Nashville's Fairfield Missionary Baptist Church, the group's ever-evolving line up has allowed them to remain active and in demand to this very day. This has in no small part been down to the guidance and drive of arguably its most prominent member the late Reverend Sam McCrary - father of gospel vocal foursome the McCrary Sisters - who, after joining in 1935, ensured that the group remained faithful to its roots whilst developing an ongoing appeal that sees the Fairfield Four approach their centenary in a mere six years' time.

In popular demand as an act in their own right as well as collaborators of choice for other artists, the Fairfield Four have appeared on countless recordings over the years and have teamed up with luminaries such as Elvis Costello, Dolly Parton and Creedence Clearwater Revival singer John Fogerty whilst this year saw revered country singer Lee Ann Womack join the group on their most recent album 'Still Rockin' My Soul'. In addition, the Fairfield Four have been garnished with numerous musical awards over the decades including a Nashville Music Lifetime Achievement Award in 1995 and, two years later, a Grammy for their 'I Couldn't Hear Nobody Pray' recording whilst the turn of the century saw them inducted into the Gospel Music Hall of Fame. Widely considered as the group's finest moment to date came in the year 2000 with their inclusion on the soundtrack of the Coen Brothers' highly successful film 'O Brother Where Art Thou' which succeeded in bringing their rich harmonies to a whole new audience.

The Fairfield's 'Still Rockin' My Soul' was released on 9th March this year. Jerry Zolten wrote in the liner notes that the group "intertwined voices rhythmically, pulsating in harmony, anchored by a deep bass and rooted in that hazy past before the era of recorded sound." On the album the Four offer fine versions of Lucie E Campbell's "Jesus Gave Me Water" (popularised by the Soul Stirrers); Thomas A Dorsey's "Highway To Heaven"; "I Got Jesus And That's Enough" by Dorothy Love Coates; and The Swan Silvertones' "My Rock".

Now on its umpteenth line up, The Fairfield Four presently consists of Larrice Byrd Sr on baritone vocals along with tenors Levert Allison and Bobbye Sherrell whilst Joe Thompson provides the foundation to the group's trademark harmonies with a bass voice deep enough to almost rattle the furniture. We chat in a makeshift interview room at Perth's Concert Hall. I begin by asking the foursome to shed some light on the secret of The Fairfield Four's longevity.

"The biggest secret is the one who made us - our Creator and sustainer," advises Joe Thompson. "It's God's word that keeps us going," adds Larrice Byrd. "The ministry part of what we do also helps to keep us going and gives us the motivation to keep on spreading the word through the songs."

I suggest that part of the reason for the Fairfield Four staying the course is the trademark harmony sound that seems to have lasted through the decades despite numerous personnel changes: "The Fairfield Four built a sound over the years and we try to stick to that format and, since we're the new guys, we're not going to come in and try to make lots of changes," reassures Larrice. "We want to keep the sound that the Fairfield Four is known for."

Mention of the current line up's predecessors prompts a quickfire history lesson of the group's formation and evolution which signals a respect and reverence for all four's Fairfield Four forefathers. "They came out of the church where the name came from - the Fairfield Missionary Baptist Church," informs Joe. "The group started out as three - JR Carrethers and his two sons - and they picked up another lead singer to make four." 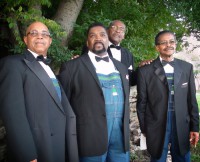 "At one point there were six of them," interjects Larrice, referring to the fact that the number in the band's title refers to harmony parts as opposed to the specific number of singers at any one time. "That's when they tried using instruments but they dropped the music and came back to the singing," Joe replies. "We wanted to keep the a cappella tradition going," advises Larrice. "It's basically what the Fairfield Four have been known for and not having to carry instruments around means we can set up shop anywhere. We even go to the mall and serenade sometimes!"

Whilst performing in a shopping centre is typical of the present incarnation's genuinely humble and ego-free attitude, it does seem astonishing that a group who still receive a flood of praise and recognition for their involvement in the soundtrack of 'O Brother Where Art Thou' should choose to ply their trade in venues other than the kind of concert halls that have played host to both The Fairfield Four and the McCrary Sisters on their current Rock My Soul tour. "We're still getting compliments about the movie and the soundtrack even though most of us weren't part of the group at that time," confesses tenor Bobbye Sherrell. "It's important for us to keep that tradition going and to get better and better at what we do. We've been received well everywhere we go which always helps and it's a good feeling that people are now wanting to appear on our records. The 'O Brother' soundtrack helped open the ears of different generations to the sound of The Fairfield Four and it feels like we've finally arrived but, really, we have so much further to go. We don't want to brag but it sure is a good feeling and it's important for us to keep the group going."

Bobbye's thoughts on keeping the tradition of The Fairfield Four alive prompts Joe to recall the influence of the father of the group that they will be sharing the stage with as they close this year's Southern Fried Music Festival at Perth Concert Hall. "The McCrary Sisters' father, the Reverend Sam McCrary, was one of the mainstays of The Fairfield Four," he advises. "He was instrumental in keeping the group going when people left and - here we are - still going."

With The Fairfield Four's centenary in 2021 fast approaching, attempts to extract some information about the plans for this gargantuan milestone are met with a knowing silence other than Larrice confirming, with a sparkle in his eye, that they do have plans but they would rather keep them a surprise for now.

Preferring to talk about the here and now, Larrice is enthusiastic about what he feels is God's calling on each member's life. "We feel like we've all been called to do this. We didn't just decide to do it all on our own and we feel blessed to stand before men and women and do what we've been called by God to do which is ultimately share the Gospel."

"It's a privilege and a gift," adds Levert. "God enables the four of us to project his word to the people. We can't go wrong if we live in him." Agrees Larrice: "It seems like God just knew what we wanted when he placed us guys together. We all have the same background - we all came through the church and we were brought up singing."

With a rehearsal for the following night's Rock My Soul performance to uphold, Bobbye speaks on behalf of his colleagues to sum up their part in the history of one of gospel music's greatest ever acts. "When I think of what the Fairfield Four has achieved, I think of how Henry Ford would feel if he were around today and saw what he started was still going strong and his cars were still being made. It's like that with the Fairfield Four - we're just continuing what the Carrethers started and Sam McCrary built up and it's such an honour to do that."