One of the most influential and longest running alternative worship initiatives is Glasgow's THE LATE LATE SERVICE. Susan Mansfield visited them. 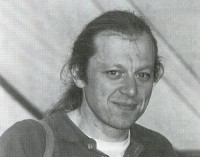 The gothic facade of Woodlands Methodist Church is pulsating to a dance beat. Coloured lights flash out through its stained glass windows. You might walk the streets of Glasgow for a long time looking for the Late Late Service, but you'll know it when you find it.

It's nine pm on Sunday. That's late, late for most churchgoers. But then this is a world away from a pew-and-prayer-book service. Inside, draped canopies mark out a dancefloor-ish worship area, and a mirror ball sends down shafts of coloured light. A young, cool crowd are jiving stylishly. My feet are glued to the floor.

"Use the space," says a voice from a dark corner where I can just make out some mixing equipment. "This is God's house. There's no need to feel inhibited. Worship God in a way that is helpful to you."

"I was quite embarrassed when I first came," says Charlie Irvine, reassuringly. The guitarist from Lies Damned Lies has been a committed member of the Late Late for several years. "I wasn't used to the idea of dancing in church. But immediately I knew there was something in this for me."

"Tonight we are going to explore the nature of the prophet in our society," says the disembodied voice. The beat throbs, while words, images and colours flash onto the screens and canopies around the dancers: Newbury anti-roads protesters stuck up trees, the Ploughshares women who disarmed a hawk jet bound for Indonesia. It's right-on and in your face, and it's empowering. "We are the possibility people," the voice repeats. "The world CAN be restored to its original beauty and everyone CAN have enough to eat."

My feet are still nailed to the floor when the music slows and the more meditative, liturgical part of the service begins. To a synth wash and deep-throated sax, we share an imagined journey in the desert of the prophet searching for God.

Now seven years old, the Late Late Service is on a journey of its own. It was never meant to be a church. Initially it was only a one-off youth event, co-ordinated by former Bug Sur musician, Andy Thornton in 1990. But sensing its potential, the artistic team who had devised it tried again, and again, and then started a monthly experimental service.

It still wasn't meant to be a church, just a place to explore new forms of worship. But the creative core who prepared each service found they spent so much time together they were becoming a community. They started to meet weekly but realised they needed a variety of services.

A cycle of four developed: teaching, meditative or quiet service, fellowship night and celebration. A theme will often be followed through all four. Lay communion was introduced later and a healing ministry between the members. Sympathetic clergy carry out marriages and christenings when required.

The transition from event to community came five years ago, but they have not been easy years. The collapse of Sheffield's Nine O'clock Service (NOS) amid revelations of gross misconduct by vicar Chris Brain was a dark time for alternative worship. Journalists came snooping around the Late Late. A tabloid ran an article linking them - erroneously -to NOS.

There is still a thread of anger in the Late Late in that a form of worship can be so quickly tarnished when disaster strikes the personalities involved. "In the wider church it confirmed people's worst fears, that dance is linked to the wrong kind of sensuality," says Andy Thornton, Late Late founder, who has just become manager of Greenbelt. "It was an absolute tragedy for the Church. So many people hoped it was a way forward in a post-modern society."

The NOS experience has made the Late Late community cautious: cautious of the press, cautious of making too much of its achievement, keen to be accountable to other churches. It eagerly joined the local ecumenical group (Action Of Churches Together In Scotland), and enjoys good relationships with other congregations.

"Finding a new way of being church is the last thing we should do, cutting ourselves off from the rest of the Church or saying we're better," says Thornton. "I see it more as extending the menu of worship."

At the heart of the Late Late is a group of people who are dissatisfied with aspects of the traditional church. Dancer and TV producer Liz Ingram, on the Late Late steering group, came to the community when she was "increasingly angry with the established church. I was doing community dance projects in deprived housing schemes and it was a life changing experience. But there was a gap. I was sitting in the pews on a Sunday often listening to someone giving a bad performance."

Hi, does anyone know if the Late Late Service is still running, and if so, is there a website or some kind of contact?