The house beat thuds again at Greenbelt. This time it's Scotland's The LATE LATE SERVICE. Tony Cummings spoke to the alternative worship organisers. 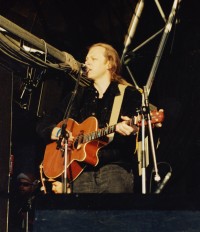 After the disaster that was NOS at Greenbelt '92 - and all the PR bluster from Greenbelt organisers can't hide the fact that the festival shot themselves spectacularly in the foot with that Nine O'Clock Service 'experiment in worship' at last year's event - Greenbelt have to be credited for bouncing back. For this year Greenbelt have boldly taken steps to revolutionise the flagging Sunday morning communion service worship. OUT goes the lona Community's gentle folkiness, IN comes an 'alternative worship service' where multi-visuals and a thunderous house beat will be the vehicle to enable the huge open air congregation to praise and worship God. In fact, of course, The Late Late Service are no newcomers to Greenbelt. On two previous years they've been an alternative tented attraction at the event. But now the Glasgow-based worship collective have been given the larger platform, hopefully wrenching GB's communion service once and for all from its aura of gentle, ecumenical niceness. The driving force behind The Late Late Service is musician, studio engineer and album producer Andy Thornton, once a Greenbelt favourite with fondly remembered secular rock team Big Sur. After the band folded, Andy spent time writing songs and recording and programming in his 8-track. But why Scotland? "I went to university in Dundee and that's why I ended up in Scotland. I went to Glasgow to work with the church as a youth worker."

A visit to St Thomas, Crookes in Sheffield, home of the pioneering NOS, in 1991 really impressed Andy. "Through me losing my drummer there, I was only in for about a minute, but I saw what was going on. In some ways I was quite confused by it. Then one day I was asked to do something at a youth event which I didn't really want to do. I said I wouldn't do it. Then I got the idea of taking the few things I'd seen at the Nine O'Clock Service and seeing whether with some other people, we might do something similar. Most people say I was the originator but I was just the person who said to friends 'do you want to be in the team that does some alternative worship?' Really the team were the originators. I just happened to know people through the music business."

But why should Andy and friends want to take a step into the unchartered waters of alternative worship? "There was a gathering of people in Glasgow who were disenchanted with the church. They needed a kind of focus that would bring them together, a church celebration that would make sense to them, worship that was produced so that there was more sensual excitement and stimuli than in standard forms of church worship. It was absurd that the Church expected you to leave your senses at the door when you walked in. Or why was it necessary for us to revert to mid-60s music? Why couldn't we at least write songs that encroached on the 80s, if not the 90s?"

So Andy set out to write some. With his drum computers and sequencers he emerged from his studio with music a long way from Songs Of Fellowship let alone the hymnals of Scottish church traditionalism. With these dance-orientated tracks Andy and friends put on his one-off alternative worship celebration. Soon, as the Late Late Service, meeting the third Sunday in every month at St Silas' Anglican church, it had become a regular fixture of Glasgow religious life, drawing in a wider and wider circle of youth culture many of whom wouldn't have been seen dead in a less 'stimulating' environment. Now the Late Late Services' strobes, giant screen projections and heavy dance music have, in turn, inspired other 'rave praise' and 'alternative worship' groups to start their own initiatives. I asked Bob Jay of The Late Late Service music group how precisely an alternative service ensemble is organised. "There are 20 of us now. We're roughly divided into three working groups. Photography, music and video, we work in those groups in independent sections of the service."

Ann Davies from the Late Late Service's music group admits that the team are blessed with excellent resources. "All the music that is used in the Late Late Service is original music. We are fortunate to have access to two recording studios in the group - Andy's and the one at Heatherland. We have the capacity to produce original music for each new service. Each service contains some new music. Every month there will be at least one or two new tracks written!"

The best of the LLS's eclectic mix of rock and house-oriented worship tracks have been released on two albums, the latter volume through key Scottish indie Sticky Music. But though these tapes have sold like veritable hot cakes at Greenbelt, the organisers are anxious that their circulation doesn't just result in merely alternative worship groupings playing The Late Late Service tapes. "I'd rather people were innovating their own music," says Andy. The Late Late Service is strongly committed to bringing together Christians from the widest range of denominations possible.

"I think there's a strong ecumenical commitment amongst us," admits Andy. "We come from a variety of backgrounds, Catholics, Church of Scotland people, Church of England and people who don't go anywhere at all. I like that, it's quite a healthy mixture. Again I think this is one of the healthy things about this wave that you're talking about. It doesn't seem to be unlike the house church wave of 20 years ago. It's not saying that the church has collapsed so we need to start a new 'alternative' denomination. It's saying that we're happy to stay within our existing denominations, whatever they are. Nobody wants a new denomination, who needs them? Our generation has just seen too many. It's more a question of both starting new culturally relevant things and also taking our traditions and rediscovering them."