The Gospel Music Encyclopedia Uncloudy Days calls the Pilgrim Travelers "probably black gospel's first showmen." Their wild church performances which saw them running off stage and up the aisles in order, in the words of their manager J W Alexander, "to pull the sisters out of their seats" and their compellingly exciting records with switched lead vocals earned them a big audience. Ray Charles credited as one of his models the Pilgrim Travelers baritone Jesse Whitaker when Ray fused hard gospel style to secular themes to create soul music in the '50s. Another giant of soul music Lou Rawls rose from the Pilgrim Travelers ranks.

The group were formed in 1936 when Joe Johnson gathered together a group of young men from Houston's Pleasant Grove Baptist Church and formed the Pilgrim Travelers. As a community-based group, personnel, style and repertoire changed frequently as they appeared in the area, usually on weekends at church and quartet concerts. Their membership began to stabilise in 1944 when, after winning a quartet competition, they were given the opportunity to travel with the Soul Stirrers.

In 1947 Johnson decided to move the group to Los Angeles rather than to Chicago to avoid direct competition with the Soul Stirrers. In LA they began recording for Bob Geddins's Big Town label in Oakland and the small Greenwood label operated by Mrs Greenwood, whose record store was a haven for early quartet singers in Los Angeles. By this point Johnson had turned over the management of the group, returning later with a new group, the Chosen Gospel Singers. Johnson served for many years as an advance man for Herald Attractions, setting up the package gospel tours that filled churches and auditoriums in the '50s.

The three 78s the group recorded for Big Town/Swingtime featured tenors Kylo Turner who had worked as a farmer in Cleveland, Texas, and J W Alexander; baritones Willie Davis and Isaiah Robinson and bass singer Rafael Taylor. By the time of their two Greenwood singles Keith Barber, Kylo's cousin, had replaced Davis. The Pilgrim Travelers' new manager was James "Woodie" Alexander. He quickly established an iron grip on the group, co-ordinating stage behaviour, selecting uniforms and working tirelessly to establish the Pilgrim Travelers as a top gospel draw. 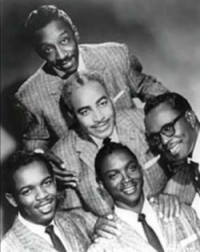 Alexander was born in 1916 and reared in Coffeyville, Kansas, home of the legendary African American choral director Eva Jessye (1895-1992), and sang both gospel and popular music during his youth. Before joining the Pilgrim Travelers in 1946 he played professional baseball in the Negro League and sang with the Southern Gospel Singers. In the words of The Golden Age Of Gospel's author Horace Clarence Boyer J W had "more than a bit of the smooth operator blood in his veins." But the behind-the-scene's dictatorial style was fused with charm and Alexander used this to push the Pilgrim Travelers into the forefront of gospel quartets.

After an appearance at People's Independent Church, Mrs Greenwood brought the Pilgrim Travelers to the attention of entrepreneur Art Rupe whose Specialty Records were to become one of the biggest independent labels of the '50s.

In 1948 with Specialty the Travelers scored successes in the gospel market with their two biggest hits. W Herbert Brewsters' "Thank You, Jesus" and Mary Lou Coleman's "Jesus" (with which the Ward Sisters also scored a major success in 1949) showcased the group in two of their three styles: gospel jubilee and gospel ballad. Wrote Horace Clarence Boyer, "While 'Thank You, Jesus' sets up a toe-tapping tempo over which the group literally spits out their thanks to Jesus for bringing them 'a mighty long way,' 'Jesus' is cast in sombre colours and tempo - one of those instances where tempo and mood belie the text. The text of 'Jesus' is a rehearsal of the goodness of the Lord and could very well have been delivered as a jubilee or a shout. The ballad tempo, however, ensures strict attention to the lyrics; a more sprightly tempo might have drawn the listener to the beat. The song begins with an anticipation by Turner on the word 'oh,' to which he assigns nine different tones, followed by the entrance of the group on the word 'Jesus.' To give the fullest accentuation to the word, the group pronounces it as 'Cheesus' and delivers it in dark and resonant harmony. Before continuing with the text, bass singer Raphael Taylor inserts a riff (bum-bum-bum-bum-bum) of five tones (which would become a standard gospel 'lick'), as the group continues with 'when troubles burden me down.' A similar phrase is then delivered, including Taylor's insertion, with the words 'I know your love's all around.' The Travelers then deliver one of the signature melodic and harmonic devices on the word 'oh.' While the group holds a single tone, Turner begins his word an octave higher and shimmers down an octave where he will sing the remainder of the phrase. (This device would become associated with Ira Tucker in the early '50s.) While Turner became much more vocally active during the two stanzas of the recorded version, the song remains a prime example of the mixture of jubilee and gospel, for which the group became famous."

With Jesse Whitaker joining the group in 1947 the classic Pilgrim Travelers lineup - Turner, Alexander, Barber, Whitaker and Taylor - was in place to make a series of brilliant acapella recordings at Hollywood's Universal Recorders and Specialty released a fold of successful 78s. With their Specialty hits the Pilgrim Travelers had become one of the biggest acts travelling the Gospel Highway. But the dangers of constant travelling came home to the group in 1950 when they had a serious car accident, a head-on collision near Palm Springs that injured Keith Barber to the extent that his voice was ruined. Although he continued with the group his great soaring baritone was gone. 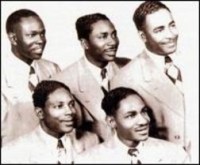 Whether singing another of their big hits, the jubilee-styled "Jesus Met The Woman At The Well", the gospel blues "Mother Bowed" or their doowoppish acapella favourite "Everybody's Gonna Have A Wonderful Time Up There" (covered by Pat Boone and turned into a number four pop hit in 1958), the Pilgrim Travelers were a thrilling act to behold. A publicity release from April 1951 noted that one of the largest audiences ever to attend a gospel programme in New Orleans had showed up to see the Pilgrim Travelers and the Spirit Of Memphis, filling the Booker T Washington Auditorium to a capacity of almost 3,000; over 500 fans had to be turned away.

Changes in the group's line up began to occur in late 1953. First, a third lead singer, Walter Budgett, was added. Originally from the Mississippi Delta, Budgett had been a quartet singer all his life, singing first with the Glorylanders of Clarksdale, Mississippi, then being picked up by the Kings Of Harmony of Birmingham. While in New York Budgett received the call to join the Pilgrim Travelers in Houston. He stayed with them less than a year but was on their January 1954 session, contributing the impassioned composition "I Love Jesus" and singing lead on Jesse Whitaker's "In My Heart". While the interplay of Turner and Barber remained the group's main attraction, Budgett would be used to lead on some numbers. Not feeling he really fit the group's style, Budgett quit to join the Chosen Gospel Singers.

After Budgett left, a major personnel change was the switch in 1954 from the group's original bass singer, Rafael Taylor, to George McCurn. McCurn was an experienced quartet bass, possessing a rich, deep voice, who'd once worked with the legendary Kings Of Harmony of Birmingham.

By the mid '50s things were winding down for the group. One release "Troubled In Mind"/"Every Prayer", which featured Freddie Sims on tenor sax, needed a press statement fending off criticism from conservative elements in the Church concerned that the group were "jazzing up" gospel music! In 1957 the group left Specialty Records and signed with Andex Records, a company owned by the Siamas family. The Pilgrim Travelers had brought in a new lead tenor, Lou Rawls, who had sung earlier with the Chosen Gospel Singers, and another lead from Houston, Ernest Booker. The Pilgrim Travelers recorded 15 gospel tracks for Andex together with some secular songs. The Pilgrim Travelers' 'Look Up' album was well received but more by white audiences than the gospel fraternity, thanks to the inclusion of the track "Go Down Moses" being used in the seminal film Blackboard Jungle which also helped popularise Bill Haley's "Rock Around The Clock". Years later their gospel recordings turned up on a budget line album issued by the Italian Joker label, mysteriously credited The Alabama Singers.

The Pilgrim Travelers were inducted into the Gospel Hall Of Fame in 2001. Over the last few years Ace Records have done a sterling job in re-releasing many of the group's classic Specialty recordings with the albums, the twofer 'Best Of The Pilgrim Travelers Vols 1 & 2', 'Walking Rhythm' and 'Better Than That'. Those who love gospel's rich roots are urged to check them out.

I'm looking for copies of The Pilgram Traveler's Proverb Lable Recordings, old Placards, Pictures etc.
If anyone have info I would appreciate it!! Thank You in advance
Sharon Phillips

Hello There, I'm trying to source the lyrics for the Pilgrim Travelers' "How Jesus died" but am having no luck. Do you have any suggestions? Thanks, and here's hoping in anticipation. Bob Gillies