The Sweet Sorrows: The couple who fuse Celtic music and Americana

The Sweet Sorrows describe themselves a "nomads with a passion to travel the globe, delivering a blend of Celtic/Americana/roots music, but traditional and original, inspired by the journey of life in all its fullness." Consisting of Ulsterman Sammy Horner and his Australian-born wife Kylie, the duo have now left their home in Wexford, Ireland to embark on a major tour across the USA and have also just released an album, their fourth, 'Celticana'.

Sammy has achieved more in his five decades-long service of Christian ministry than just about anybody else and although fame and fortune have eluded him, his achievements - the songwriting bassist and frontman of the Celtic rock team The Electrics; the first and many would say the best musician to fuse Celtic and contemporary music together; a children's minister with five albums and two books to his credit; the recorder of numerous solo albums; a career which has seen him play with some of the finest artists on the music scene including Buddy and Julie Miller, Rich Mullins and Phil Madeira, the latter producing The Sweet Sorrows' 'Celticana' - show no signs of having inflated his ego.

I met up with Sammy and Kylie at a house concert in Stourbridge. It was in 2010 that Cross Rhythms last conducted an interview with Sammy and it was clearly time to catch up on how he and his wife have become the travelling and recording adventurers they are today. The beginnings of The Sweet Sorrows history could hardly have been darker. Sammy's marriage of 20 odd years had ended in divorce and being permanently away from his Glasgow home he was working himself into a place of exhaustion. He admitted, "I was doing over 250 concerts a year and it was killing me, and I actually mean that literally. I hit a point where I almost died. I'm a wee bit bipolar so I swing a bit but I was living in almost a constant state of massive depression. Everything seemed to be going wrong and yet people see you do it and they assume that because you look like you've got it together, or you say things that sound like you've really analysed your life or something, they assume that you're okay. But actually when I was playing I sort of did look like I was kind of okay, I think. At least that's what I thought; clearly that was not the case. And then I hit rock bottom, took a massive break down in Australia, spent three months. . . Do you remember Alex Legg who sadly passed away? Alex probably literally saved my life by not leaving me alone, making sure I ate, made sure if he left the house, I was with him: I was that bad. And then eventually I ended up in Bangkok on my own where I almost died in a hotel room - it was very rock 'n' roll, but very tragic. But I sort of came to my senses after that. It sort of was like, 'well, you can die or you can pick yourself up. It probably would have been around then that I really felt like, 'right, anywhere I'm asked to go, I'll just go - if I can get there I'll go', because music seemed to be the one place I could function, and it was during that period I met Kylie."

Kylie had done ballet for 10 years but never professionally and for 30 years had worked as a nurse in Australia. She did however have some singing experience. "I did singing in worship bands and covers bands a little bit, certainly in the Middle East. I started out in cover bands but I never danced on the stage, apart from ballet concerts at Christmas time. Anyway, when I saw Sammy he was on a tour of Australia with John Smith. I thought Sammy was a man that was not in a great place. But he sang these songs that reached places in me that needed to be reached. Neither of us were actually in wonderful places when we met each other, but regardless of that there was a spark and we just really felt like, 'okay we'll stay in contact'. That was going to be difficult as he was living in Scotland and I was in South Australia. I found myself wanting to care for this man."

By 2012 Sammy, who is an ordained Methodist minister, found himself working as a Baptist pastor in Toronto, Canada. Kylie and Sammy were married in 2012. Explained Kylie, "I nursed right up until I left Australia in March 2012. I couldn't nurse in Canada so then I worked out how to a) be married, and b) be a pastor's wife, and that was where we started married life."

Working mainly with the children and teenagers, the church loved what Sammy was able to do with them. They even gave Sammy 10 weeks off so that he could tour the USA. Kylie would occasionally sing with Sammy. They sounded good together then, as Sammy explained, "We just thought, 'well, maybe we could do it together'. So we had an attempt at making a record in our own little basement studio, and we hit the road about a year later for a 10 week tour and d'you know the weird thing is when you do something new you just don't know if anybody's gonna like it, and lo and behold, they did, they liked it, and so off we went."

That album 'It All Belongs' got an enthusiastic review in Cross Rhythms. Andrew Wallace wrote, "The lilting, wistful 'Helper' showcases Sammy's world-weary, husky vocals and Kylie's dreamy vocals combining at their best - a wonderful blend throughout. The airy, breathy, kicking 'It All Belongs' urges us to thank God in all circumstances. 'If I Knew How To Tell You' is a full-on, bluesy slice of rock as Horner asks God to speak through him. 'Benediction' ends things with a rousing take on the traditional Irish Blessing." 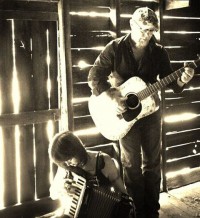 Sammy continued The Sweet Sorrows' story. "We hit the road and we just kept going. The contract [with the church] finished in Canada. We were on the road for two years solid. Just on the road. That was partially to do with visa issues. The marriage was only recognised by the visa in Canada, so when we left Canada we had to find another country [to take up residence]. Which meant that we moved every month, or every two months, to different countries. We just stayed on the road and after two years we thought, 'we need to find somewhere to settle'. We tried to move to America but we still didn't get the visa after two years. We went to Ireland and went into the local Police station and got Kylie a resident's visa - it took 15 minutes! It was that easy."

And so the hard touring couple were finally able to settle in Wexford, Ireland. In 2016 The Sweet Sorrows released 'Can'ticles: Love Songs For The Not So Perfect'. As Kylie emphasised, "'Can'ticles - note the apostrophe in there." Sammy quickly added, "Don't pronounce it 'Can't-tickles' - ever!" So what's with the strange name? Said Kylie, "it's songs about love, but, exemplified by we are not perfect, at all. And we were working out how to live together and working out the nuts and bolts that you do; it's part of relationship. And a lot of those songs still resonate because people are like 'Oh! That's us!' So it was a play on words that he came up with. He's the theologically trained one, you know. But love songs for the not so perfect. Sammy's favourite song on the album is 'One Last Nerve'. We play it every night that we play."

Sammy explained, "The tagline is 'I've got one last nerve and you just got on it.' Actually the mid-eight is directly from the Song Of Solomon. A number of years ago I wanted to do an album called 'Canticles: The Song Of Solomon' and this was when I was doing like three albums a year for the record companies. But none of them would touch it because theologically I insisted Song Of Solomon is not an allegory, it is actually erotic prose. So they wouldn't and this was in the day when I was tripping over record deals, but they wouldn't do it."

Kylie spoke about the positive response the songs on 'Can'ticles' received wherever they were performed. "It didn't matter what land mass we were on, we were singing to people that were dealing with life and therefore it resonated with them, you know, they were listening to stuff about their lives. They're not the only ones going through this, there is somebody else going through this. We use a lot of transparency in humour when we do live stuff and so that then marries with what we bring to the music. I mean, the musicality of the songs that he writes and the lyrics, they hit people right where they are, you know, they scratch their itch sort of thing."

In 2016 The Sweet Sorrows released the 'Back To Ireland' album. Again, it received a hugely enthusiastic review in Cross Rhythms, Andrew Wallace writing, "We then go on a journey, packed with the imagery of our Celtic landscape, folklore and heritage, of love stories, jigs and reels and more well-known traditionals such as 'Carrickfergus' and 'Raggle-Taggle Gypsy' all performed with effortless ease. 'Pour Me A Pint' is a delightful ballad which recounts an encounter with the Living Water. Sammy's intelligent and witty songwriting and Kylie's evocative vocals are a delightful blend and 'Benediction' caps off an engaging and varied album in fine style."

The decision to record an Ireland-themed album came about indirectly because of the song "The Blessing" which, based on an ancient Celtic blessing, has turned out to be by far Sammy's most popular creation. He commented, "Where I go people ask me to play that song. I never want to record it again. I've recorded it five times now! But I've learned one lesson in this music thing, you sort of really do need to give people what they actually want and not what you think they want all the time. And so they got an Irish-themed album."

And now 'Celticana' has been released. Recorded in a hastily set up home studio at The Sweet Sorrows' home in Wexford, it has the renowned American musician Phil Madeira producing it. Said Sammy, "It's a mixture of Americana and Celtic music. We'll have peddle steels, fiddles and Irish fiddles and actually the name came from Alex Legg. We were going to make an album called 'Celticana' then Alex passed away so we never got the chance. So it's a mixture of the Americana which Phil's brilliant at and a mixture of the Celtic which, let's face it, I'm brilliant at so it should be brilliant at every level! (Sammy laughs.) We've got songs about relationships, we've got songs about, you know, we've got a few scars but they haven't healed over. . . We've got songs like 'when anger burns a bridge. . . '" Kylie completes the line, "'When anger burns a bridge, forgiveness teaches us how to swim.'"