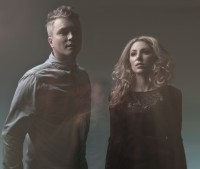 The release of The Weathering's 'The Sea Cares For Its Own' by Britain's brightest independent label 7Core Music has brought to discerning music lover's attention one of the most intriguing alt pop offerings for a long while. As it turned out, half of The Weathering is singer/songwriter Jeff Caylor, whose independent albums 'Okay' and 'When Birds Dream' so impressed Cross Rhythms that in 2010 we tracked him down in Hong Kong, where he lives with his wife Leora (the other half of The Weathering). Now with the release of the duo's 'The Sea Cares For Its Own' clearly it was time for an update. Describing the music themselves The Weathering call their work "Thoughtful, indie pop with atypical hooks, electro-rhythms and strong vocals. We're what The Swell Season might have been if Glen Hansard had listened to a little more Postal Service."

Cross Rhythms began by asking Jeff how he met Leora. "We first met in the gym at our apartment complex! It turns out we had mutual friends in music in Colorado so became fast friends and began to make music together almost immediately. It wasn't until after we married in 2010 that we decided to officially form our band called The Weathering."

So what is the idea behind the song "The Sea Cares For Its Own"? Said Jeff, "The title actually has a lot of meaning to us but sometimes when you explain the specifics of your own music it loses meaning for others so we often avoid it. To put it simply, water is the atmosphere of the sea and it sustains the life of the sea. Just like our atmosphere gives us life. Personally it's a really grand picture of God."

In an interview with Louder Than The Music Jeff spoke about the songwriting process. "Most of the time, it starts with a lyric idea and melody. From there we add a solo instrument and finish out the melody and harmony. Once we start producing the track, it can take a very different feel. It's a process we really love. Also, most of these songs were not written on the instruments that we typically perform on. Leora wrote several on piano but I usually play piano at our shows. Similarly, I started a couple of the songs on guitar but rarely perform on the guitar." 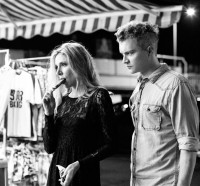 Leora's favourite track on the album is "Where Other Ghosts Gather", described succinctly by the singer/violinist as "life, death and hope intermingled in all of it" while Jeff plumps for "Horses". "I love the way the lyric came together and I love performing that one. I grew up in the midwestern USA - I truly miss that part of the world in autumn. This song takes me back to that place."

Jeff spoke about his feelings towards the secular/sacred divide that is still a part of the thinking of many Christians. "We are pro-music. And in terms of music designed for the Church to express specific ideas about God, we are pro-orthodoxy. Most of our songs express spiritual ideas but they are more abstract than some people prefer, but we are so grateful that a lot of people seem to like our music and folks like you are willing to give it more exposure!"

So how did an American couple living in Hong Kong get to tie up with a UK record label? Explained Jeff, "Trevor Michael (founder of 7Core Music) has been a friend for quite a few years and we've worked together on multiple projects. I think our first introduction was on a Mark Tedder project in 2005."

How does The Weathering define success? Said Jeff, "I think everyone wants to do what they love for a living and I feel like we do that now. But when it comes to The Weathering, we want to make people think. We want to draw people into that conversation in their heads that they turn off most of the time and get them to live there for awhile. We want to make a difference and generate positive, meaningful changes through the atmosphere of this music."