The Welcome Wagon: Are you ready for alternative pop country folk gospel?

Tony Cummings reports on a New York minister and his wife, THE WELCOME WAGON, and their unusual take on gospel music 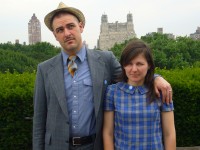 As any devout follower of current musical tastes will tell you, there is today a large following for indie-pop-cum-new-folk artists and Christian acts like Sufjan Stevens and Danielson who have been leading the charge with critics falling over themselves to praise the off-centre acoustic eclecticism of such acts. Now a new name has emerged onto the scene, The Welcome Wagon, and judging from the copious praise that the Sufjan Stevens-produced 'Welcome To The Welcome Wagon' has already received (Cross Rhythms' Mike Rimmer making it one of his Best Albums Of 2008 and journalist Andree Farias calling it "the best album Sufjan Stevens never released") things are looking exceptionally promising for a duo who by their own admission had no serious intent to enter the world of recording.

The Welcome Wagon consist of Rev Thomas Vito Aiuto and his wife Monique. Vito is the pastor of a church in Williamsburg, Brooklyn and if the good reverend's name strikes a chord with Sufjan Stevens fans one should refer them to "Vito's Ordination Song" on Sufjan's critically acclaimed 'Michigan' album. Vito was born in Tecumseh, Michigan, and attended Western Michigan University where he developed a love for writing poetry. His first book of poems, Self-Portrait as Jerry Quarry, was published by New Issues Press in 2002. A self-described agnostic, Vito experienced a spiritual conversion at the age of 20 and soon after enrolled at Princeton Theological Seminary to study theology and prepare for ordained ministry. Currently he is the senior pastor of Resurrection Presbyterian Church, a church he planted in Williamsburg, Brooklyn, NY, in 2005.

Monique was raised on a farm, by a gentleman farmer father and choir teacher mother, in the same small town as Vito. She moved to New York City after high school to study art, first at the Cooper Union (BFA), then Columbia University (MFA). Since then she has worked as a pre-school teacher, craftmaker for Martha Stewart, and as a mother.

Mike Rimmer and I spoke to Rev Aiuto on a recent Rimmerama programme. We began by asking him about his church. He responded, "I planted the church with a lot of other folks here who wanted to see a church able to serve this area that we're at. It's an area that has a big cross section of a lot of different communities. There used to be a lot of Italian Americans here but now there's a lot of Polish folk and some Hasidic Jewish folk and then lately in the last 15 or 20 years a lot of people have moved here who are involved in the arts and music and so on. So until recently there weren't many English speaking churches here. That was part of why I was called here to help start a congregation."

In view of his church's ethnic mix I suggested that The Welcome Wagon's music should have been Messianic Latin polka. He laughed, "Yea it's true, those communities, although we live alongside each other, are pretty disparate in a lot of ways."

Vito went on to explain how he got involved in music making. "I took piano lessons. I wasn't really raised in a religious environment and when I became a believer in college it was so important to me so I sort of had the idea that if we had music in our home we could all sing together. I wanted to learn the piano because it was a great instrument but I didn't really have the knack for it and didn't really practise very much. I always felt this guilt and would turn up at my music teacher's house knowing that the last time I laid an eye on the piano was the previous week that I was there. So I decided to buy a guitar instead. I haven't really become that great a guitar player but it's just an easier instrument to play. I just taught myself to bang out chords and that's what I do." 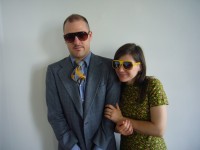 So how did a Princeton-educated minister from Michigan end up playing gospel music with strong folk and country influences? "That's a good question, I don't think I really know the answer to it. I think the regional music just about anywhere is not lost, it's kind of underground. It wasn't as if I grew up in Michigan with a distinct local music. I grew up on the Beatles, I grew up listening to my mum and dad's record collection which was some Broadway shows and Beatles and some country records so those are the things that end up seeping out. Then of course working so close with Sufjan, I learned to play on my own but also play his music in early incarnations of his band. So when I started to write songs it took on a lot of the [folk-orientated] forms of his music because that's kind of how I learned to play."

Responded Mike Rimmer, "You mentioned Sufjan Stevens who produced your album. He's also a member of your church isn't he? Replied Vito, "Well I'd rather not talk about what he does religiously but we definitely have a long relationship and have been able to share things about our faith in the past."

The Sufjan-produced various artists album 'To Spirit Back The Mews' released in 2001 on Asthmatic Kitty (the label formed a year earlier by Stevens and his stepfather) featured The Welcome Wagon's first recorded performance, "There Is A Fountain Filled With Blood". So how come it took so long for the Wagon to deliver a full set of songs? "We honestly never started thinking about it as an album until a couple of years ago. We would just record for fun and record because Sufjan had a habit, especially a couple of years ago, for recording everything and I mean EVERYTHING. He would say, 'If you have any new songs. . .' and this was at a time when I barely knew how to play guitar! So he would record us sitting in our living room and then he would add some things and bring it back. We would listen to it and say, 'Gosh, that's great,' because he would be able to adorn things in a way that was wonderful. So we put a lot of these recordings together and that's when we started to think [of making a record]. It took so long because it was never in the forefront of our minds. Sufjan toured a lot and I was planting a church and we have a family. But in the last year or two we started to say 'we have to get this done.'"

Vito is the first to admit that 'Welcome To The Welcome Wagon' SOUNDS like a Sufjan Stevens album. "Everyone says that. It definitely does. There's no doubt that Sufjan has been a great influence on us. He helped produce it, he played on it and in a lot of ways our music is a collaboration with him. If it's unfair to anybody it's unfair to him because we made a lot of decisions that he wouldn't have made. Everything that took place we had the final say on and that isn't to over emphasise our role in it, but he really played the role of a servant. So anything that went on the record or any decision that was made stylistically we had the final say. Having said that, our record is a thousand times better because of Sufjan's presence on it."

Several of the songs on the album are reworked spirituals and with Monique's childlike voice and Vito's plain but effective guitar the timeless quality of songs like "He Never Said A Mumblin' Word" and "Hail To The Lord's Anointed" leave their mark. For an album which so powerfully communicated spiritual truth the source of a couple of the songs is somewhat unusual. Said Vito, "I don't remember hearing 'Jesus' by Velvet Underground until a couple of years ago. I had a couple of Velvet Underground records but not the one that this song is from. Sufjan played it for me. The reason we started playing it is because the original version is really quiet and Monique and I would play it with just a guitar and glockenspiel - that's how we originally did this song. We went into the studio and brought in Sufjan and we brought in horns and guitar and a nine or 10 person choir and then we just made it into this huge gospel thing. We loved how it turned out."

Equally surprising is the inclusion of The Smiths' "Half A Person". It's inclusion on a gospel album wasn't, Vito assured Cross Rhythms, meant to be provocative. "Everything that we did on this record was intuitive," he said, "and it was also just the things that we liked. I mean, we started playing that song years ago when we would play live in these little clubs. And again, Monique and I would play them as a couple, on the guitar and glockenspiel. I just love the chord changes, they're just insanely good and the words are funny and beautiful too. We mainly started playing it so we could say 'back scrubber' in the chorus. Then when it was time to start recording again Sufjan knew that we played that song. Like with most records we had about six or seven extra songs. 'Half A Person' was just one of the ones we liked enough to put on."

Did Vito see a long recording career stretching out for The Welcome Wagon? "I don't know and I'm not too concerned about that. Maybe we'll make a whole lot of records but it could be that this is the only one we're ever going to make. I don't think we'll ever quit singing and playing together but whether or not we end up making another record... I can't describe to you what a gift this is from Sufjan and Asthmatic Kitty and our friends and the people who hosted us at their studios. We had a record release show three or four months ago at our church and there were about three or four hundred people there. I feel like there's been a gift from all of these people. To us our music is all about our relationship with our God and our friends. So this album is all gravy and if it was to happen to us again that's great. But if it doesn't, then that's fine too."

Awesome... reading this article puts so many things into perspective: Vito Aiuto's personality, Sufjan Steven's humility, and the love that their faith engenders. Their work is clearly God's way of supporting his people in a growing reformation of his Church accross this country and around the world.